Indiana Resources Ltd’s (ASX:IDA) review of historic government and termite mound sampling assay data has highlighted a significant untested gold trend on the Koussikoto Licence situated on the eastern side of its West Mali Gold Project.

The new trend at Koussikoto is at least 7.5 kilometres long and defined by historic one kilometre by 250 metre Mali Government sampling, 400 metre by 200 metre infill sampling and historic sampling of termite mounds at approximately 400 metre by 50 metre spacing by previous operators.

Infill sampling is planned by Indiana at 200 metre by 50 metre spacing prior to planning for possible drill testing.

It is important to note that there has been no drill testing of anomalies along this new trend which represents a significant and previously unrecognised target at the West Mali Gold project.

Over 27 kilometres of strike of significant gold anomalism has been identified in the project area to date, across four major trends.

The technical review work recently undertaken was supported by the completion of Indiana’s 2019 exploration activity in Mali.

The work conducted will now form part of the planning for the upcoming exploration season commencing in October 2019. 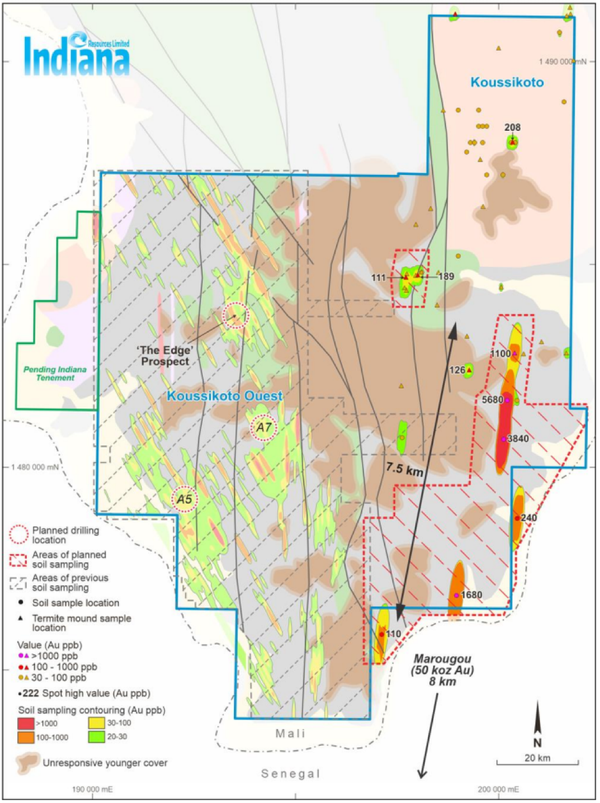 The consistent anomalies identified to date appear related to north–south and northwest-southeast trending structures within or adjacent to the Main Transcurrent Zone (MTZ).

The MTZ is interpreted to be one of the major structures which control mineralisation in Western Mali and Eastern Senegal. 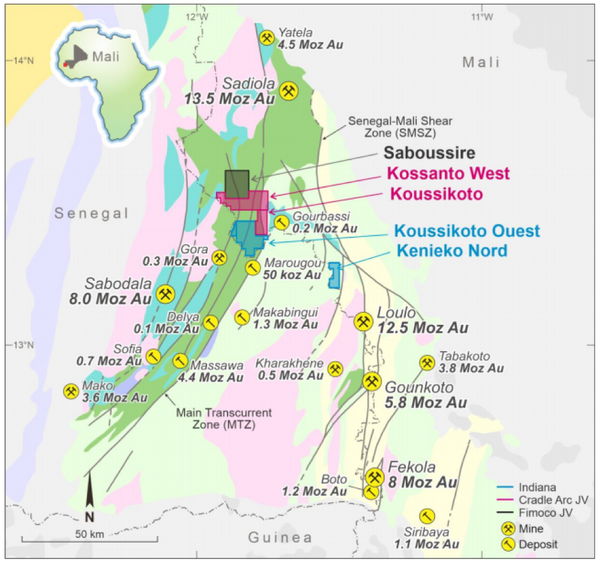 The company will be conducting detailed geological mapping of high priority targets at Koussikoto, Kenieko Nord and Saboussire.

Soil geochemistry data will be collected at these targets using a 200 metre by 50 metre spacing.

Both reverse circulation and diamond drilling will be undertaken at The Edge to infill the 200 metre long high grade zone and test the extent of mineralisation down plunge to 500 metres below surface as indicated below. RC and diamond drilling will also be conducted on existing sections at A5 and A7 to confirm orientation of mineralisation followed by step out RC drilling on 40 metre spaced sections north and south.