In conjunction with this, Vulcan has re-totalled the collective Mineral Resource estimations for the Upper Rhine Valley Project (URVP) area within the Zero Carbon LithiumTM Project.

Following the acquisition and interpretation of seismic and well data, the updated and reclassified Taro Indicated JORC Resource Estimation is 830,000 tonnes contained Lithium Carbonate Equivalent (LCE) at a grade of 181 mg/l Li.

The updated Taro Inferred JORC Resource Estimation has been revised upwards to 1.44 million tonnes contained LCE at a grade of 181 mg/l Li.

Vulcan’s Upper Rhine Valley Project (URVP) Li-brine resource is now estimated to collectively contain 16.19 million tonnes LCE at a grade of 181 mg/l Li (Indicated & Inferred, 90% of which is in the Inferred Resource category), making it the largest JORC lithium resource in Europe.

The large resource size is significant in that it provides Vulcan with the opportunity to become a major supplier of lithium chemicals into European Union markets.

Vulcan aims to use its project to produce the lowest CO2-eq. footprint lithium hydroxide for electric vehicles in the world from its unique Zero Carbon LithiumTM Project in the Upper Rhine Valley.

As well as being highly beneficial for the company, this further highlights management’s strong business acumen in taking the initiative to purchase high quality seismic data.

From a broader perspective this will increase confidence in a large portion of the Taro Resource to a JORC Indicated category, which allows it to be taken into account when the prefeasibility study (PFS) is undertaken.

It is worth noting that the Inferred part of the Taro Resource has also grown with the new interpretation from the data.

Overall, the Taro Resource has grown by 60% since Vulcan released the maiden resource in August.

Commenting on the significance of these developments, Vulcan managing director Doctor Francis Wedin said, “Using our recently acquired seismic data to advance the 3-D geological model and well data to advance fault zone hydro-dynamics, we’re pleased to have upgraded a 39% portion of the Taro Resource to the “Indicated” category, as well as increasing the size of the Taro Inferred Resource.

‘’This higher confidence resource area is being integrated into our PFS, which is on schedule for completion.

‘’This is in line with our strategy to become a supplier of our unique Zero Carbon Lithium® hydroxide to the European battery electric vehicle market.”

The Taro Exploration Licence as shown on the following map has been granted to Global Geothermal Holding UG (GGH). 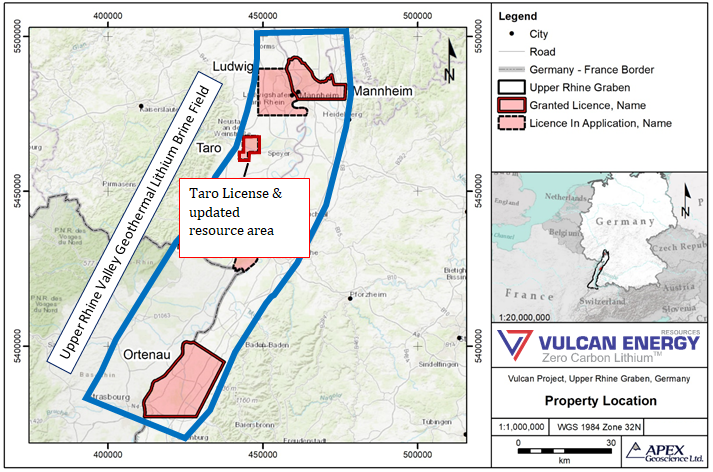 Vulcan has an agreement with GGH to earn a 51% interest by spending €500,000 within two years of the license grant (Initial Expenditure).

The company has met this Initial Expenditure requirement, allowing for a Joint Venture to be formed, with Vulcan owning 51% and GGH 49%.

Vulcan will now spend a further €500,000 to earn an additional 29% (Second Earn-In Expenditure) within two years to take its JV interest to 80%.

GGH can then elect to co-fund the project on a pro-rata basis or be diluted by an industry-standard formula whilst Vulcan continues to develop the project.

Should GGH be diluted below 5%, its share will be converted to a non-diluting 2% net royalty.

Prior to this development Hamburg-based Alster Research analyst Oliver Drebing reaffirmed his buy recommendation in October, upgrading his price target from $2.45 to $2.55 (€1.45 to €1.55).

This price target is now looking increasingly within Vulcan’s reach with its shares having surged 60% from approximately $1.00 a week ago to more than $1.60.

The PFS should be the next major catalyst, and this could well see the stock trading not far shy of Drebing’s price target.