Ahead of a brief site visit prior to kick-off exploration in July, management has provided some background on the project.

Prospect-scale indicators include localised copper, silver, zinc and lead mineralisation, including bornite and chalcopyrite, and the occurrence of veins, veinlets and stockwork zones.

The presence of walk-up targets at EPM27124 will assist the company in getting the drill bit turning earlier. 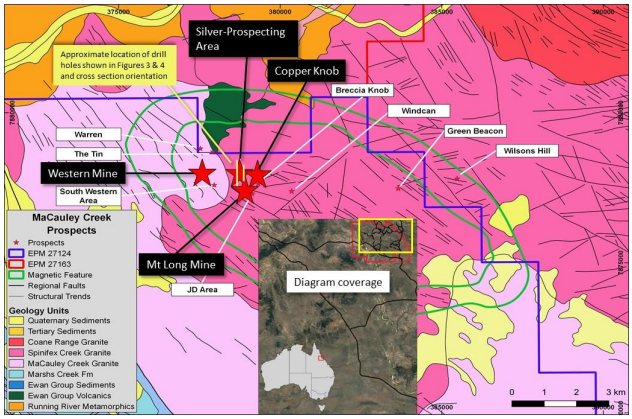 Three phases of mining/exploration were completed within the area which EPM27124 now covers.

Historic small scale mining took place at ten locations as shown above, principal among these being Western Mine, Mt Long Mine, Silver-Prospecting Area and Copper Knob.

Most recently, RMA completed remote sensing, geophysical and geochemical programs and drilling between 2006 and 2015.

As well as sampling and geophysics surveys, the latter of which generated multiple targets that were not followed up, RMA completed two phases of drilling.

The following graphic shows some drill results from exploration conducted by both NQM and RMA. 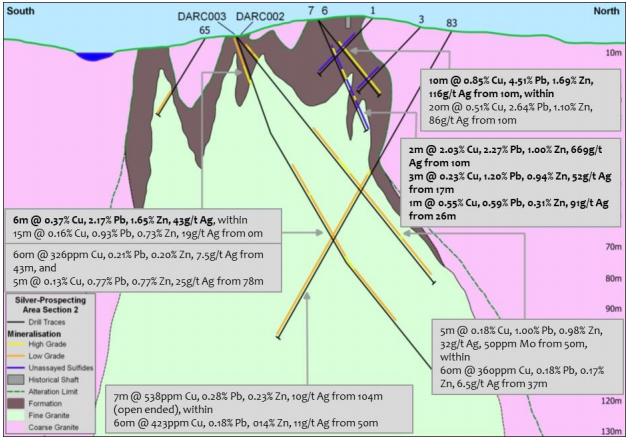 These included a 460 metre rotary air blasting (RAB) focusing on the historic mine sites and a 1130 metre reverse circulation (RC) program.

The RAB programme’s average hole depth was 8.0 metres below surface.

Like the deeper holes by NQM, the deeper RC holes of RMA were drilled at the various small mine workings.

Management is of the view that past exploration validates and strengthens the porphyry potential of MaCauley Creek.

Significant copper, lead, zinc and silver mineralisation has been identified in past drilling at shallow depths of less than 100 metres, and these remain untested.

Gold was largely not tested for in the past (NQM), but where present (RMA) it was associated with copper, molybdenum and silver.

The geophysics survey conducted by RMA, which produced targets at depths of more than 100 metres remain untested.

From an overall perspective, the geochemical pattern of various porphyry pathfinder elements such as copper, silver and molybdenum is also reminiscent of porphyry mineralisation.

Consequently, management is eager to commence its exploration program.