Very few junior exploration companies are finalising a circa US$10 million earn-in agreement with a major. Nor do they have a genuine first mover advantage to a nearby country particularly in a sector as hot as battery metals. However, Inca Minerals Ltd (ASX:ICG) ticks both boxes.

Only 24 hours after the management of Inca Minerals informed the market of its intention to pursue opportunities outside its established Peruvian operations, the company has lodged three Exploration Licence Applications (ELA) in the Democratic Republic of Timor-Leste (commonly known as East Timor).

In particular, Inca Minerals intends to look for exposure to battery metals in East Timor.

Consequently, projects being targeted, including those announced today are prospective for metals such as nickel, cobalt, copper and vanadium.

The Paatal ELA will be focusing on vanadium and phosphate as these two commodities are often found together in that area, similar to deposits in the US and Peru.

Inca has also generated the Ossu multi-commodity project which is targeting gold and silver as well as cobalt and copper.

The other ELA relates to Manatuto which hosts known podiform chromium mineralisation extending over a 2.5 kilometre strike length with grades between 35% and 51% chromium identified in prior sampling. It will also be looked at for Ni and Co.

Inca to remain active in Peru

Until now, Inca Minerals’ strategy has been to acquire and explore base and precious metal projects in Peru with a view to developing these projects into possible mines or demonstrating their value to others.

To that end, Inca currently has two polymetallic exploration projects located in Peru, Greater Riqueza (Riqueza) and Cerro Rayas, each of which has its own characteristics.

A South32 (ASX:S32) funded geophysics survey was completed at Riqueza in 2018 resulting in the discovery of a considerable number of large porphyry and porphyry-skarn targets.

In turn this led to the commencement of negotiations between Inca and South32 of an earn-in agreement (EIA).

This is being negotiated and the first-year exploration program designed.

On completion of those negotiations, and commencement of an agreed first year exploration program, Inca will manage the exploration and expects the vast majority of this exploration to be funded through the earn-in funding amount.

The negotiations have already delivered an agreed earn-in funding amount of $US8 – 10 million for South32 to acquire 60% of the project.

Consequently, the company remains extremely active in this area and by no means will its diversification into battery metals dilute its interests in Peru. Indeed, Inca is fully aware that Peru is prospective for battery metals.

Exploration at Cerro Rayas has to date focussed on the known mine workings historically exploited for zinc-silver-lead.

These metals featured strongly in Inca’s sampling which led to a broader mapping and sampling program resulting in the identification of several additional mine workings and highly prospective geology in proximal areas.

Management believes Cerro Rayas could follow a similar if not more rapid trajectory than Riqueza.

In the event this occurs, Inca’s exploration in Peru will and must remain extremely active, and the company has the ability to ramp up activity as required.

With the relevant commodity prices forecast to remain attractive, both projects have the potential to significantly add value and underpin future growth.

Being mindful of the global appetite for a diverse range of resources, management has recently refined its strategy to consider new and additional projects with commodities such as vanadium, cobalt, nickel and phosphate.

The Board, senior management and its technical advisory panel has experience with many of these commodities and believes that, provided it can secure the right project in the right jurisdiction, it is well placed to explore, build and demonstrate value through careful investment of shareholder funds.

This brings us back to the company’s foray into East Timor where it should have a first mover advantage.

As indicated below, East Timor lies to the north of Western Australia. 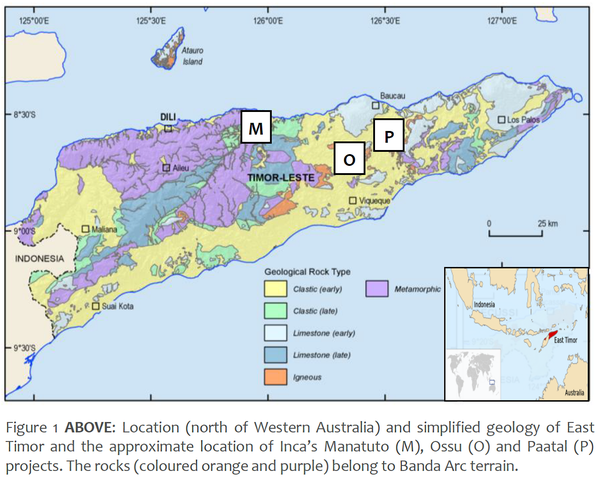 The project area at Manatuto hosts known podiform chromium mineralisation extending over a 2.5 kilometre strike length with grades between 35% and 51% chromium identified in prior sampling.

Manatuto is located inland from the northern coastline of East Timor, 40 kilometres east of the capital city Dili, and it can be accessed via a sealed national highway.

High-grade gold and silver at Ossu

Mineralisation at grades of between 3.0 and 4.0g/t gold, 70.0g/t silver and 10% copper have been recorded in a UN Report in large in situ boulders within the Ossu ELA.

Ossu is 14 kilometres north of the provincial town of Viqueque, 80 kilometres south-east of Dili and it can be accessed via a sealed national highway.

Vanadium and phosphate at Paatal

According to a 2003 United Nations report the target area hosts phosphate rocks grading between 9% P2O5 and 22% P2O5.

Paatal is 100 kilometres east of Dili, close to the northern coastal town of Baucau, and it can be accessed via a sealed national highway.

The phosphate mineralisation at Paatal is characteristic of sedimentary marine or upwelling-style phosphate deposits with the phosphate occurring in unconsolidated marine sediments (limestones, marls, shales) as dark brown nodules.

As well as following up on the significant phosphate mineralisation, Inca plans to test the occurrence of related vanadium mineralisation.

In the US as well as in Peru, vanadium and phosphate may occur together under certain depositional conditions.