Like Lorna May, the first IOCG-focused project acquired by Inca, Frewena Fable is located in the Northern Territory.

A stand-out feature of Frewena Fable is the walk-up drill target called the Tamborine Anomaly.

This very large scale target contained entirely within the project area is five kilometres in diameter, has a circular shape and has clear IOCG affinities.

The market has responded positively to the news with Inca’s shares surging more than 30% shortly after the announcement was released. 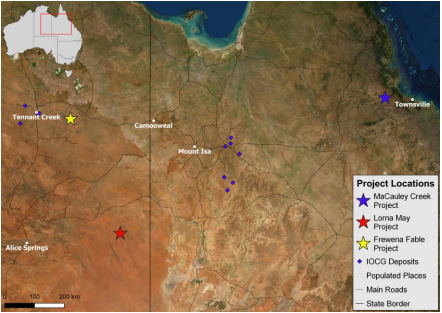 The company has focused on early-stage exploration opportunities with Tier-1 credentials within known and developing IOCG/porphyry provinces in Australia.

This not only provides stronger opportunities for exploration success, but it can also assist in attracting partners that can assist in financing and technical support.

Inca has demonstrated its ability to facilitate such arrangements, having secured South32 (ASX: S32) as an earn-in partner at Riqueza in Peru.

Inca is building on its knowledge of this type of mineralisation, as Riqueza is considered prospective for Tier-1 porphyry and skarn deposits.

Management is now replicating the strategy of attracting major mining houses as partners to early-stage projects in Australia.

The MaCauley Creek, Lorna May and now Frewena Fable acquisitions illustrate this strategy is progressing well.

In discussing the promising nature of this acquisition and fit with the group’s broader strategy, managing director Ross Brown said, “With MaCauley Creek and Lorna May, our Australian portfolio of projects with Tier-1 IOCG and/or porphyry potential has reached critical mass.

“Success-based development of these projects, including value-adding, low-cost exploration and upfront partnership talks, is a very clear path for us.

‘’In broad terms, our aspiration as a junior exploration company is to have a significant free-carried position in multiple first-class exploration projects with multiple partners.”

MRG Resources which was a party to the MOU has conducted desk-top studies and helicopter-supported reconnaissance.

Desk-top studies included a review of archival exploration data conducted in the vicinity, assessment of the government AEM survey data, mentioned above, and ASTER satellite data acquisition and interpretation.

The helicopter-supported reconnaissance site visit was designed to investigate specific targets generated in the desk-top review.

This work culminated in the generation of a very large target called the Tamborine Anomaly.

As we discussed earlier, Tamborine is viewed as a walk-up target as it has an expression which is considered reminiscent of a near-surface IOCG deposit.

Roughly circular in shape as can be seen below, Tamborine is approximately five kilometres in diameter and hosts several coincident geophysical, ASTER and topographical features.