Both projects have been acquired through the execution of legally binding Memoranda of Understanding (MOUs) and through open ground tenement applications.

Inca will solely fund exploration to earn a majority interest in each project, with MRG retaining a 10% and 5% free-carry to bankable feasibility study for MaCauley Creek and Lorna May respectively. MRG also has a net smelter royalty of 1.5% at both projects.

MaCauley Creek and Lorna May represent Inca’s foray into Australia in the pursuit of large-scale, or tier-1 scale mineral deposits.

The company has focused on early-stage exploration opportunities with tier-1 credentials within known and developing porphyry-IOCG provinces in Australia. MaCauley Creek is located 75km west of Townsville and Lorna May is located 300km east of Alice Springs, as can be seen on the map below. 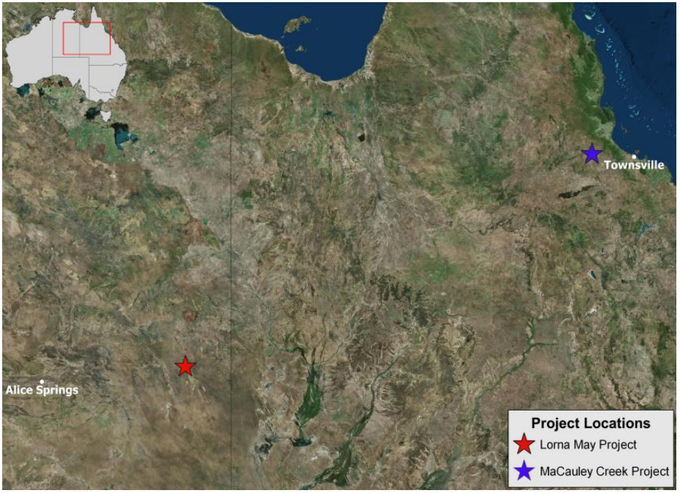 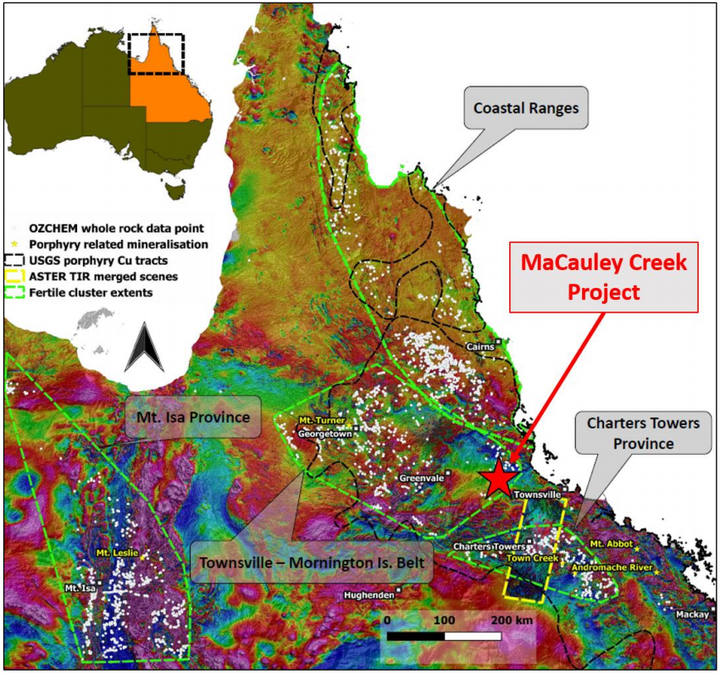 The coincidence of magnetics, radiometrics, mineralisation, alteration, veins/veinlets/stockwork within a suite of granitic intrusions (including porphyritic intrusions) is very positive. Walk-up targets occur on both tenements, which are anticipated to be granted in two to four months’ time.

Porphyry-focused exploration will initially concentrate on delineating the known zones of mineralisation and further modelling the geophysics data. 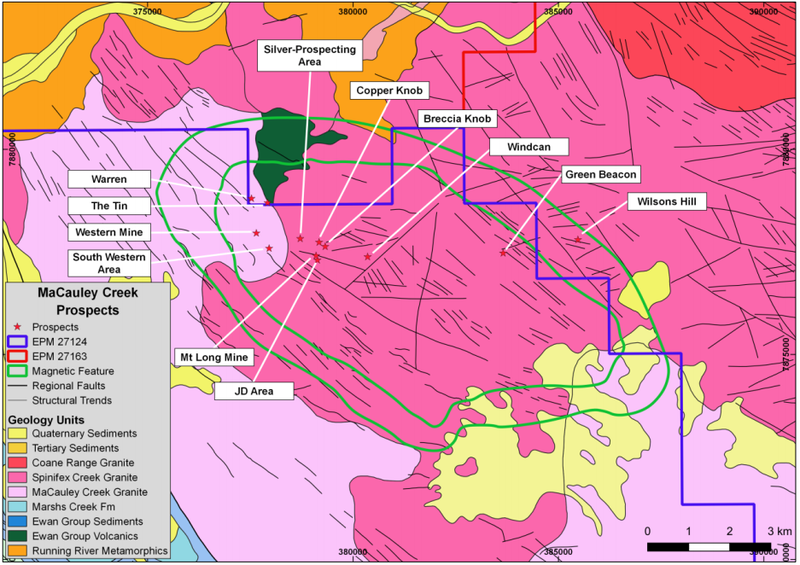 The NT Lorna May comprises a single tenement application (EL32107) with an area of 786km2 . Several major conductive anomalies that strongly correlate to multiple magnetic and gravity anomalies, define a corridor approximately 7km long which is considered highly prospective for buried IOCG-style deposits. 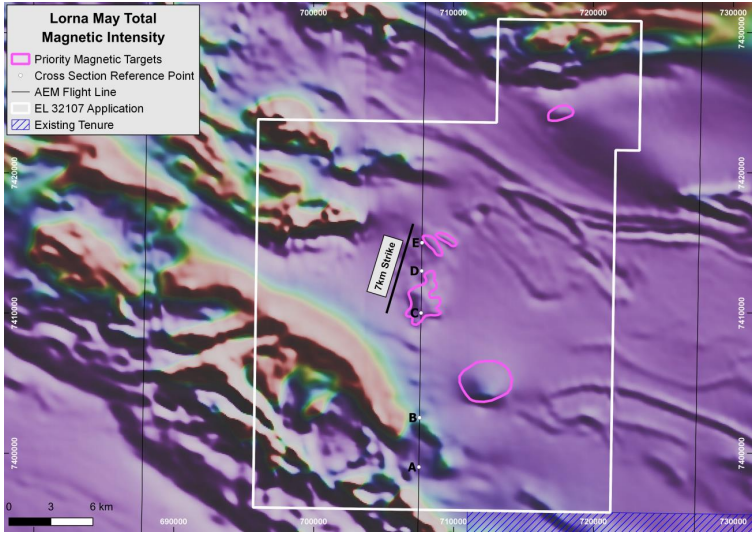 Below is a conductivity cross section of Lorna May corresponding to the NS array of magnetic anomalies shown above. The cross section shows, what is interpreted to be, blanket sedimentary cover ±100m thick (horizonal red area) with broad conductive anomalies extending to depth (vertical red-yellow area). Corresponding to the magnetic anomalies (A-E) the shape and complexity of these conductive bodies is believed related to possible IOCG-related intrusives/breccias.

The coincidence of large-scale magnetics, conductive and gravity targets makes Lorna May highly prospective for buried IOCG mineralisation. It is well placed in terms of its geological setting with other IOCG deposits in the region. The EL32107 application is governed by the Aboriginal Land Rights (NT) Act. The company looks forward to progressing this application towards grant as quickly as possible.

Inca Managing Director, Ross Brown commented on the acquisitions, “This is a tremendous development for Inca and its shareholders. We have acquired two new projects very cost-effectively, but which have the potential to develop into tier-1 prospects. In this way, we are copying the trajectory of Riqueza, which was recently partnered with South32. In other words, we are implementing exploration strategies geared for growth whilst restraining expenditure.”

Inca last week updated the market on its Riqueza Project in Peru, which is considered prospective for tier-1 porphyry and skarn deposits.

As previously announced, Inca has secured South32 as an earn-in partner at Riqueza in Peru.

Inca confirmed that three programs of the year-1 Inca-South32 exploration campaign at Riqueza have commenced:

Year 1 exploration at Riqueza is focused on reducing the search area from “project-scale” to “drill target scale.” Like geophysics, the current programs are designed to generate targets. Areas with geophysical, geochemical and satellite targets that coincide with specialised mapping priority areas, will be elevated in terms of drill target status.

“Each of these initial programs are designed to provide an additional layer of information critical in the definition of potential drill targets. Additional 3D modelling of high priority geophysical targets is being considered for the same purpose.”

Inca intends to replicate this strategy of attracting majors as partners to early-stage projects in Australia. Its focus is on new projects with clear tier-1 porphyry and IOCG potential, such as MaCauley Creek and Lorna May.

Geologically, the formation of porphyry and IOCG deposits is similar. They are created as a result of pervasive and widespread hydrothermal activity associated with igneous intrusions. As rising magma intrudes cooler country-rock, super-heated fluids are flushed upwards and outwards causing alteration and mineralisation.

Examples of IOCG and porphyry deposits in Australia include:

These deposits illustrate the potential size and grade of IOCG and porphyry deposits in general, although we can’t infer that similar tonnages and grades are known at MaCauley Creek and Lorna May.

BHP’s discovery of IOCG mineralisation at Oak Dam located 65km SE of their Olympic Dam Mine includes a drill intersection of 18om at 6.07% Cu, 0.92g/t Au and 12.77g/t Ag. Another significant discovery is one by Rio Tinto near Telfer in WA. Vein-style Cu, Au, Ag mineralisation has been identified over a 1.4km strike length, open at depth and north, south and east.

News of partnerships include several majors and juniors in pursuit of porphyries and IOCG deposits in Western Australia, South Australia, the Northern Territory and Queensland. Importantly, the zones of mineralisation discovered by BHP and Rio Tinto were discovered under significant sedimentary cover. These “blind deposits” illustrate the importance of geophysics as a means to generate targets with tier-1 credentials. This reaffirms Inca’s exploration strategy.

The majors have significantly stepped up exploration for porphyry and IOCG deposits in Australia in an effort to secure long-term copper production.

As a consequence of this increased activity, there is an opportunity for juniors to become involved. Indeed, Inca has monitored this development over the past 18 months and, with a partnership with a major already formed, is now well-placed to propel its exploration strategy forward as it seeks to generate, incubate and value-add porphyry and IOCG projects now in Australia.