Copper junior, Hot Chili (ASX:HCH), has released a positive quarterly report for the three months to 30 September 2018, showing strong progress on its exploration activities across its portfolio.

HCH said it is open to further project acquisitions and has completed a maiden 5,000m drilling program across two of its three recently secured high-grade copper mines in Chile: San Antonio and Valentina.

HCH has informed shareholders that it is well-positioned to take advantage of any potential acquisition opportunities within trucking distance of its flagship Productora Copper Project in Chile. 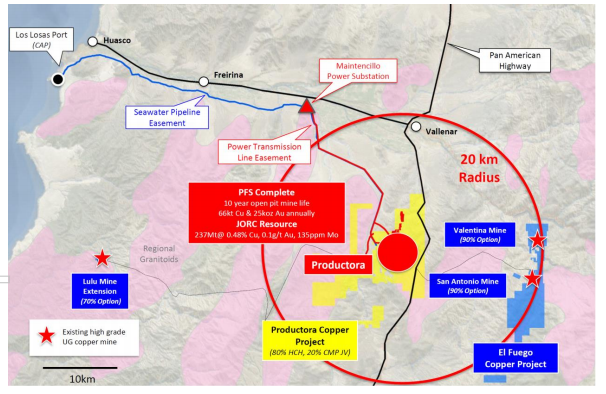 Recently completed drill work at the San Antonio mine has confirmed large extensions of high-grade copper below the shallow developed region of the mine.

Thanks to the highgrade nature of mineralisation and low strip ratios, San Antonio looks to be a key addition to HCH’s large-scale open pit inventory.

Final drill results from the maiden drilling campaign at San Antonio include: 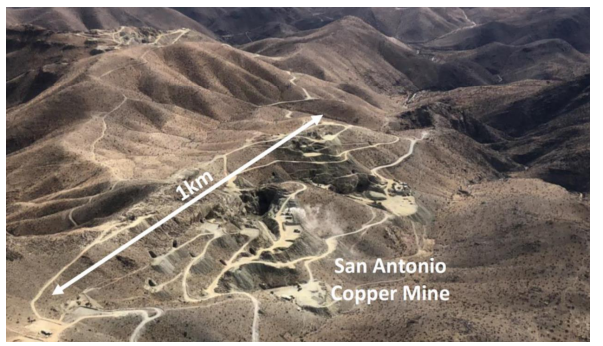 The results highlight the strong continuity of shallow high grade copper mineralisation over 700m strike, as demonstrated in the map below. 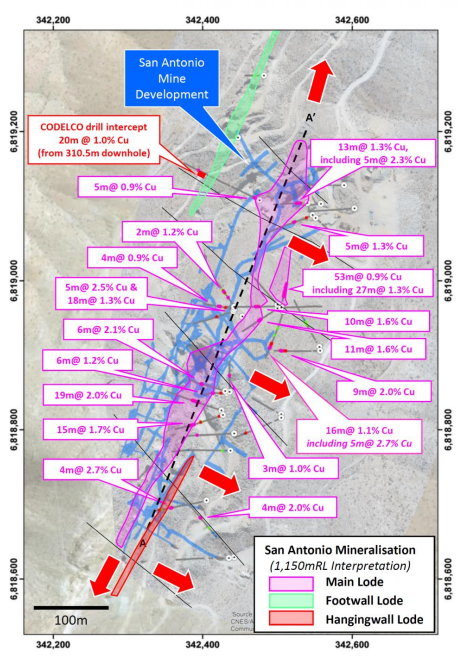 The company is now in the advanced stages of submission to commence follow-up and resource definition drilling.

As a result of the maiden program, HCH believes the San Antonio mine could have a considerable impact on the head grade of its future copper production plans.

Coming in at 1.5Mt copper and 1.0Moz gold, the mine is shaping up as the first of several high-grade copper deposits that the company is looking to incorporate into its large-scale bulk tonnage Productora copper development, which is 20km to the west.

In addition to the program at San Antonio, three shallow drill holes were completed in the southern region of the Valentina copper mine.

Valentina, which is located 5km north of San Antonio, returned some promising results:

The holes have confirmed significant strike and depth extension potential to high-grade mineralisation (as seen below) and close association with chalcopyrite and bornite: 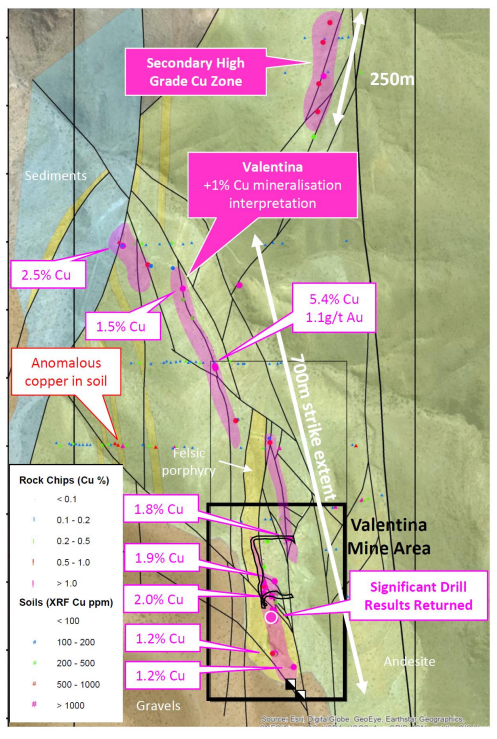 HCH notes that extensive work in the lead-up to drilling at Valentina revealed the following:

The company has noted that mineralisation intersected in historical drilling has been successfully located and is fault-hosted, dipping towards the east within volcanic-sedimentary units.

The company intends to undertake follow-up drilling to expand coverage across the larger striker potential of Valentina ahead of resource definition activities.

In light of its highly promising drill results and ongoing acquisition opportunities, HCH is well placed for its planned resource definition drilling in 2019.