Hot Chili (ASX:HCH) has performed strongly in 2019, reaping the rewards of a considerable acquisition and exploration program that has laid the foundation for the company to establish multiple feed sources for its large-scale Productora copper development in Chile.

News released on Monday morning that it has raised over $12 million in capital at 3.6 cents per share to continue to fund its exploration and development initiatives indicates that the company is well-placed to accelerate its expansion into 2020.

Central to its success have been world-class drilling results from the Cortadera copper-gold discovery which lies only 14 kilometres from the Productora development. 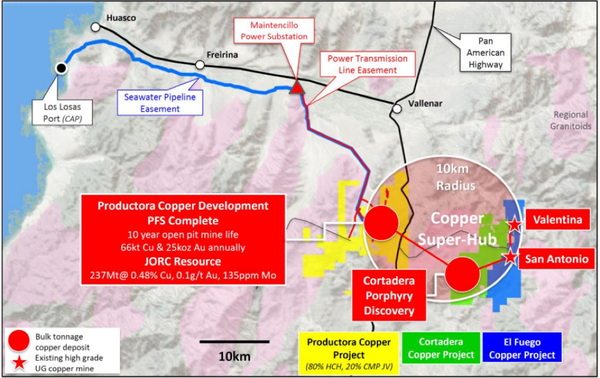 Investors have realised the implied increase in valuation attributable to the group’s assets, resulting in the company’s share price increasing more than four-fold in 2019.

Just last week the company went close to matching its 12 month high of 4.3 cents, but its moving average over the last three months has mainly hovered between 3.2 cents and 3.5 cents.

Consequently, today’s news that the company has raised substantial funds at a price of 3.6 cents per share should be well received.

While this provides a strong financial footing for the company, management said that it will continue to advance its longer-term strategic funding discussions with several groups, while completing its phase 2 drilling programme aimed at defining a significant initial resource at Cortadera.

Funds raised from the placement will be used for satisfaction of the remaining US$3 million part-payment for the first instalment of the Carola Option Agreement, completion of a 15,000 metre reverse circulation and diamond drilling programme at Cortadera, and general working capital.

The incorporation of diamond drilling into the exploration program will test promising mineralisation at depth that has been delineated in shallower drilling to date.

Discussing the significance of attracting prominent investors and maintaining full control of Cortadera, managing director Christian Easterday said, “We are very pleased to be attracting new high quality investors to the company who share our view that Cortadera is showing all the hallmarks of a company-maker.

‘’This funding support allows Hot Chili to maintain its ability to control 100% of Cortadera through the most value accretive stages of a major global discovery.

‘’The company will continue to advance its longer-term strategic funding discussions, while focusing our efforts to establish Cortadera’s credentials as one of the world’s top potential standalone copper-gold developments.”

The release of results for the second diamond hole of its phase 2 drilling programme at Cortadera is imminent, and this could provide further share price momentum.

The drillhole was designed to test a potential 300 metre extension to high grade copper-gold mineralisation at Cortadera’s main porphyry where the company unexpectedly intersected a wide 440 metre zone of strong mineralisation between 340 metres and 780 metres down-hole.

Drilling of this hole was terminated at 1,133.5 metres owing to significant deviation in dip and azimuth of the hole away from the intended deeper target.

Hot Chili has now commenced its third diamond hole of the phase 2 programme, which is initially focused on defining and expanding the discovery of a high-grade core to the deposit.