Hot Chili Limited (ASX:HCH) has provided a promising update on progress with its diamond drilling campaign, 14 kilometres from the company’s large-scale Productora copper development in Chile.

In particular, the group is recording exceptional widths of mineralisation from shallow depths which is extremely encouraging given that the company’s initial focus is on the definition of a recently discovered high grade zone at Cortadera's largest porphyry (Cuerpo 3).

In management’s words, this is now ‘revealing the presence of a vertically extensive high grade core’, substantially enhancing the bulk tonnage underground development potential of Cortadera.

New results returned for diamond drill hole CRP0019D have confirmed high grade copper and gold at end-of-hole indicating a significant broadening of the distribution of the high grade zone at depth.

In addition, an extraordinary 970 metre width of mineralised and strongly mineralised porphyry has been recorded from surface in diamond drill hole CRP0020D, with results expected to be released shortly.

The definition of further mineralisation will go a long way to achieving management’s goal of incorporating Cortadera into a source of supply for the Productora Copper Development, effectively creating what the company refers to as a copper super hub. Potential for Cuerpo 2 and 3 to join at depth

The first expansion diamond drill hole (CRP0029D) is currently well-advanced, and is designed to be drilled to a depth of 1,000 metres testing the northern extension of Cuerpo 3.

Mineralised porphyry has been recorded from a depth of 320 metres down-hole to its current depth of 580 metres.

Management plans to drill a further 8 to 10 diamond drill holes to expand the size of the two largest porphyries at Cortadera (Cuerpo 2 and 3) and test whether these porphyries join at depth.

Diamond drilling is scheduled to continue into 2020, supporting a first resource estimate which is planned to be undertaken in the June half.

The addition of a large high grade zone and expansion of the existing discovery look likely to outline a large standalone copper resource and a centrepiece to the company's ambitions to establish a major copper production hub on the coastline of Chile.

The locations of new drill results in addition to CRP0020D and CRP0029D where assay results are pending are outlined below. 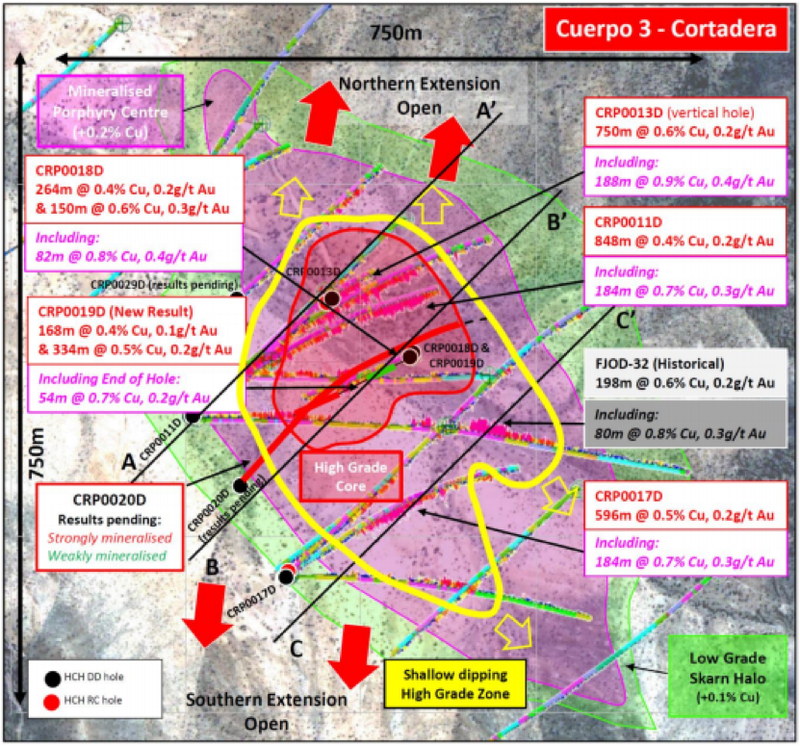 Results for CRP0020D are expected to be released shortly followed by first results from CRP0029D over the coming weeks.

Just last week, Nick Raffan from Veritas Securities did a deep dive into the Cortadera project, as well as take into account the company’s other assets.

While noting that the natural owner of a large porphyry copper development is a major company he fully supported management’s intention to accelerate drilling to add value for shareholders in the short to medium term.

Indeed, a project of this scale will invariably benefit from a major mining group coming on board as a substantial shareholder or joint venture partner.

Such a development could see Hot Chili undergo a rerating as it would provide some degree of certainty regarding funding.

This scenario isn’t uncommon as evidenced yesterday when BHP entered into a new share subscription agreement with SolGold Plc (SolGold) under which BHP will subscribe for 77 million new SolGold shares for an aggregate subscription price of £17 million.

SolGold is the majority owner and operator of the Cascabel porphyry copper-gold project in Ecuador.

Following completion of the private placement, BHP’s interest in SolGold would increase from 11.1 per cent to 14.7 per cent.

BHP has agreed to pay 22.15 pence per SolGold share, which represents a 9.3 per cent premium to the 20 day volume-weighted average London Stock Exchange price of 20.26 pence per share as determined as at last close on 22 November 2019.

Under the terms of the new share subscription agreement, BHP will also receive options over 19.25 million SolGold shares which are exercisable until 25 November 2024 at a price of 37 pence per share.

Raffan noted that drilling to date has continued to increase the overall size of the project towards a tier 1 target of 5 million tonnes copper metal insitu.

Raffan initiated coverage with a speculative buy rating and placed a short term price target of 7.5 cents per share (undiluted) based on his insitu copper metal assumption and peer comparison analysis.

More specifically, he said, ‘’We see our estimate for the current defined size of the deposit the basis to our valuation, as well as highlighting that there is no ‘discovery’ or market expectation built into the HCH share price.

‘’Our price target is supported from ongoing drilling returning broad copper-gold intervals prior to potential upside from extensional drilling at Cuerpo 3 North and Cortadera North.’’

Raffan noted that the Cortadera deposit’s average grade is equivalent to similar medium to very large copper and copper-gold deposits in the Americas.

Consequently, management’s strategy in terms of building a large resource to meet the scale of what are considered ‘medium to very large’ deposits is crucial in making the transition from a copper mine to a copper hub.

The Cortadera deposit’s average grade is equivalent to similar medium to very large Cu and Cu-Au deposits in the Americas. As a simple scenario, a Cortadera mining inventory of 500Mt of sulphide ore (excluding the chalcocite blanket at surface) could provide a 20 year mine life at 25Mtpa producing in excess of 100ktpa of Cu in concentrate + 100kozpa Au credits from an open cut then bulk tonnage underground operation.