Pointing to the likelihood of further positive news, management said that the 350 metres drill intersection is expected to grow with the imminent return of assays for a further 90 metres of strongly mineralised porphyry, registering CRP0017D as a third stand-out drill result for Hot Chili at Cortadera.

Drilling is continuing to lift the status of Cortadera as one of the most significant global copper-gold porphyry discoveries of recent times.

As a backdrop, Cortadera is a privately-owned, major copper-gold porphyry discovery located along the Chilean coastal range, where historical world-class discovery drill results have only recently been publicly released by Hot Chili in February 2019.

On February 22, 2019, Hot Chili announced the execution of a formal Option Agreement to acquire a 100% interest in Cortadera. 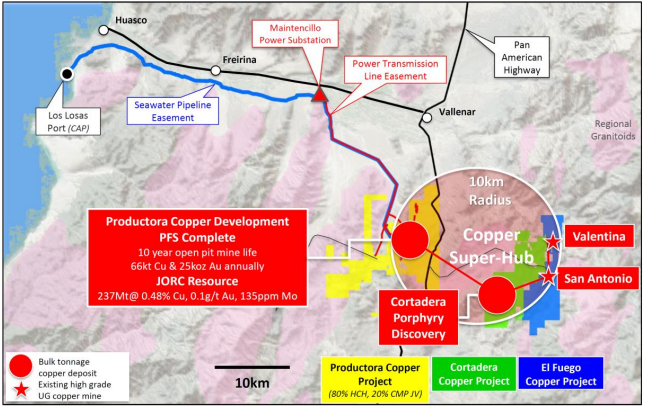 Although results for a further 440 metres of diamond core are pending, CRP0017D has already delivered another stand-out drill result, recording 350 metres grading 0.6% copper and 0.2g/t gold from 344m down-hole depth.

The result confirms that the newly discovered, bulk tonnage, high grade zone extends from the northern to the southern flank of the main porphyry (Cuerpo 3), over 300 metres from the discovery diamond hole CRP0013D (188 metres grading 0.9% copper and 0.4g/t gold from 516 metres down-hole depth).

The following plan view of Cuerpo 3 shows the location and basic geology of the mineralised post porphyry in relation to the location of recent drill results. 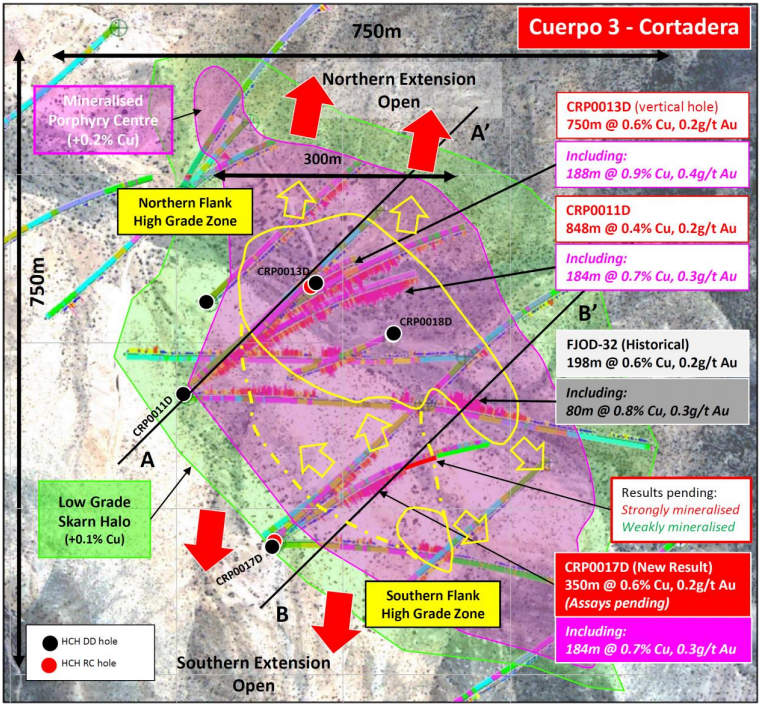 Hot Chili reported earlier in the month that CRP0017D was terminated early owing to significant deviation from its intended target at depth (northern flank of high grade zone).

Management will investigate options to utilise CRP0017D as a potential wedge hole to target this area of the main porphyry in the future.

A third deep diamond drill hole (CRP0018D) is already underway and the company is now fully funded to complete up to 15 additional deep drill holes as part of its phase 2 programme, aimed at rapidly expanding Cortadera ahead of an initial resource estimate.

CRP0018D is currently at a depth of approximately 360 metres and is planned as a vertical one kilometre deep drill hole.

Definition of a high grade core to the discovery will be an early focus of drilling which will then transition into step-out drilling across the largest two porphyries at Cortadera.

A strong flow of drilling updates and results is expected to continue into 2020 as the company advances through a very exciting discovery phase, which looks set to establish Cortadera as a potential stand-out, large-scale, global copper-gold development.

Having completed a $12 million institutional placement this month, the company is well-placed to continue its aggressive exploration program.

While exploration news has largely contributed to a doubling in Hot Chili’s share price over the last six months, including a surge of 60% in the last month, this could be the forerunner to further momentum that unfolds following the release of the initial resource estimate.