Diamond drilling (DD) has expanded the growth potential of the Cortadera copper-gold deposit, confirming larger potential than management had anticipated.

As a backdrop, Cortadera is privately-owned and historical world-class discovery drill results have only recently been publicly released by Hot Chili. 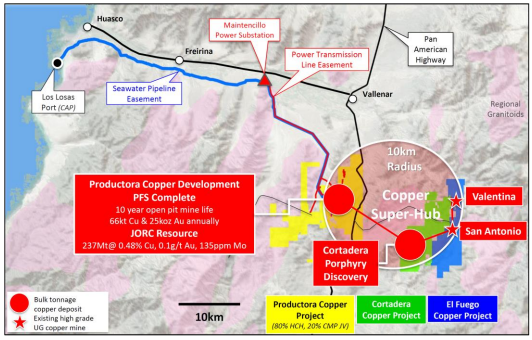 In February, Hot Chili negotiated a formal option agreement to acquire a 100% interest in Cortadera, and in early April the company commenced a drilling program aimed at confirming and extending areas of surface enrichment and wide, higher grade copper-gold sulphide mineralisation which had not previously been closed off by 23,000 metres of historical drilling.

Results for the first two DD holes are expected to be received in the coming fortnight.

However, at an early stage it is evident that both holes potentially point to significantly larger scale of the main porphyry (Cuerpo 3) at Cortadera than the company had first recognised.

Given Cortadera’s close proximity to the large-scale Productora copper development it will fit with management’s strategy of establishing two bulk-scale deposits as part of a large regional copper production hub.

Management’s initial confirmation drilling programme is currently focused across the Cuerpo 3 deposit, the largest of the three porphyry centres discovered to date at Cortadera.

Recent results confirmed this, highlighting increasing grade with depth down-hole in several of the RC holes at Cuerpo 3.

Consequently, the potential upside from deep diamond drilling could be significant.

The first DD hole completed was designed to test and close-out the north-west extent of the Cuerpo 3 porphyry.

Surprisingly, the hole recorded a wide intersection of porphyry from much deeper down-hole than expected, while extending further north than anticipated.

Though the majority of the wide porphyry intersection in that hole appears to be moderately mineralised, it highlights a distinct change in the orientation of the porphyry body towards the north.

This is important as it indicates Cuerpo 3 is now extending north with approximately 300 metres of width not closed off by any drilling as indicated below. 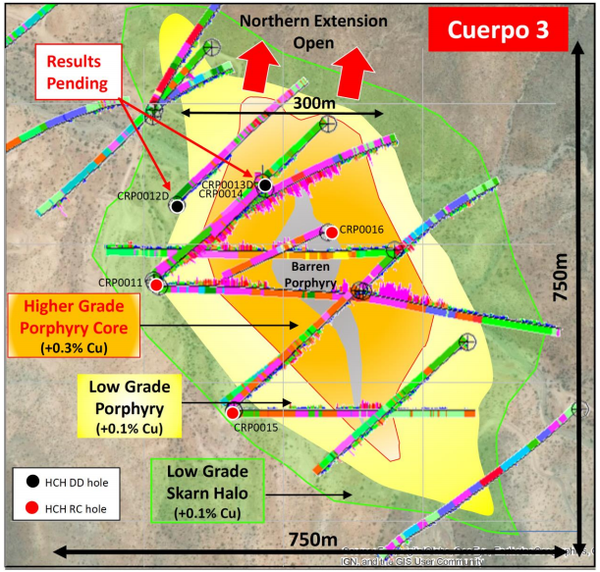 This will test the extent of a potential higher grade core of Cuerpo 3 as indicated on the left of the above schematic.

The hole is currently at a depth of approximately 840 metres and is now planned to extend to a depth of about 1000 metres following visual confirmation of increasing alteration and vein intensity associated with copper sulphide mineralisation.

Previous work had highlighted a potential increasing grade profile with depth (evident for copper, gold and molybdenum) across Cuerpo 3.

The company is dedicating two DD holes from the current phase of drilling to test this observation.