Hot Chili Ltd (ASX:HCH) is kicking goals and has recorded the best drilling intersection in the company’s history. These are the best results to date at its Cortadera Copper Discovery, part of the group’s Productora Copper Super-Hub in Chile.

So good were the results that its share price was up approximately 10%, with the stock recording 12-month record volumes this morning.

The result from drill hole CRP0013D is comparable to some of SolGold’s (TSX/LSE:SOLG) early discovery drill results, which outlined the beginnings of a bulk tonnage, high grade zone at depth on its world-class Cascabel copper-gold deposit in Ecuador.

Having delivered outstanding results, the drillhole has been terminated early at 1185 metres vertical depth in mineralised porphyry, with assay results pending for the remaining 360 metres of the hole.

Cortadera becomes the jewel in the crown

Hot Chili’s managing director Christian Easterday highlighted that the assay results from the first two diamond holes have transformed the company’s view of Cortadera and opened up large possibilities in saying, “We have achieved one of the world’s standout copper-gold porphyry drill intersections at Cortadera, one that is comparable to some of the best discovery drill results of recent times.

“At an average grade of 0.9% copper and 0.4 g/t gold, the new high grade zone currently has a vertical extent of approximately 190 metres.

“What is really exciting is that this new high grade zone is completely open in all directions at depth, and is similar in combined average grade and depth to SolGold’s high grade zone at its world-class Cascabel discovery in Ecuador.

“The results from CRP0013D (illustrated below) demonstrate that Cortadera has the potential to become a company-maker in its own right and will likely dwarf our existing Productora project located 14 kilometres away. 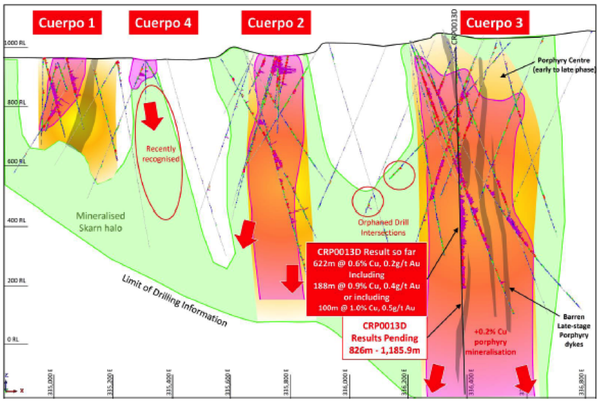 Hot Chili is now pausing its drilling activities while waiting for remaining assay results from CRP0013D.

The company will then plan the next steps towards commencement of a second phase of drilling ahead of establishing a preliminary resource estimate at Cortadera, a much anticipated event now given the prospect of a large resource.

Interestingly, Cortadera was going to be a source of feedstock for Productora, in essence its little brother.

Now, as Easterday says it would appear that Cortadera could well be the jewel in the crown.

As you can see below, the Cortadera Porphyry Discovery was a satellite deposit of the Productora copper super-hub.