History would attest that Chile has not been a notable copper producer.

However, the current interest in Chile’s copper resources could change the past as Hot Chili (ASX:HCH) looks to lead the way in creating a copper super hub in coastal Chile.

Recently HCH released a new presentation for the RIU Explorers Conference highlighting how its latest deal could not only transform the company, but also the region.

Just this morning, HCH announced that it had executed a formal Option Agreement for the acquisition of Cortadera. The agreement covers Carola’s Vallenar landholdings adjoining HCH’s Productora and El Fuego copper projects.

Cortadera looks to be a game-changer.

Hot Chili CEO Christian Easterday certainly believes so. He told Finfeed “It is very rare to put your foot on a major discovery, let alone one that the world had not seen previously and which lies 14km away from where we have invested $100million into our own major development. It changes everything for our company.”

Cortadera is located just 14km from Hot Chili’s flagship Productora copper development and is said to hold “one of the most significant set of copper-gold porphyry discovery drill results since SolGold’s Cascabel discovery” in Ecuador.

Cascabel is expected to come online in the near future and has the support of Australia’s largest gold producer, the $19 billion capped Newcrest Mining (ASX: NCM), which recently upped its stake in SolGold to secure a portion of the Cascabel.

BHP is also a major player in the region and operates the Escondida mine, the world’s largest copper producer in Northern Chile. The company is looking to expand its holdings, having increased its stake in SolGold to 11% for a total investment of US$94.2 million.

It is encouraging for HCH that these billion dollar player are expanding their footprint. That activity could mean big things for HCH. “Large copper discoveries are rare, but they are even rarer when they are located in a top mining jurisdiction such as Chile, next to infrastructure on the coast. We have been receiving strong in-bound corporate interest in relation to the Cortadera discovery deal,” Easterday says.

It is not the only activity occurring in the region.

Hot Chili is looking to do something similar by combining Cortadera with Productora to establish the only potential Tier-1 copper developer on the ASX. The market looks like it also agrees, transforming the company’s share price from a 52 weeks low of 1.0 cent (A$8.5 million market cap) to a 52 week high of 3.1c (A$26 million market cap) off the back of recent announcements and mostly following the release of their RIU conference presentation.

What is notable here is that the details the Cortadera discovery have never been released publicly owing to the fact that the Discovery was privately owned. Hot Chili is now beginning to join a lot of the dots with each new announcement outlining what it saw to ensure it focused on securing the deal over an 18-month period with SCM Carola.

With that in mind, Easterday says we should expect to see some major catalysts.

“First and foremost has been today’s formal execution of the option agreement with SCM Carola for the Cortadera Discovery, the commencement of drilling and the announcement of a project level funding partner.”

Finfeed covered the Cortadera announcement back on 4 February, when we reported the unreleased drilling results:

For a full account of the acquisition, see our previous article: 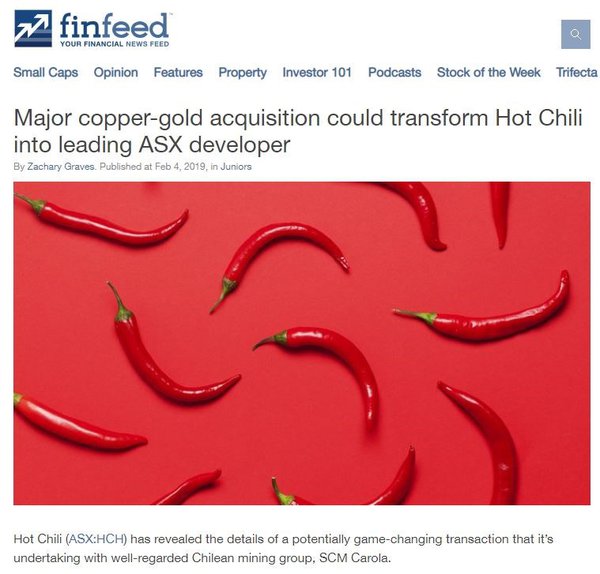 The agreement with SCM Carola for Cortadera as well as an option agreement to acquire the Purisima mining right (executed with a private Chilean group), clears the path for full consolidation of the entire Cortadera copper-gold discovery in Chile.

The real significance of what Hot Chili has done lies in the ability to unify two large copper-gold deposits to instantly create the largest copper developer on the ASX. Hot Chili will be able to leverage central processing and infrastructure, which will look to secure a very low operating and capital cost base – cementing the combined development as one of the cheapest large-scale copper developments available globally. The way it works looks something like this: 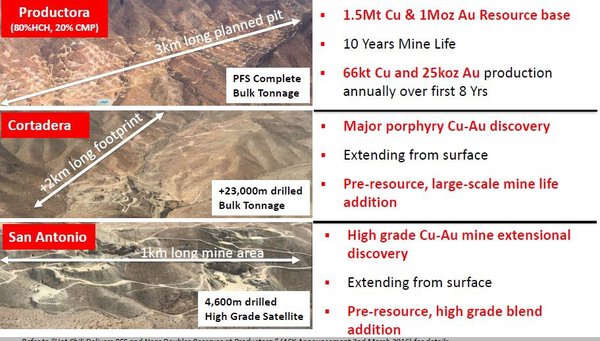 The consolidation comes at a good time at a macro level, with demand supply factors currently working in the company’s favour.

According to experts there is a supply crunch coming. It is expected copper production will peak in the back half of 2019, making a growing supply deficit a very real proposition.

According to Hot Chili, this is what we can expect: 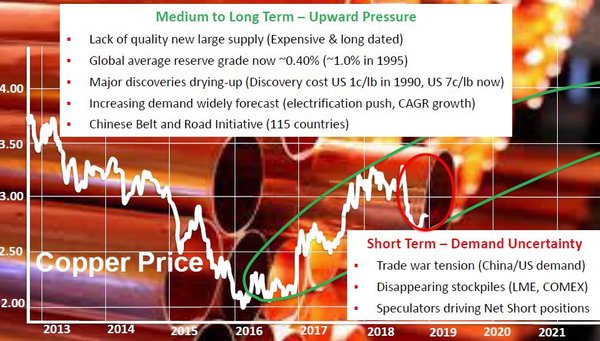 Easterday says HCH is ready to pounce on these factors, “We are moving to position ourselves as the premier copper developer on the ASX within the coming 12 to 24 months and lay the foundations for a potential 100,000tpa copper and 100,000 ozpa gold development. The last time the ASX had a copper developer of that scale was Equinox prior to their takeover by Barrick.”

This year could be a transformative year for the company, with several milestones in the pipeline. Hot Chili is currently holding strategic funding discussions with key stakeholders and will look to mobilise the drill rig in coming months once it has executed its formal Option Agreement with SCM Carola.

Easterday is excited to be commencing resource drilling in Q2 2019, with the commencement of a revised PSF expected in Q1 2020.

He says, “We have a lot of work in front of us now, however there has never been a more exciting time for our company. The final piece of the puzzle is in-place and the view from here is impressive.”

The expectations for Hot Chili are growing and should it be able to succeed with such an ambitious move, it could well have a game changing play on its hands and herald the beginning of new Australian copper champion in the world’s largest copper producing country.