ASX junior Hot Chili (ASX:HCH) has clinched a formal option agreement with a private Chilean group to acquire 100% of a mining right which contains a portion of the Cortadera copper-gold discovery.

Together with memorandum of understanding (MOU) executed with SCM Carola (as also announced separately today), this clears a path for consolidation of the entire Cortadera copper-gold discovery In Chile.

These results, like those announced at Cortadera today, have never been previously released and include:

Extensional and in-fill drilling expected to kick off within the coming months. 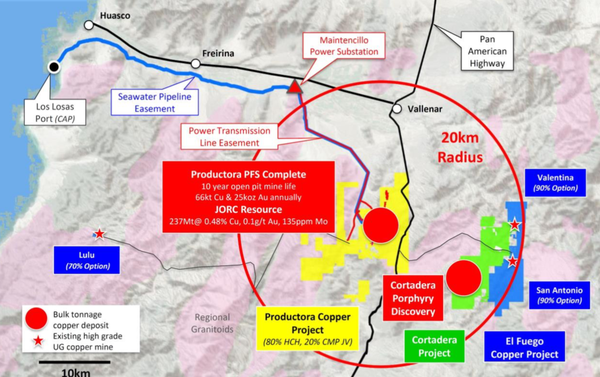 The Cortadera copper-gold discovery lies 14 kilometres directly southeast of Productora and comprises a cluster of three copper-gold porphyry centres extending from surface to depths of 900 metres, as currently drill tested.

Some 4,000 metres of the entire 23,231m of diamond drilling (HQ core) completed at Cortadera are contained within the Purisima mining right, accounting for one of the three porphyry centres discovered to date.

Significant drilling intersections at Purisima, similar to those announced already, reveal wide copper and gold mineralisation from surface which remains open at depth and along strike. 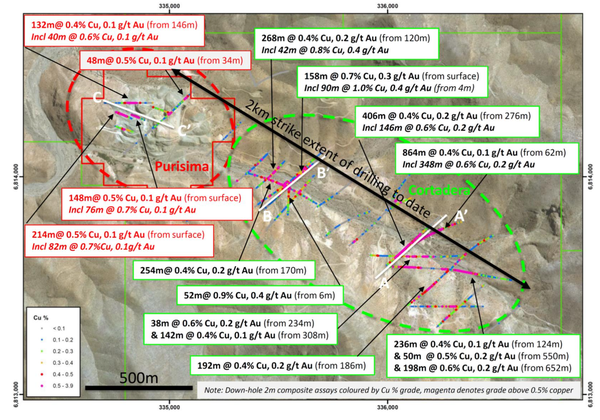 Consolidation of the entire footprint of the discovery zone will allow Cortadera’s growth potential to be maximised along strike.

Within the coming months, HCH plans to begin systematic exploration and resource definition drilling across Cortadera.