Less than a month after expanding its operations and securing a portfolio of vanadium projects in Finland and Sweden, Pursuit Minerals (ASX:PUR) has reported high grade vanadium mineralisation at the Koitelainen Project’s Koitelainen V prospect in Finland.

Nine drill holes from the prospect produced magnetite concentrates with vanadium values ranging from 2.0 to 3.7% V2O5, with a globally significant average grade of 2.3%. These figures place the vanadium mineralisation at Koitelainen V in the upper echelon of vanadium mineralisation globally, as magnetite concentrates from vanadium projects containing greater than 1.5% V2O5 are usually considered high grade.

Through the compilation of historical drilling and assay data, PUR identified nine drill holes at the Koitelainen V prospect on the Koitelainen Project in northern Finland which produced magnetite concentrates with exceptional grades of V2O5, including:

Pursuit is continuing to compile the historical data from 27 drill holes, for a total of 3784m, at the Koitelainen Project to design a drill program to test extensions to the high-grade vanadium mineralisation at the Koitelainen V prospect.

The high-grade vanadium mineralisation at Koitelainen V is associated with three sub-parallel trends of magnetic anomalies which collectively extend for a further 2-2.5 kilometres away from the areas drilled by the nine high grade drill holes. 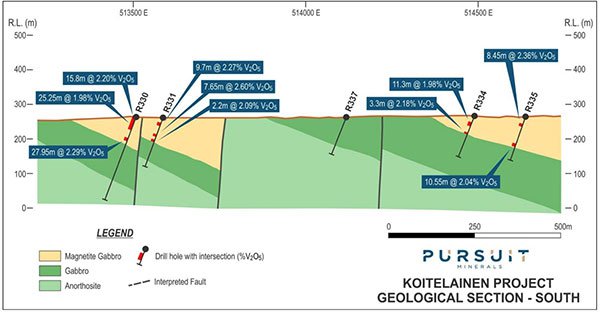 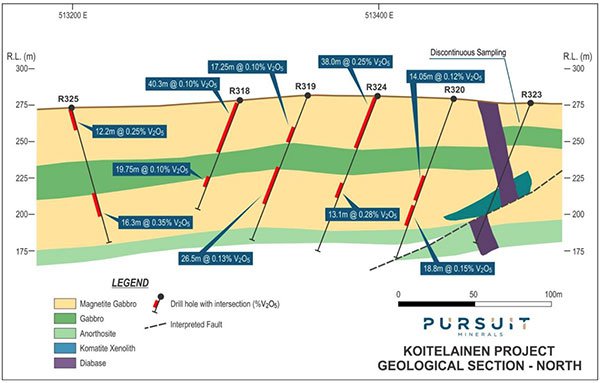 PUR expect that data compilation to be completed in late June and the drill program undertaken during the next winter field season from November 2018 until April 2019.

Sweden has a long history with vanadium, and is the country where vanadium was first confirmed as a metal. Finland, has in the past produced up to 10% of the worlds vanadium from the Mustavarra mine in central Finland and is currently rated the number one jurisdiction globally for developing mineral projects.

Pursuit Minerals Managing Director Jeremy Read said that the V2O5 grades of the magnetite concentrates produced from the nine high-grade vanadium holes in the southern section of Koitelainen V prospect were exceptional and indicate the highly prospective nature of the Koitelainen V prospect.

“The magnetite concentrates produced by these nine high-grade vanadium holes at Koitelainen V place this prospect in the upper echelon of vanadium prospects globally.

“The nine holes are associated with three sub-parallel magnetic trends which extend 2-2.5km beyond the areas drilled with the nine high-grade holes.”