Consolidated Zinc Ltd (ASX:CZL) has begun the year with an “outstanding first phase drilling result” in excess of 27% zinc (Zn) and 60.4g/t gold (Ag) at its flagship Plomosas mine in Mexico.

Having resumed exploration work as quickly as possible following the Christmas break, CZL says its “drilling has successfully improved the understanding of the geological setting, structure and mineralisation prior to a drill out of the area and resource modelling.”

CZL hopes to obtain its Maiden JORC resource sometime later this year after completing a Scoping Study as a priority.

CZL is currently focused on its flagship Plomosas Zinc Project in Mexico, covering 11 exploration concessions spanning over 3000 hectares in the northern Mexican state of Chihuahua. Over 2 million tonnes of ore have been mined at Plomosas in the past, with an average zinc + lead grade of 22% and over 80g/t Ag. CZL currently has a 51% stake in the project, but is aiming to increase this to above 80% subject to milestones being met.

Since the start of this year, CZL has drilled three drill holes for a total of 490m with a fourth currently in progress. Detailed assay results for all four are imminent although preliminary results have already been received for one. 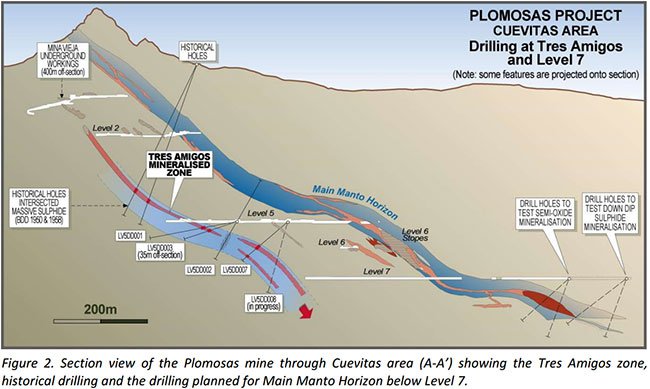 CZL’s Managing Director Will Dix said, “This is an outstanding result for the first phase of drilling...and a great start for 2016. It’s exciting to see our geological model validated with such encouraging results.”

Exploration drilling and further geological analysis remains a top priority for CZL. The company says that “drilling will continue both in the main zone extensions and at Tres Amigos where we [CZL] are working hard towards our maiden resource estimate.”