TSC reports more significant gold has been intersected at Creasy 1 to compliment the standout shallow, high-grade gold results already reported from the inaugural reverse circulation (RC) drilling campaign at the Creasy 1 prospect, within the Rover Project. 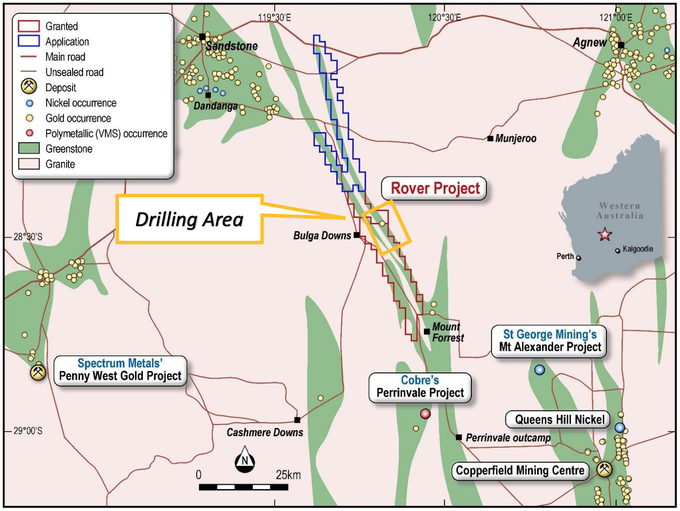 The Creasy 1 target comprises gold mineralisation located along the extensive Illara shear zone which forms part of the 20km prospective gold strike (a component of the Maynard Hills greenstone belt).

Importantly, the RC drilling campaign has confirmed the presence of shallow, high-grade gold at the Creasy 1 prospect that materially eclipses all historic drill results.

All drill-holes from Creasy 1 have now been assayed, with Creasy 2 assays still outstanding from the laboratory.

Six holes from the recent drilling have intersected gold >1g/t:

At Creasy 1 gold mineralisation has been intersected over 1.2 kilometres along strike. There appears to be high grade zones interspersed with lower grade areas, however, the anomalous gold > 0.1g/t is continuous along strike confirming the high prospectivity the Illara shear zone.

In addition, high gold and silver grades in 19RVRC008 were accompanied by anomalous base metals mineralisation, which indicates a potential volcanic massive sulphide (VMS) signature north of Creasy 1 at the newly named Harmonic prospect.

Gold mineralisation is open in all directions at Creasy 1 and Harmonic. Both prospects will be subject to further RC drilling in order to better define and expand the mineralisation.

"The geology team now have substantial gold intersections to build on for follow up RC drilling campaigns in 2020 around Creasy 1, Harmonic and further along the 20km prospective gold strike to Creasy 2 and 3. Overall, the key takeaway from the inaugural drilling campaign is the Rover Project’s now demonstrable gold and VMS potential with significant exploration upside moving forward.”

Future drill testing will aim for better definition around high grade zones, down dip and along strike. Moreover, some of the more significant drill-holes are shown in cross sections A, B and C. 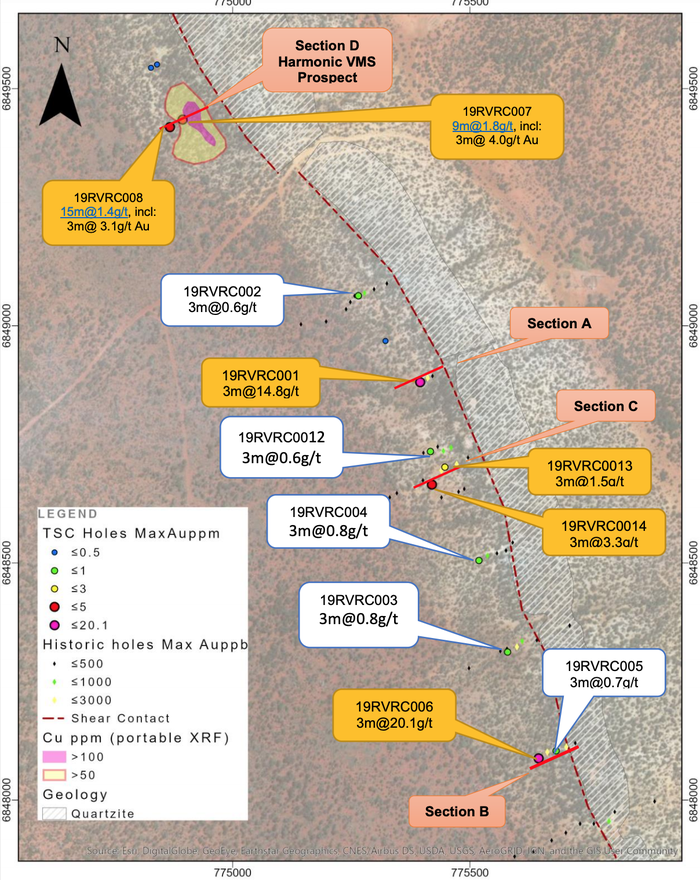 Following the completion of this campaign, TSC now has a full agenda moving into 2020, which include awaiting assays for the RC drilling completed at Creasy 2 to test the 200m long zinc-lead anomaly in soils / rock-chips within a broader copper-gold soil anomaly.