The Maniry Project is one of two of BEM’s 100%-owned Madagascan graphite projects, the other being the Ianapera Project in the country’s north. Maniry is highly prospective for large-scale, high-quality graphite deposits and is currently at an advanced evaluation stage. The Razafy indicated and inferred resource, comprising of 11.2Mt at 7.10% Total Graphitic Carbon (TGC).

Results, from recent diamond drilling have confirmed that the Razafy Prospect consists of high grade, thick outcropping graphitic mineralisation contained within distinct lenses which remain not only open along strike but also at depth.

Recent identification of further lenses to the east also highlights the prospectivity of the immediate area which, based on mapping and previous exploration represents only 5% of the current Maniry Project area.

A diamond core drill program was conducted in early 2018 to generate samples for metallurgical testwork. From these drill programs, sampling and compositing was undertaken to generate representative samples to assess the ore's amenability to beneficiation by froth flotation, and also to identify the nature, flake size and occurrence of the graphite in a selection of drill core samples and flotation products.

The bulk composite sample was sent to ALS Laboratory in Perth in late August 2018 with the metallurgical testwork program managed by BatteryLimits. The results, shown below, reaffirm the company’s earlier positive preliminary results announced on 16 October 2018. 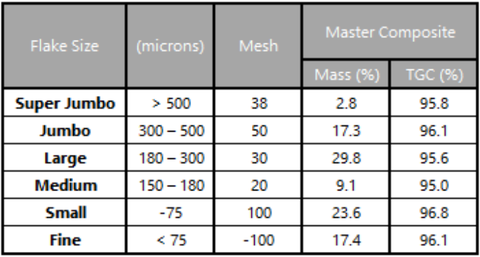 A total graphitic carbon (TGC) grade of >95% TGC was obtained across the full concentrate particle (flake) size distribution and is free of deleterious materials.

Notably, 50% of the graphite concentrate is represented by a flake size over 180μm, which should enable the product to be sold into premium market segments attracting higher prices, while 20% of the product falls within the Jumbo / Super Jumbo range (>300μm).

These results will be used to finalise the Maniry Graphite Project’s process flow sheet and current Scoping Study, ahead of the commencement of the bankable feasibility study which is due to commence in Q1 2019.

Further samples are now being planned to allow additional testwork for downstream testwork including purification and expandability testwork; thickener tests on concentrates and tails; filtration on concentrates; tailings for Geochemistry and Geotech.

Managing Director, Tom Revy commented: “The quality and consistency in these results further strengthens the Board’s decision to commence the feasibility study in early 2019. I look forward to providing further detail on the Maniry Graphite Project in line with our expected release on Scoping Study outcomes, shortly.”