TechGen Metals Limited (ASX:TG1) couldn’t have wished for a better start when it commenced trading on the ASX on Tuesday with its shares closing at 29 cents, implying a premium of 45% to the IPO price of 20 cents per share.

As well as opening strongly, the group’s shares settled around the 28 cents mark and traded as high as 29.5 cents today.

Some of today’s momentum appeared to stem from an announcement regarding the commencement of its Heliborne Versatile Time Domain Electro Magnetic (VTEMTM Max) geophysical survey at the highly prospective 100% owned Blue Rock Valley Project in the Ashburton Basin of Western Australia.

Management was attracted to the Blue Rock Valley Project by a combination of factors including the presence of major fault structures (Talga Fault and others), the existence of historic copper and base metal workings, high grade historic copper rock chip samples and an overall lack of modern exploration in the area.

It is worth noting that 85% of the Blue Rock Valley Project area has not had any previous airborne electromagnetic coverage.

The Talga Fault can be seen below, running diagonally through TG1’s tenements (E08/3030 and E08/3276), and the accompanying references to rock chips grading about 16% copper can be seen around the southern extent of E08/3030. 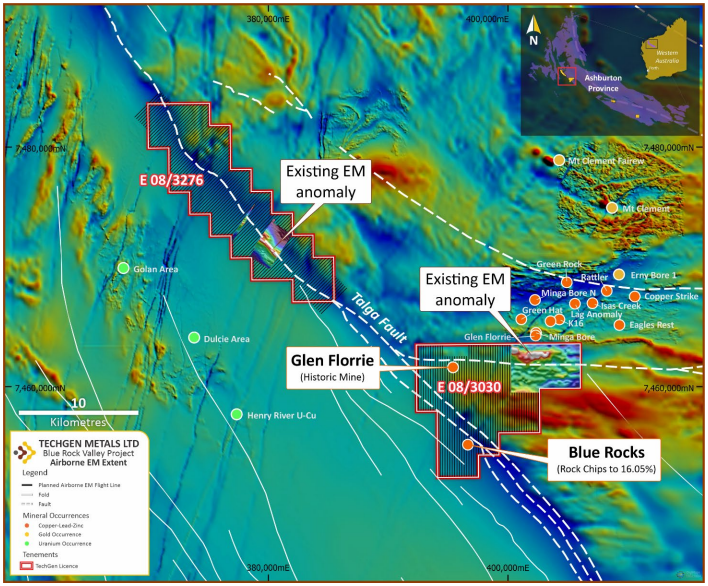 VTEM a step-change in surveying

Prior to the commencement of the current survey, results from a historic but limited VTEM survey over approximately 15% of the Blue Rock Valley Project area identified two moderate to strong electromagnetic (EM) conductors.

These two historic VTEM anomalies were identified within the mid to late time channels.

The north-eastern EM anomaly is ideally located immediately south of known copper-lead-zinc workings and the anomaly lies coincidently on a prominent magnetic high and an east-west fault.

Commenting on the upcoming surveying program, managing director Ashley Hood said, “Since the company’s recent ASX listing, our technical team has hit the ground running on a number of fronts.

"At the Ashburton group of projects, the objective of the VTEM surveys is to generate quality discrete mid to late time bedrock conductors prospective for copper-gold and/or base metal style mineralisation comparable to that seen in the Cobar Basin in NSW.

"We are encouraged by the results of limited historic VTEM surveys given that areas of historic copper workings and major faults are yet to be tested”.