Finfeed reported a fortnight ago that zinc polymetallic explorer and developer Adriatic Metals (ASX:ADT) had received promising results from metallurgical test work on samples from its Rupice and Veovača deposits.

Analysts at Hartleys noted that the results were either in line with their expectations, or in the case of precious metals, exceeded the assumptions they had modelled.

The deposits are part of Adriatic’s Vareš Project that is close to the mining town of Vareš in Bosnia and Herzegovina.

The project comprises a historic open cut zinc/lead/barite and silver mine at Veovača and Rupice — an advanced proximal deposit which exhibits exceptionally high grades of base and precious metals.

The objective of the test work programs was to establish basic processing data, to test processing options and to develop and test a flowsheet that would demonstrate that a marketable concentrate could be developed from each deposit. 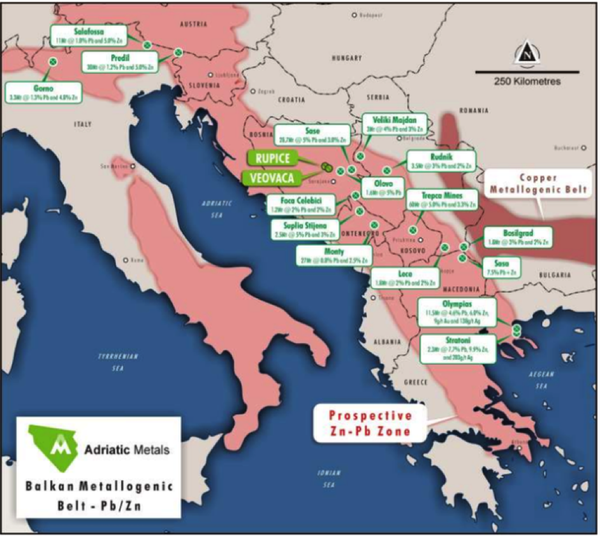 Hartleys resource analyst Paul Howard was impressed with the recoveries achieved, saying, ‘’ Preliminary metallurgical test work results from Adriatic Metals PLC’s (ADT) Vareš Project have demonstrated that 82% of zinc metal and 68% of gold can be recovered to concentrates at the Rupice deposit; as well as lead (90%), copper (83%), silver (93%) and barite (72%).

‘’The results also demonstrate that 91% of the zinc metal at Veovača can be recovered along with lead (82%) and barite (71%).

‘’The lock cycle testing has met our expectations and exceeded what was anticipated for precious metal recoveries in our model assumptions, particularly for silver.

‘’Adriatic has highlighted that the test work is preliminary in nature and expects to optimise these results ahead of a Scoping Study, which is due before years’ end.’’

While zinc is the main game, above expectations precious metal recoveries is certainly good news with gold (green line) and silver (black line) both up about 25% on a year-on-year basis with gold holding around the US$1500 per ounce mark . 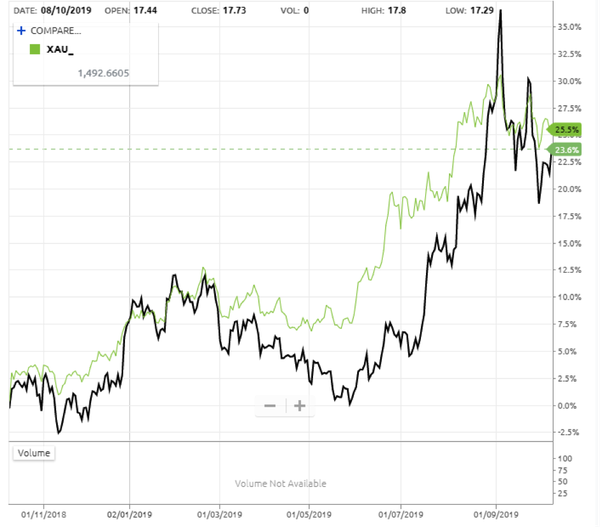 Having run the ruler across the numbers and taken into account the release of initial mining studies by December, Howard increased his price target to $1.50, representing a 50% premium to the company’s closing price on Wednesday.

Barite could be a bonus

While the company has reported excellent recovery of precious metals and copper at Rupice with further metallurgical optimisation test-work underway, the imminent release of a scoping study could be an even more significant share price catalyst.

The expected payability adjusted recoveries from all concentrates for Rupice are:

All Rupice concentrates exceed current specifications at a range of European and Chinese smelters, and in the case of barite, exceeding the API specification.

Howard also noted that barite was of a very high quality, but further work was required to ascertain what contribution it could make as a commercially viable commodity.