Shares in Adriatic Metals PLC (ASX:ADT & FSE:3FN) were up approximately 8% on Thursday morning as the market continued to absorb this week’s release of a maiden Mineral Resource Estimate for the group’s Rupice deposit, as well as an updated Mineral Resource Estimate for the Veovača deposit, both of which are located close to the mining town of Vareš in Bosnia and Herzegovina.

As a backdrop, the project comprises a historic open cut zinc-lead-barite-silver mine at Veovača and Rupice, an advanced proximal deposit which exhibits exceptionally high grades of base and precious metals.

Adriatic’s short-term aim is to expand the current JORC resource at Veovača and to complete in-fill and expansion drilling programme at the high-grade Rupice deposit.

Drilling at Veovača has added gold and silver into the entirety of the Mineral Resource Estimate and increased the Indicated Resource category to 71%.

The Veovača Mineral Resource begins at surface and currently extends to depths of 200 metres.

Management highlighted that the Rupice deposit is world-class and that a significant resource of precious metals exist within the confirmed base metals resource.

Consequently, further exploration will be undertaken to expand known mineralisation, and recent drilling suggests that high-grade mineralisation continues to the north.

Indeed, the numerous lead-zinc deposits that surround Rupice and Veovača suggest that there is a high probability of delineating further mineralisation.

The following map shows that the deposits are located in the prolific Balkan Metallogenic Belt, well known for hosting quality lead-zinc deposits. 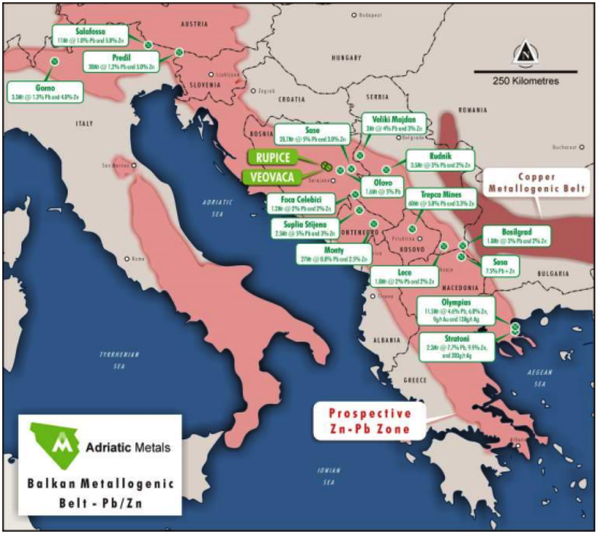 Notwithstanding the upside that further drilling could offer, the company now has a substantial resource inventory thatcanbe used in initial scoping studies.

Howard sees the prospect as having significant upside from conducting further exploration. He said, ‘’Rupice extends to 300 metres depth and remains open down plunge.

‘’Further drilling is planned to test for repetitions of the mineralisation, and will be guided by the recent IP survey, which will soon be completed across the whole project.

‘’While we have been modelling a hypothetical underground operation for Rupice, given the higher tonnage, ADT appears to be weighing up an open pit scenario as per preliminary optimisations mentioned in the resource announcement.’’

In response to these developments, Howard maintained his speculative buy recommendation - note this and any broker recommendations are speculative - and slightly increased his price target to $1.46, representing upside of more than 30% to the company’s recent trading range.