Hartleys resource analyst John Macdonald has initiated coverage of Navarre Minerals (ASX:NML) with a speculative buy recommendation and a 12 month share price target of 15 cents, representing a 50% premium to the company’s share price.

This would build on an already strong share price performance by the company which has surged nearly 100% in the last six months.

The company hit a six-year high in October on the back of impressive exploration results, but there could be more to come, and Macdonald believes this will happen sooner rather than later.

He has a high opinion of the company, particularly in terms of his belief that there is a strong likelihood of imminent exploration success in saying, “Navarre holds our attention because we feel the company is one or two good holes away from a major discovery in the Stawell Corridor.

‘’The share price has appreciated, partly due to recognition that mineral exploration in Victoria is yielding phenomenal returns at Fosterville (Kirkland Lake) and Thursday’s Gossan (Stavely Minerals).

‘’Navarre has the management and portfolio to continue to provide this sectoral exposure.’’

Expanding on the exploration theme, Macdonald pointed out that since 2014 Navarre’s geologists have been piecing together the case for potential repeats of the 4 million ounce Magdala gold system, in 60 kilometres of strike to the south of Magdala (Stawell).

The following graphic shows the area Macdonald is referring to and three of Navarre’s gold discoveries to date. 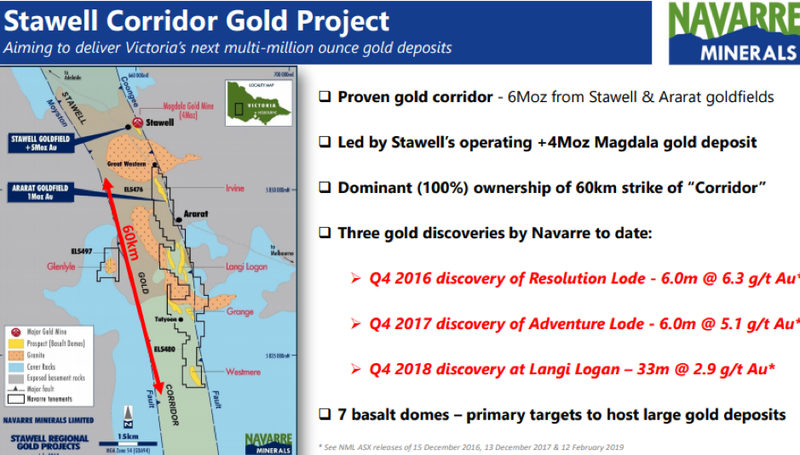 The anomalous zone remains open to the north, south and at depth.

Macdonald noted that in the next the next 6 to 9 months Navarre plans to test the size, continuity and tenor of gold mineralisation outlined near surface at two Irvine prospects (Resolution and Adventure lodes), down to about 300 metres depth from surface.

At the same time similar targets at Langi Logan will be matured with aircore drilling.

The combined prospective contact under historic alluvial/deep lead workings at Irvine and Langi Logan is about 42 kilometres.

Having discussed management’s approach to potential development, Macdonald said that the company is searching for ore systems in the Stawell Corridor that will justify stand-alone development.

He believes a low capex (capital expenditure) start-up may also eventuate if necessary, and if access to the third party, 1 million tonnes per annum plant operating within 40 kilometres of the prospects, is negotiated.

Other irons in the fire

Assays up to 131 g/t gold have been returned from recent drill programs covering a 1.1 kilometre strike length.

With drilling to follow up a successful six diamond hole program due to start in December 2019, this represents another opportunity for Navarre to benefit from its aggressive exploration campaign.

Macdonald noted that Navarre was well funded to finance upcoming exploration, being debt free with $10 million in cash.