The past twelve months has been a transformational period for Andromeda Metals (ASX:ADN).

However, despite the company meeting numerous important milestones over this period, it has taken some time for investors to warm to the stock.

This can mainly be attributed to the unique nature of the company’s resource, its comprehensive applications and arguably the difficulty in making the same sort of peer comparisons that can be applied across most other base, precious and hard rock metals.

If analysts were examining a blue-chip stock with a resource, a device or a service that couldn’t be replicated, nor was there any prospect of material near-term competition, they would be attributing premium valuations to the company.

References such as monopoly position, world leader, unique player in a niche market would be readily applied.

However, despite being the only company in the world capable of producing its premium halloysite product, Andromeda has flown under the radar - until now!

In less than three months, Andromeda’s shares have increased roughly 500%, and with the company now grabbing the attention of some of the world’s largest manufacturers, it is more a case of trying to determine how high it will fly rather than where it is likely to plateau out.

The numerous applications of its rare and high quality materials are now coming to the forefront, and there is an uncanny resemblance between the 80 year chart of publications and patents relating to halloysite and Andromeda’s 2019 share price performance over a period of approximately eight months.

The first chart below highlights the increasing application of halloysite and the second shows the stunning six-fold increase in Andromeda’s share price. 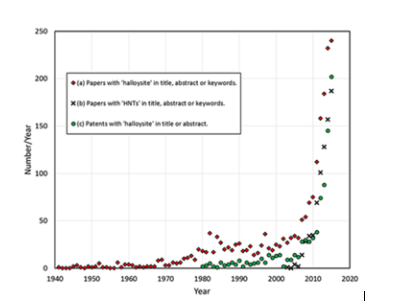 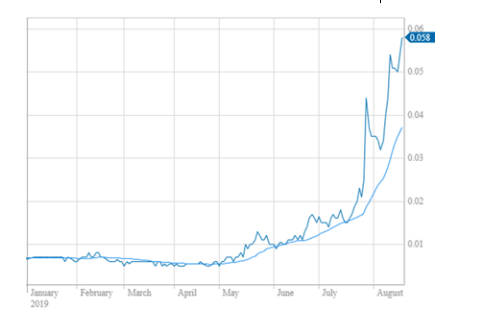 Rather than just being a novel way of illustrating the outstanding increases on both counts, this serves to indicate the increasing understanding and likely uptick in demand for Andromeda’s premium product.

More recently, it has been the deal flow that has confirmed a sharp increase in interest and this is likely to provide a platform for further share price momentum based on the value attributed to the project, as well as the potential for offtake agreements to transition into funding arrangements that could substantially de-risk the project.

Before fleshing out the material agreements that have been entered into with major manufacturers, it is worth taking a quick look at the progress leading up to these developments.

In April 2018, management announced the signing of a binding Joint Venture Heads of Agreement (HOA) with Minotaur Exploration Ltd (ASX:MEP) to acquire up to a 75% interest in its world class HPA Poochera Halloysite-Kaolin Project in South Australia.

As indicated below in green, there are two key deposits central to the joint venture and we will go on to explain how they fit into Andromeda’s overall strategy.

In order to take its stake to 75%, Andromeda needs to spend $6 million over a period of up to 5 years. 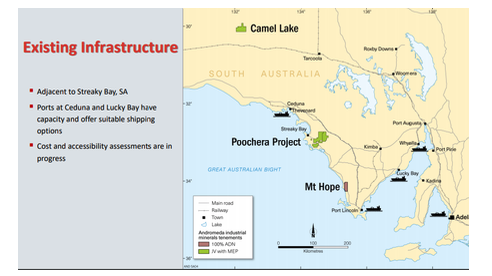 The best way to get a feel for Andromeda is to understand the size and type of its resource, the commodity’s applications and end markets and the supply/demand equation.

Getting to know the resource

Poochera contains a high-quality kaolin (+halloysite) Mineral Resource, which demonstrates the potential to be a valuable feedstock to the high purity alumina (HPA) sector.

However, aside from that halloysite kaolin is a high value industrial mineral that is growing in demand whilst global supplies are reducing.

In terms of supply, Chinese production of the hybrid product (equivalent to Carey’s Well) has dried up or been shut down by government environmental teams.

This has caused the huge surge in demand from China where multinational manufacturers are desperate to readily source this material in large amounts.

The Chinese regard Australia as a reliable supplier of consistent, high-quality minerals, which puts Andromeda into a strong bargaining position.

In discussions with Andromeda’s managing director James Marsh he further emphasised the group’s dominant position in saying, ‘’One key fact for us is that for various reasons there is now not one company in the world capable of producing the right sort of halloysite for commercial applications.’’

Andromeda has numerous relatively short-term opportunities with customers who have already given technical approval for the Poochera material in addition to supplying materials for some exciting new high-tech applications for high purity alumina production and halloysite nanotubes from its long life mines.

Pure halloysite fetches more than US$3,000 per tonne

With regard to its various applications, it is important to gain an appreciation of the prices paid for various forms of this material as it will assist in attributing a valuation to the group while also underlining the level of demand that drives premium prices for the rare halloysite commodity.

The following shows just a few of the applications of halloysite kaolin, as well as outlining indicative relative commercial values. 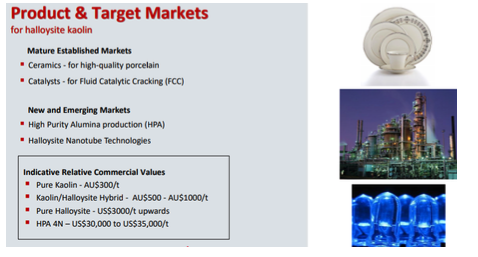 Because there is a mix of mature and established markets and new and emerging demand drivers, there are near, medium and long-term drivers at a revenue level which potentially provide early stage cash flow to assist in developing a full-scale project, while also offering investors blue sky appeal.

Some of the emerging applications are interesting from a number of perspectives.

Firstly, they demonstrate the high demand/high-volume nature of the products and industries that Andromeda could be selling into.

It is also worth noting that some of the applications outlined below are well-known to investors who have targeted miners with battery metals and biotechnology companies that are increasingly turning to nanomaterials for new forms of drug delivery.

The following graphic provides an understanding of how this is likely to fit into management’s mine development strategy, again reinforcing the group’s commitment to generating early cash flow from direct shipping ore, followed by distribution of a higher value fully processed mineral in the medium term and then moving to the premium US$35,000 per tonne HPA feedstock and nanotechnology type material.

Andromeda has already made significant headway in terms of working with likely end users in countries such as China, India and Japan.

Given a number of major manufacturers have had the opportunity to test the product ahead of entering into purchasing agreements, there is ample evidence to support both the quality of the product and the sizeable demand.

Management has been quick to establish a JORC Mineral Resource estimate at its Carey’s Well deposit in South Australia.

The resource for the halloysite content of 9.7 million tonnes will yield 5.3 million tonnes of bright white kaolin product with an average grade of 18.4% when applying recovery factors.

Further drilling at Carey’s Well has extended the mineralised zone, and management expects to update the resource towards the end of year.

While this is likely to spark further investor interest, there are other catalysts on the horizon that point to further share price upside, one of those being a scoping study which is due to be released towards the end of September.

Management expects to move quickly to the feasibility study given the straightforward nature of the project and the area in which it is located.

With completion due by the end of 2019, Andromeda is shaping up as a news driven story simply based on meeting the milestones required to bring the project into production.

As recently as this week, Andromeda announced the securing of direct shipping ore (DSO) Letters of Intent from potential customers which would account for 405,000 tonnes per annum of halloysite-kaolin product.

This included the negotiation of a 200,000 tonnes per annum LOI with Lonhyan Kaolin China, a world leader in specialty halloysite-kaolin minerals for the ceramics industry.

This comes on the back of LOI’s accounting for more than 500,000 tonnes per annum that were negotiated in June 2018 and July 2019, confirming strong and growing market demand for all three products forms that could be produced from the Carey’s Well range of materials.

The negotiation of offtake agreements can have a significant share price impact, and this week’s news triggered a 16% spike.

With numerous share price catalysts in the wind Andromeda is one to put on the watchlist.