GTR to complete gold drilling before Christmas: assays due in February

This RC drilling campaign is targeting completion of 16 drill holes at an average depth of 150 metres per hole for a total of approximately 2400 metres of drilling.

Targeting of the RC drill holes is based on GTR’s successful September drilling of 52 shallow aircore holes (average depth 49 metres) over the eastern part of the Niagara Gold Project as shown below.

Assay results for gold and a further 48 elements were previously reported in October and November with results including elevated gold values and anomalism of up to 2.8 g/t gold.

The multi-element results, together with previous gold assay results, have contributed to the development of the overall exploration model with refined targets now to be tested by the RC drilling campaign.

As a backdrop, the project is located within the central part of the Norseman-Wiluna greenstone belt and the geology of the area is characterised by large rafts of semi-continuous greenstone stratigraphy within the Mendleyarri monzogranite batholith.

Numerous historical workings occur within and to the north of the project area, with a number of major historical mines located in the immediate vicinity of Kookynie, including the Cosmopolitan mine that produced a total of around 630,000 tonnes of ore at an average grade of 15 g/t gold between 1897 and 1911.

However the majority of the landholding that makes up the Niagara gold project is untested leaving GTR significant scope to test new targets. 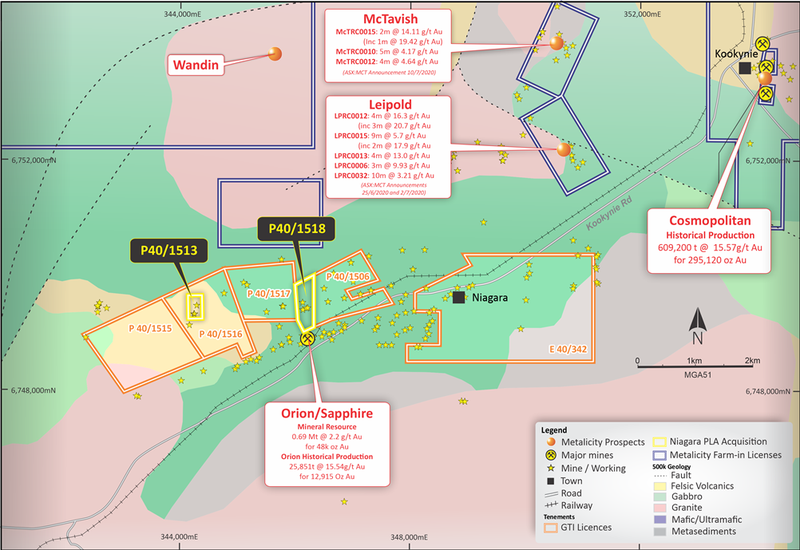 Based on the results of the geochemical assessment completed to date, the project area is hosted by mafic intrusions, volcanic rocks and volcaniclastics with minor felsic meta-sediments and intrusive rocks.

The south-eastern part of the tenement is dominated by mafic meta-sedimentary successions.

Evaluation and interpretation of geochemical element associations suggest gold is potentially related to anomalous levels of bismuth, tungsten, and tellurium.

The multi-element geochemistry has been used to assist in refining the exploration model and vectoring towards alteration and mineralisation targets being tested by the current RC drilling campaign.

The drilling is expected to be completed by 24 December with assay results expected during February 2021.