GTi Resources Ltd (ASX:GTR) has completed the down hole gamma logging of historical drill holes at the Jeffrey uranium/vanadium project in Utah.

A total of 26 open historical drill holes were available for logging, with data generated to calculate eU3O8 assay values.

Results from this week’s logging program are expected to be available for release within the next 14 days.

It is good timing. In the month of April, the spot uranium price rose almost 24% to mark the largest monthly increase in almost thirty years. In six weeks, the spot price has risen 41%, being the fastest rise since 2007.

Leading up to these developments, GTR confirmed the presence of high-grade uranium and vanadium potential at the Jeffrey project in Utah, and this logging program has been completed to leverage existing shallow drill holes dating from the 1970s to generate low-cost, high-value assay data.

The in-situ assay data will be utilised to refine knowledge of the local mineralisation as the trend moves away from outcrop and shallow underground exposure, as well as guide refinement of drill targets for the planned follow-up drilling campaign.

The planned drilling program due to commence in early July is expected to involve several drill holes with a depth of approximately 20 metres.

In addition to the down hole logging work and the upcoming drill campaign on the Jeffrey project, the company is currently conducting sampling and mapping work on the underground workings at the nearby prospective Rat Nest project, to the north-west of the White Mesa Mill location as indicated below. 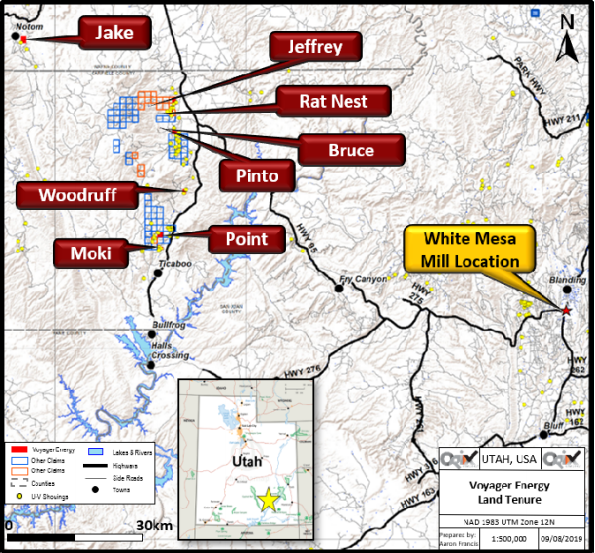 Results from this work will be available in the coming weeks.

The Jeffrey Project is one of several projects the company holds in Utah covering approximately 1,500 hectares of the Henry Mountains region, within Garfield and Wayne Counties near Hanksville, Utah.

The White Mesa mill is the only conventional fully licensed and operational uranium/vanadium combination mill in the US, and as indicated above it is located within trucking distance of the properties.

The mill is owned and operated by Energy Fuels and is set up to process the sandstone hosted uranium and vanadium rich ores that have been mined in the region for many decades.

Management said that it is also actively looking for value accretive opportunities to expand its US project portfolio in this space.

GTR is positioning itself as an emerging producer at a time when the US government is unveiling a 10-year plan which would see it invest approximately US$150 million per annum in purchasing domestically produced uranium.

The Trump administration recently unveiled its vision for reclaiming US nuclear leadership.

The 2021 budget proposes creating a US$1.5 billion U3O8 reserve through 10 years of purchasing US$150 million per annum (approximately 3.75 million pounds per annum) of domestic U3O8 production.

Further congressional approval will be sought to expand this initiative to acquire 17 to 19 million pounds of U3O8 over 10 years.

This would represent a significant uptick in demand given that 2019 US production was estimated at only 174,000 pounds

The move has seen strong industry support from US producers, who are very encouraged by a sustained improvement in the U3O8 spot price and the recently announced significant US government support.

GTR is highly supportive of the recently released US Department of Energy report and the industry support measures proposed under the Trump regime.

On this note, GTi Resources Director Bruce Lane said, “We hope the company’s high-grade potential and proximity to operating infrastructure will strengthen the possibility for an early stage production outcome under the supportive Trump regime.

‘’I look forward to providing shareholders with a consistent flow of news on the project’s development, despite the challenging COVID 19 environment, with downhole data, further assays and drill interpretation leading to a highly prospective drill campaign in early July.”