After delivering a ten-fold share price gain between March and May, GTI Resources Ltd (ASX:GTR) has revealed that the group has another string to its bow.

While the company’s uranium operations in Utah have been central to the strong run in the group’s share price to date, the upcoming exploration program at GTR’s Niagara (Kookynie) Gold Project in the central goldfields of Western Australia has the potential to be another share price catalyst.

This is particularly the case given the gold price is approaching an all-time high, and it wasn’t surprising to see GTR’s share price climb 10% this morning when management announced the commencement of airborne magnetic surveying at Niagara.

This follows up on successful soil sampling at the project earlier in the year where several significant gold in soil anomalies were identified within exploration licence E 40/342.

As shown below (green dots) these included a strong 500 metre long and 100 metre wide anomaly above 10 ppb gold contour up to a peak of 38 ppb gold in the north‐eastern corner of the licence. 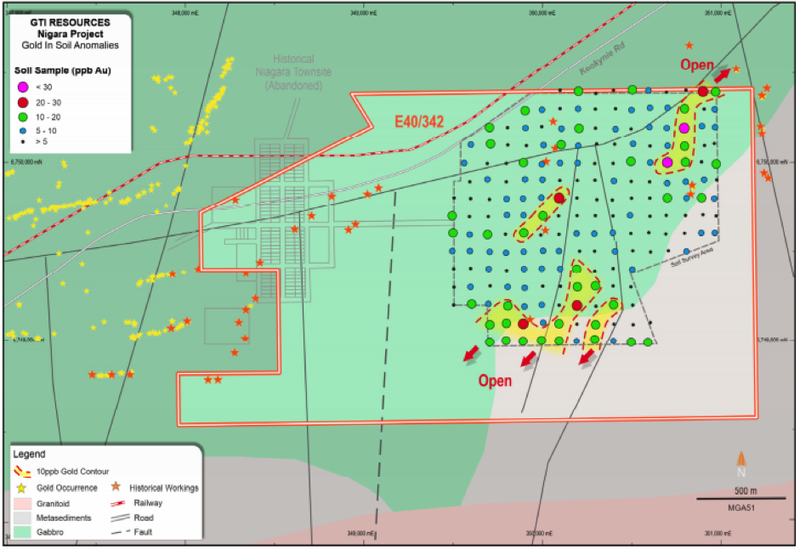 Exploration success at nearby prospects

Providing an added incentive for GTI Resources to fast track exploration is the success that other players such as Metalicity Ltd (ASX:MCT) and Nex Metals Exploration Ltd (ASX:NME) have had at the nearby Leipold and McTavish prospects.

These lie just two to four kilometres to the north of the Niagara project, demonstrating the exciting potential of the region which has delivered prominent discoveries within the Norseman-Wiluna Greenstone belt.

GTR noted that the market capitalisations of Metalicity and Nex were $40 million and $95 million respectively, suggesting the group’s $16 million market cap doesn’t even capture the value of its uranium project, indicating zero value is being attributed to Niagara.

However, it would only take one round of positive exploration results to change that scenario, and a market cap-based share price rerating could be in the wind.

As a guide to what could lie ahead, Metalicity’s first round of assay results at its Leipold prospect (see below), part of the Kookynie Gold Project included numerous hits of high-grade mineralisation at depths between 10 metres and 50 metres. 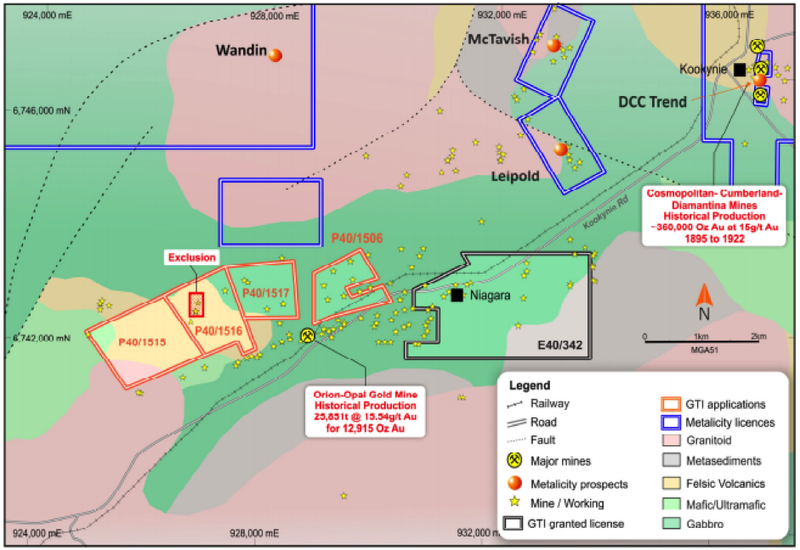 Since these results were released, the company’s shares have more than doubled.

Importantly, drilling is set to recommence at the project and it is highly likely that further success could rub off on GTI Resources before it commences drilling.

Highlighting the importance of these recent developments and outlining GTR’s strategy, executive director Bruce Lane said, ‘’Metalicity’s spectacular success in close proximity to our Niagara project encouraged GTR to accelerate our next phase of gold exploration and drill targeting at Niagara.

‘’Timing of the program fits perfectly from an execution planning point of view with the exploration preparation work being undertaken at GTR’s Utah projects.

‘’The company hopes to identify analogous structures to those being successfully drilled immediately to the north.’’

High-grade Cosmopolitan Mine in close proximity

Interestingly, GTR has held the lease at Niagara in anticipation of the optimum conditions occurring before investing in further work on the project, and management believes that time is right to accelerate exploration.

The Niagara project is located approximately six kilometres south-west of Kookynie and the project comprises one granted exploration licence (E40/342) and four prospecting licences which were recently pegged and applied for.

Numerous historical workings occur within and to the north of the project area with a number of major historical mines located in the immediate vicinity of Kookynie, including the Cosmopolitan Mine which produced approximately 360,000 ounces of gold at an average grade of 15 g/t from 1895 to 1922.