In a highly promising development for GTI Resources Ltd (ASX:GTR) management has informed the market that the company’s recently acquired historical exploration data package has confirmed the mineralised trend along the Jeffrey Project’s expanded contiguous tract covering 5.5 kilometres along the interpreted strike.

The acquired historical data package contains data for over 750 drill holes, representing a replication value at present‐day cost in excess of $10 million.

As illustrated below, this information has assisted management in confirming there are 362 drill holes located within the boundaries of the now expanded Jeffrey and Rats Nest project area, which includes data from 135 drill holes that intersected uranium mineralisation. 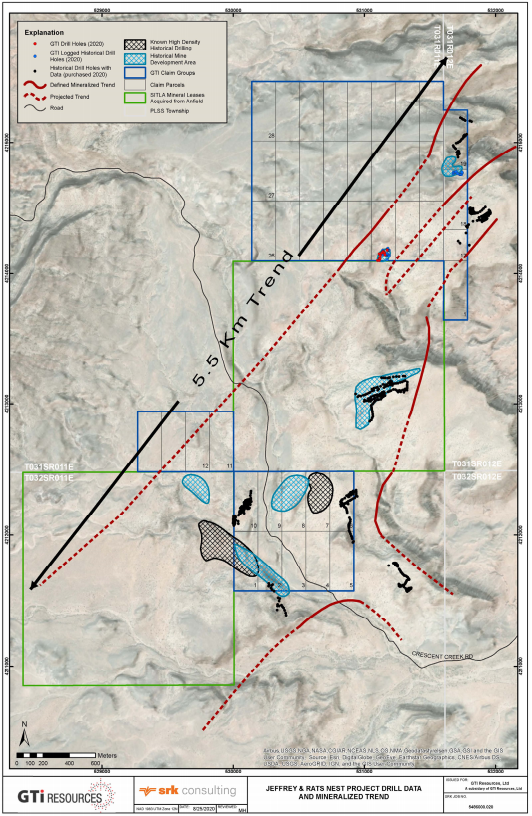 At the Moki Project, the company now has data from 107 drill holes within the project area, including 42 drill holes that intersected uranium mineralisation.

This data is of particular interest due to the property’s position immediately east of the Tony M Mine owned by Energy Fuels Inc. which as shown below may indicate an extension of that mineralised trend that requires further exploration.

Much of the acquired historical data is summary level drill intercept maps and tables based on downhole gamma logging at the time of drilling.

As presented within the summary maps, the grade and thickness provide an excellent indication as to the location and nature of mineralisation across certain areas of the expanded Jeffrey/Rats Nest Project area, and the Moki Project.

GTR’s foray into northern America comes at a crucial time when the US is looking to ramp up its uranium production and nuclear power capabilities.

Just last week Reuters revealed a new campaign by the Bill Gates-controlled TerraPower LLC (Gates founded the group 14 years ago) to build commercial advanced nuclear energy plants called "Natrium" in the US later in the decade.

According to Reuters,‘’The project will focus on the Pacific Northwest, where Gates has won the backing of three major utilities in the region, including Berkshire Hathaway-owned PacifiCorp.

This initiative is part of Gates’ strategy to assist in fighting climate change, and he is targeting a technology that will lead to a significant decrease in planet-warming gases while maintaining grid reliability.’’

While the historical data won’t directly assist GTR in its mineral resource estimate, it has revealed several new exploration targets that once drilled could yield the data required to provide a resource boost.

Not only does this information have the potential to increase the economic viability of the venture, but it will also provide management with an improved understanding of the broader geological area, allowing it to frame a more focused and accurate exploration program.

Indeed, the completed data review, digitisation, and ground‐truthing of the acquired historical data has further reinforced and confirmed GTR’s initial interpretations of the expanded Jeffrey/Rats Nest Project area, as well as validating the prospectivity of other land held by the company within the Henry Mountains uranium district.

GTR has continuously generated high‐quality, low‐cost data to rapidly advance the expanded Jeffrey and Rats Nest project area over the past six months.

The company has recently completed underground mapping and sampling within the mineral leases being acquired from Anfield to support the ongoing targeting work for the next stage of exploration.

Commenting on the informative nature of the data acquired and the extremely economical means of gathering vital details regarding the area that will assist in future exploration, GTR executive director Bruce Lane said, “Analysis of the historical data package delivered a wealth of very high-value information to GTI.

‘’The 750 drill holes alone would cost over $10 million in today’s money and certainly take more than a year to replicate.

‘’We now have several new targets to consider and the data has significantly boosted our understanding of the projects and our planning of the next phase of exploration in Utah.

‘’The company’s ground position has been enhanced significantly by securing the prospective ground between our Jeffrey and Rats Nest projects and now the new data package has helped us to quickly and cost-effectively improve our understanding of the potential at the expanded Jeffrey project area.

‘’An additional bonus from analysing the data package was the discovery of over 100 drill holes at the Moki Project area.

‘’These holes have helped us in understanding the mineralisation potential of the Moki Project area which sits next to Energy Fuel’s Tony M Mine.”