GTI Resources prepares to drill at Niagara in December

The project is located within the central part of the Norseman‐Wiluna greenstone belt where numerous historical workings have been undertaken, including the Cosmopolitan mine which yielded 630,000 tonnes of ore at an average grade of 15 g/t gold.

The multi‐element results follow the previously announced gold assays from the aircore drilling program that intersected elevated gold values and anomalism of up to 2.8 g/t gold.

The multi-element results, together with the previous gold assay results have contributed to the development of the overall exploration model with refined targets now to be tested by reverse circulation drilling which should commence in December.

Presence of other metals points to gold mineralisation

In September, the company completed 2,553 metres (52 holes to an average depth 45 metres) of shallow aircore drilling over the eastern part of the Niagara Project.

A total of 670 samples taken from areas shown below were analysed for a further 48 elements. 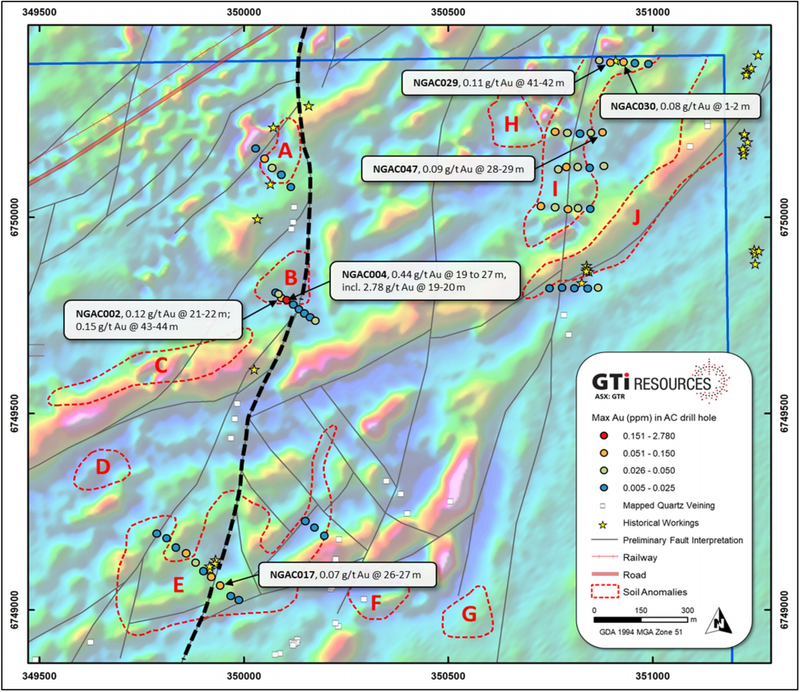 The samples were selected to reflect intervals of potential anomalism and alteration.

Based on the results of geochemical assessment the project area is deemed to be hosted by geological features and mineralisation that can indicate the presence of gold.

In particular, anomalous levels of bismuth, tungsten and tellurium are a positive sign for the group in terms of identifying gold mineralisation.

Consequently, the multi-element geochemistry has been used to assist in refining the exploration model and vectoring towards alteration and mineralised targets being tested by the RC drilling campaign planned for December.

The areas that lie within the Niagara Project are largely under-explored despite historical mining having identified high-grade mineralisation.

Consequently, the upcoming exploration program could be a defining moment for GTI.