GTI Resources Ltd (ASX:GTR) has advised that the first phase of its spring exploration field activity commences this week, following settlement of the acquisition and transfer of two State of Utah mineral leases from Anfield Energy Inc.

Exploration fieldwork will commence within the Section 36 historical mines, which is within GTR’s land position along a 5.5km mineralised trend.

These historical mines represent a robust development target with over 1,300m of historical underground workings.

Bruce Lane, Executive Director of GTR said, “We are excited to be commencing our spring field program in Utah and to further explore the potential in the district for mine redevelopment and production of high‐ grade uranium and vanadium. We look forward to provide more details and results as work progresses.”

Located in the Henry Mountains district of south-central Utah, USA, exploration activities during Q4 of 2020 were focused on a significant exploration and development target within the Section 26 Mineral Lease. 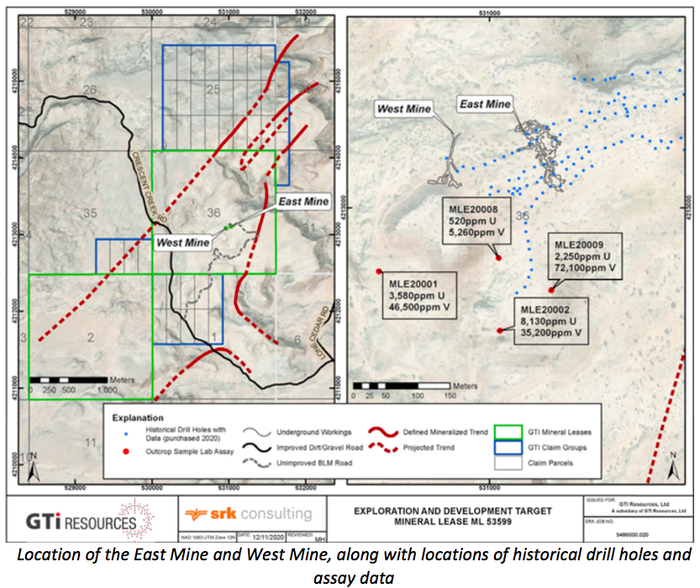 As we reported in late October 2020, the prospectivity of this area was previously demonstrated by pXRF data and sample assays.

Through this work program GTI has mapped over 1,300 metres of underground development and pXRF screening has provided results as high as 19.64% U3O8 and 6.08% V2O5.

GTR believes that this early‐stage exploration work is only beginning to show the prospectivity of the project, strongly validating the acquisition of the Leases as well as the overarching strategy to develop a uranium and vanadium project within the Henry Mountains uranium district.

The company will commence fieldwork this week and will leverage the existing underground developments to aid in rapid advancement of the project.

The team will also examine the underground mines to determine current conditions for underground drilling, map any exposed mineralisation, collect channel samples as appropriate and mark locations for follow up drilling.

The results of this program will allow for study of the controls and distribution of ore‐grade mineralised material, as well as generate data for construction of a possible mineral resource.

The initial phase of the field program is expected to be completed by April 28, 2021. Pending the results of the initial field program the timing of the follow up drilling program will be determined.