Shares in gold and base metals explorer, GTI Resources Ltd (ASX:GTR) have already surged 20% in 2019, but it could be argued that they are still shy of fair value.

Unjustified selling in November due to a downturn in broader equity markets rather than stock specific developments sees the company still trading at a sharp discount to the average trading range in the second half of 2018.

However, this may not be the case for much longer as the company embarks on a focused drilling campaign in the March quarter.

Management will be drawing on data gathered in the December quarter to target highly prospective mineralisation at the company’s Meekatharra VMS (volcanogenic massive sulphide) Project, 55 kilometres south of Meekatharra in the Eastern Goldfields of Western Australia.

During the December quarter GTI undertook reprocessing and interpretation of recently acquired airborne electromagnetic data at the Meekatharra Project.

Additional information covered a gap in the previous data, over prospective lithologies, along strike and to the north of the Austin VMS deposit.

Reprocessing and interpretation of the recently acquired data identified a shallow, weakly conductive feature overlying a deeper magnetic unit in the north-western part of the area, although no other deeper (less than 300 metres in depth) discrete bedrock conductors were apparent in the remaining data.

As illustrated on the following map, two new anomalies lie to the north-east and north-west of the Defiance prospect. 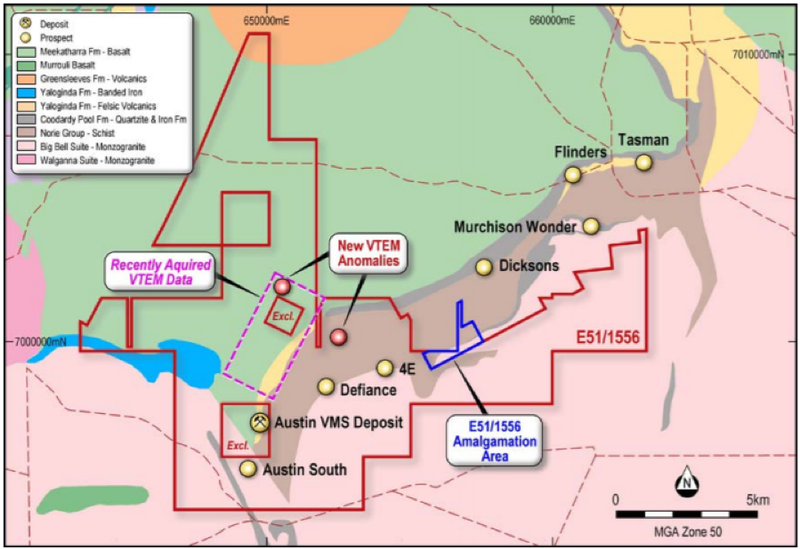 In the course of discussions with executive chairman, Murray McDonald he said, “These two prospects and the new anomalies identified from the reprocessed data will be the focus for the company’s on-ground exploration programs.”

Providing further potential upside is the recent increase in size of the E51/1556 licence area which was attained by amalgamating tenements previously covered by surrendered mining leases.

The newly incorporated tenure of 1.2 square kilometres covers magnetic basement along strike and to the east of the Defiance and 4E prospects.

McDonald also referred to ongoing discussions regarding other opportunities, with the outcomes to be conveyed after completing the preliminary stages of investigation.

Consequently, there could be dual catalysts on the horizon as drilling results from the targeted exploration programs come to hand, and there is the prospect of GTI being involved in another project.