While vanadium projects often possess very similar characteristics, it must be said that Golden Deeps Ltd’s (ASX:GED) Abenab Vanadium Project (AVP) in Namibia has many points of difference.

Having had the chance to discuss the project with managing director, Michael Minosora it was obvious that the unique characteristics of the mine when drawn together have the potential to support a highly lucrative operation that can generate early stage cash flow.

As a backdrop, Golden Deeps holds an 80% stake in the low-cost/high grade vanadium pentoxide-lead-zinc project that will be in production in early 2020.

Those attributes alone are extremely impressive and rare for a company with a market capitalisation of only $5 million.

From a geological perspective, the Abenab Trend is marked by a series of vanadium-lead-zinc occurrences located near the contact between the Auros Shale and Maieberg Dolomites.

The Abenab, Abenab West and Okurundu mines are located on this contact position and represent high priority vanadium targets.

Approximately 40 kilometres of strike extends across this highly prospective trend, highlighted below as EPL3543. 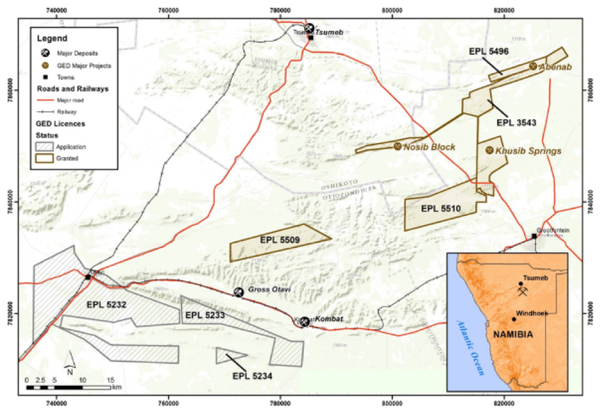 On its tenements and applications, Golden Deeps holds two of the five historically important mines in the broader province – Abenab and Abenab West (formerly Christiana).

Both mines have only been tested over short strike lengths, with significant exploration upside available to the company.

Given it is the unique geological formations that host the vanadium and underpin its ability to be upgraded at extremely low costs, it is encouraging to know that early stage exploration in various outlying areas of the established mineralisation are also known to possess the same host material.

It is that host material that is central to Golden Deeps’ prospect of becoming a near-term producer of low-cost/high grade vanadium and base metals.

However, it could be argued that one of the reasons why Golden Deeps flies under the radar is that the comprehensive geological factors that make the deposit unique and valuable are complex, resulting in the company being overlooked.

Consequently, after briefly discussing some of the basic geological features, I will look to break things down into layman’s terms in explaining the project, mainly focusing on the associated processing implications as these aren’t difficult to appreciate.

Why so cheap, why so good

The mineralisation style at Abenab is rare with the main mineral being descloizite, a lead-zinc vanadate.

Before we go any further, concentrate on the word ‘descloizite’ because amongst all of the other geological terminology it is Golden Deeps’ key to the vault.

The ore body is contained in a breccia pipe with the majority of vanadium minerals contained within a red clay.

The vanadium-lead-zinc minerals are descloizite and vanadinite that are hosted within quartz-carbonate breccia, red clay breccia and also quartz veins.

The mineralisation is situated on a long, narrow zone of deformation and associated bedding-parallel faulting.

Solution cavities in the fault breccia are filled by unconsolidated, ferruginous clay containing descloizite and galena in the upper levels.

In short, ‘minerals in red clay, solution cavities and unconsolidated surrounding materials’ tells the story - the vanadium minerals can easily be separated from the host material.

Minosora said there aren’t any other current or emerging vanadium deposit in the world that have the same style of mineralisation as that which makes Abenab’s vanadium so economical to mine.

Cheaper and easier to process than magnetite deposits

One of the most common pitfalls in the vanadium industry is the extensive capital required to build complex processing plants in order to separate vanadium and other metals that are firmly wedged in hard rock, most commonly magnetite.

Golden Deeps doesn’t need a processing plant worth hundreds of millions of dollars - Minosora expects that a $10 million plant will be producing vanadium and other base metals at Abenab in early 2020.

So simple is the process that management can bypass extensive feasibility and scoping studies, moving straight to a bankable feasibility study, decision to mine and plant construction over the next six months.

While they say, if it sounds too good to be true, it usually is, the following graphic clearly illustrates management’s anticipated extraction process, while also underlining comparisons with a vanadium in magnetite scenario. 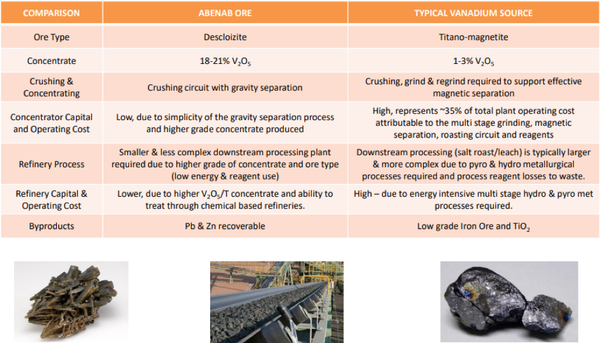 The most obvious difference is in the headline numbers with the processing of Abenab ore able to deliver vanadium pentoxide grades of between 18% and 21% as opposed to a mid-range of 2% for vanadium hosted in magnetite ore.

However, you can also see the differences in the way the ore needs to be processed and how this would impact upfront capital costs, as well as all in sustaining costs (AISCs).

Harking back to what we said about the relatively non-binding nature of Abenab’s host mineralisation, you can see that a key factor in simplifying processing is gravity separation - in other words, the vanadium and base metals virtually fall away.

There is limited need for crushing, nor is there a need to run multiple circuits to grind and regrind before even entering the magnetic separation phase, essential to magnetite hosted vanadium.

Even the refinery process is simpler and cheaper.

Minosora expects Abenab’s production costs to be at the bottom end of the bottom quartile of all vanadium producers. 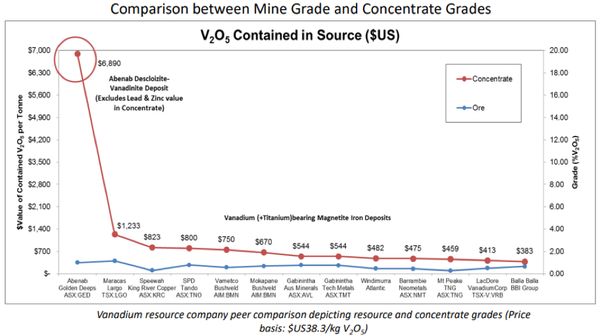 Another important factor in maximising the project’s economic viability will be the high-grade by-products that are expected to be recovered.

Minosora believes the company can deliver grades of 14% zinc and 53% lead.

Final bulk concentrate samples produced at 8.9% V2O5, 30.5% lead and 8.95% zinc from above ground stockpiles indicated the capability to achieve V2O5 grades of more than 19% from the main ore body, assuming a 30 times upgrade factor can be applied.

Commenting on this development, Minosora said, “Identifying that the above ground stockpiles as amenable to simple gravity separation result in a significantly upgraded (x30) concentrate is a huge milestone for the company.

‘’This has the potential to reduce the time to production for the Abenab Project by 12 months, generating early cash flow for the operations whilst the below ground mineral resource is developed.

“In addition, the company has been advised by the Namibian Ministry of Mines and Energy that the processing of the above ground stockpiles will not require a full mining licence and that a simplified plant scope works approval could be utilised.

‘’This has the benefit of reducing the approvals process and further reducing the development timeline to production.’’