Los Cerros Limited (ASX:LCL) announced on Monday morning that it had completed a capital raising via private placement to professional and sophisticated investors.

Funds will be used to advance the Quinchia Project in the heart of the prolific Mid-Cauca gold-copper porphyry belt of Colombia, which hosts several multi-million ounce gold and gold-copper deposits.

Diamond drilling is scheduled to commence in the last week of July via a service provider initially, prior to Los Cerros' taking receipt of its own diamond rig to accelerate further drilling.

This will provide the company with capacity to target deep-seated high-grade mineralisation which in the course of historical drilling has featured promising broad intersections of promising grades at depths of around 150 metres.

The initial 2,500 metre diamond drilling program will commence at the Tesorito porphyry before moving to targets at Chuscal and Miraflores.

After taking delivery of the company’s own rig, management intends to further step-up the scale of the drill program.

Importantly, Los Cerros has an established platform to build on with a JORC Resource of 877,000 ounces gold and reserves of 457,000 ounces gold at the Miraflores deposit, and it is targeting porphyry mineralisation at the nearby Tesorito and Chuscal prospects.

All seven previous holes drilled at Tesorito have successfully intersected porphyry-style gold mineralisation, including impressive intercepts of 384 metres and 253 metres as indicated below. 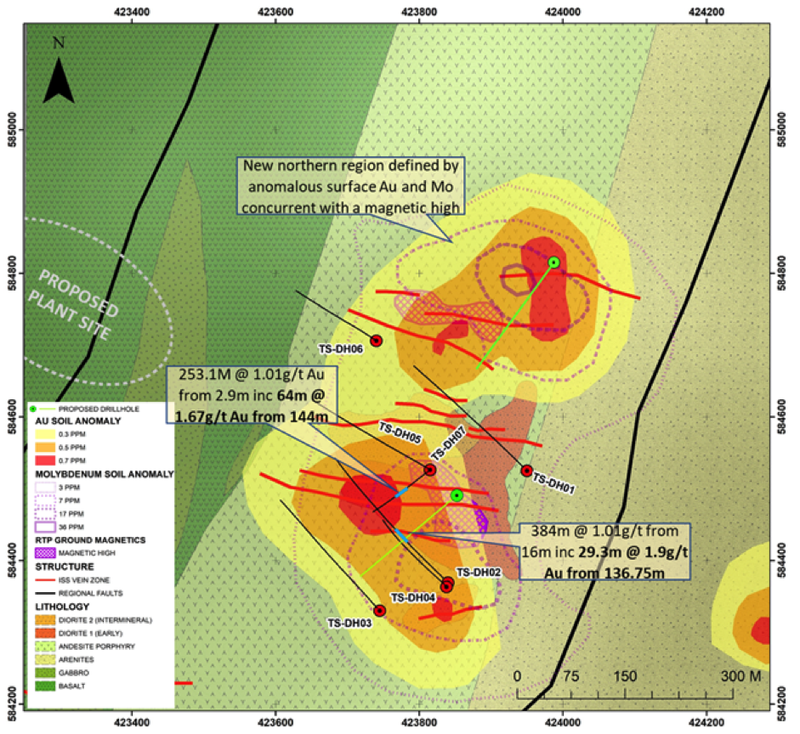 While equities markets are uncertain, from a commodity price perspective the upcoming drilling campaign is timed to perfection, and this no doubt underpinned robust support for the capital raising.

The gold price is approaching all-time highs, while the copper price is closing in on highs not seen since early 2019.

In a strong endorsement, the company received firm bids for approximately $10 million and has proceeded to accept binding commitments for a placement of $3,530,000 before costs.

In a nervous market, this is an outstanding achievement by a microcap company and it could only be viewed as a stamp of approval for the group’s projects and management’s ability to generate strong shareholder returns from their development.

Commenting on the outstanding support for the capital raising, Los Cerros’ managing director Jason Stirbinskis said, “The response to our capital raising and enthusiasm to sustain an expanded drilling program to test multiple gold-copper targets at Quinchia has been spectacular.

‘’With these funds we can pursue an extended drilling program well into 2021.

‘’We thank our shareholders who have supported this placement and welcome new investors to our register.

‘’With this placement and strong endorsement of our plans, we eagerly look forward to further developing the Quinchia Gold Project which includes Tesorito, Chuscal and Miraflores, starting with drilling at Tesorito targeted to start at the end of the month”.

In a sense, the significant support for the capital raising shouldn’t have come as a surprise with blue-chip multinational mining groups eyeing off Los Cerros’ assets.

The agreement took Los Cerros’ ownership of Chuscal to 100% and resulted in the company holding 100% of the entire Quinchia Project of which Chuscal is a part.

All of Los Cerros’ projects are located within the highly prospective mid-Cauca porphyry belt that hosts many multi-million ounce discoveries, some owned and discovered by AngloGold such as the Nuevo Chaquiro and La Colosa projects which have a combined gold equivalent resource of 55 million ounces.

AngloGold has deep understanding of Miraflores

AngloGold’s interest is particularly interesting in relation to targets identified by Los Cerros beyond the boundaries of the existing Miraflores gold deposit, part of the Quinchia project.

The newly identified targets have potential for high grade vein shoots and will be tested in the upcoming drill program.

Given recent improved understanding of regional geology, a recent review of the foundations of the geological model was undertaken to better understand the distribution of gold bearing structures within the resource envelope and beyond.

Modern exploration at Miraflores commenced with 10 diamond holes drilled by AngloGold Ashanti and B2 Gold in 2006-2007, followed in 2010 by TSX-V listed explorer Seafield Resources.

Los Cerros believes that the considerable data set generated by Seafield Resources has not been fully interpreted and assimilated, and there is the opportunity to develop a deeper understanding of the Miraflores structure and economic potential.

Close examination of this data has also prompted management to focus on the investigation of Tesorito and Chuscal, both of which are less than two kilometres from Miraflores.

However, this has elevated management’s interest in Miraflores itself, especially given strong gold forecasts and the advanced nature of Miraflores’ engineering and approvals.

To test the modelling, Miraflores targets will be added to the planned drilling program at Tesorito and Chuscal.

The study generated the following parameters based on capital expenditure of US$72 million for a retreat long hole stope with backfill mining operation feeding a 1,300 tonnes per day conventional cyanide leaching facility, producing average annual production of 48,000 ounces of gold per year over a 10 year operating life.

Crunching the numbers, you can see that such an operation would deliver substantially higher returns and reflect a much shorter payback period based on the current gold price.

The same sort of metrics can be applied across Los Cerros’ other assets, leaving the company strongly leveraged to movements in the gold price, and potentially the copper price.