At a time when share prices of many miners that produce battery materials commodities are surging, Galileo Mining Ltd (ASX:GAL) has commenced diamond core drilling at the company’s Lantern East prospect within the Fraser Range Nickel Belt in Western Australia.

The elevated interest in nickel is reflected in the commodity price which made another multi-year high of US$8.83 per pound last Friday.

This represents a gain of approximately 75% relative to where the commodity was trading nearly 12 months ago.

Lantern East represents a compelling nickel target with an electromagnetic anomaly occurring on the margin of a large intrusive rock unit.

This will be the first diamond drilling programme of the year for Galileo, but there is plenty more to come with 1000 metres of diamond drilling scheduled for completion depending on early results.

Given that the area has proven prospective for cobalt, similar to other discoveries in the Fraser Range region, the company carries additional interest for investors targeting the electric vehicle theme.

Galileo is focused on the exploration and development of nickel, copper and cobalt resources in Western Australia, and it has joint ventures with the highly successful Creasy Group over tenements in the Fraser Range which are highly prospective for nickel-copper sulphide deposits similar to the operating Nova mine.

As indicated below, modelling of electromagnetic data at the Lantern East prospect indicates that the top of the target is between 140 metres and 180 metres below surface. 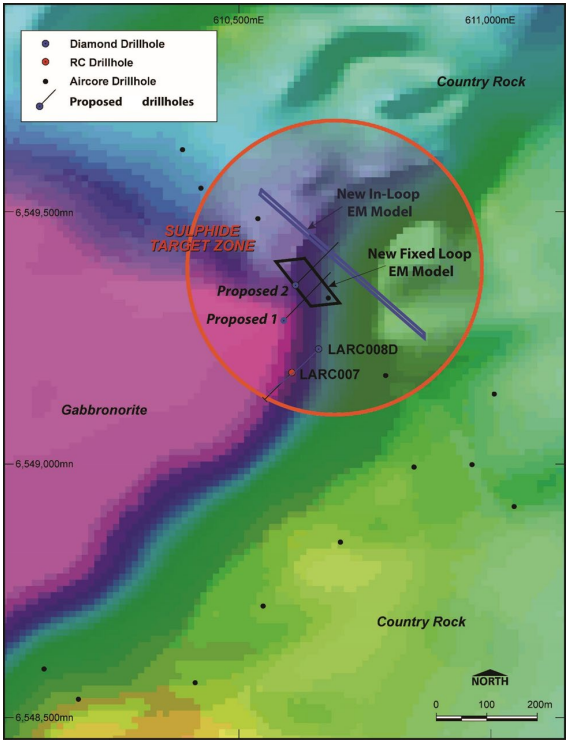 Diamond drilling represents a definitive target test to establish the cause of the EM response and whether it is related to nickel sulphide mineralisation.

Initial drilling is expected to take approximately 10 days to finish with management expecting to be in a position to update the market with all-important assays in the relatively near-term.

Commenting on the upcoming drilling program, Galileo Managing Director Brad Underwood said, “This is our first drilling program of the year and we have an exciting target to test at our Lantern East prospect.

"Our previous drilling in the area showed that we have the right rocks and we are now at the stage of testing the modelled conductors to determine whether they are related to nickel.

"Sub-surface conductors can have several sources and it is up to the drill rig to reveal what we have in the ground.

"This is an exciting part of the exploration process and we look forward to updating the market as results become available.”