Galileo poised to progress exploration at Fraser Range and Norseman

With drilling and field programs already locked in, Galileo Mining Ltd (ASX:GAL) is set for a busy start to 2021 and that could mean positive early newsflow from activities at both the Fraser Range and Norseman Projects in Western Australia.

This, in turn, could translate into significant share price momentum, similar to that which saw its shares increase four-fold between March and August this year.

Galileo’s founder and major shareholder Mark Creasy is one of Australia’s most acclaimed mining entrepreneurs, particularly when it comes to making new discoveries and he has been particularly successful in the Fraser Range region.

He played a leading role in both the Nova-Bollinger and Mawson discoveries which are in relatively close proximity to Galileo’s Lantern Prospects.

Creasy knows that patience pays dividends. He has held large tracts of the Fraser Range over the past decade via various entities including Galileo, and is intent on unlocking more nickel discoveries from the region.

Galileo is a well-funded ($7.7 million in cash at the end of September),systematic explorer, and has spent recent years undertaking EM surveys and preliminary drilling campaigns, which generally finds targets rather than delivering discoveries.

It will be in early 2021 when Galileo’s drilling campaign kicks into gear again, and that is when we are more likely to see material results come to hand.

The company has drill ready targets with a drilling contractor locked in. They are also conducting extensive EM surveys now, with the goal of generating additional drill targets. RC drilling is scheduled for February 2021, and likely to create significant interest in the company.

The project is located only 10 kilometres from the town of Norseman and the historic 5 million ounce Norseman Gold Mine.

Arguably of more importance though is its proximity to $485M capped Mincor Resources’ (ASX: MCR) high-grade massive and matrix nickel sulphide mineralisation at its Cassini North prospect –more on the nearology aspects of Norseman later.

Importantly, the area benefits from significant existing infrastructure with a sealed road linking the project to Kalgoorlie and Esperance, and ready access to gas, water and rail. The deep-water Port of Esperance is just 180 kilometres from the site.

A new nickel sulphide discovery in this area would be sure to create value for the Company.

Reverse circulation (RC) drilling of priority Fraser Range nickel targets at the Lantern East and Lantern South prospects have been scheduled for mid-February 2021, and this has the potential to deliver market moving news.

Approximately 1,200 metres of drilling is planned to test electromagnetic (EM) conductors at Lantern East and for deeper sulphide mineralisation at Lantern South.

Galileo managing director Brad Underwood highlighted that the company would be targeting deeper mineralisation at the Lantern South prospect in saying, “Galileo continues to execute its strategy of rapidly exploring highly-prospective targets within the emerging Fraser Range nickel belt.

“We have scheduled an RC rig capable of drilling greater than 300 metres deep to undertake the next round of drilling at our Fraser Range nickel project.

“The program is planned to commence in mid-February and will target EM conductors at the Lantern East prospect and look for deeper mineralisation at the Lantern South prospect.

“RC drilling is a fast, efficient, and effective method of drill testing and we look forward to getting these programs underway in 2021.” 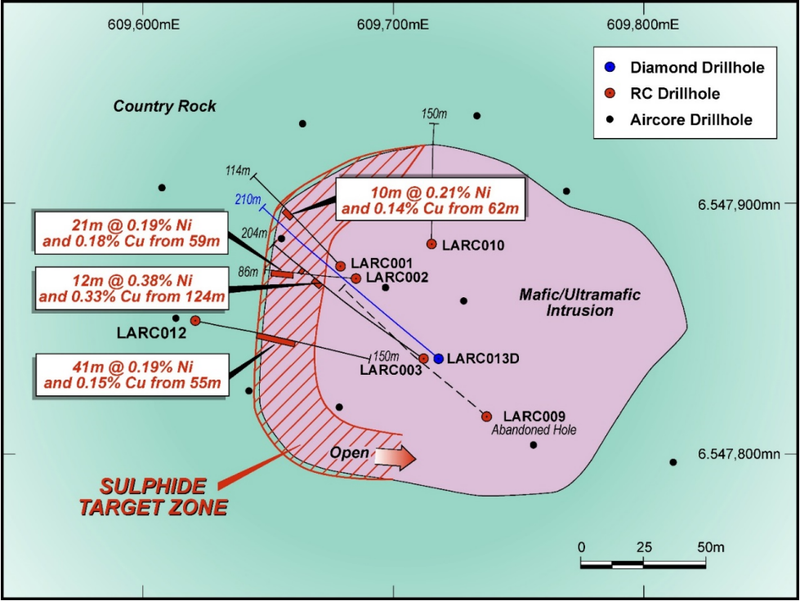 The revised models have conductivities ranging from 2,500 Siemens to 3,925 Siemens with the top of both bodies less than 180 metres below surface.

This is shown below, and it is worth remembering that previous intercepts at this prospect included 41 metres @ 0.19% nickel and 0.14% copper from 55m in LARC012

However, there are still large areas of prospective ground that have yet to be covered, and surveying is designed to continue until at least the end of March with the expectation that new conductive targets will be generated for drill testing.

Galileo looking to follow in Mincor’s footsteps at Norseman

“The Norseman area is located 50 kilometres south of the nickel deposits at Cassini, Mariners, and Wannaway, and contains the komatiite stratigraphy prospective for Kambalda style nickel mineralisation.

“We anticipate drilling at Norseman for nickel sulphides to commence in the second quarter of 2021.”

Mincor Resources‘ (ASX:MCR) had some outstanding success in September 2020 with a new high grade nickel sulphide discovery at Cassini North.

These are some of the metrics of Cassini, the new flagship mine and greenfields discovery by Mincor.

As shown below, the closest significant nickel occurrences occur 40 to 50 kilometres along strike to the north where the Cassini, Mariners, and Wannaway deposits are located. 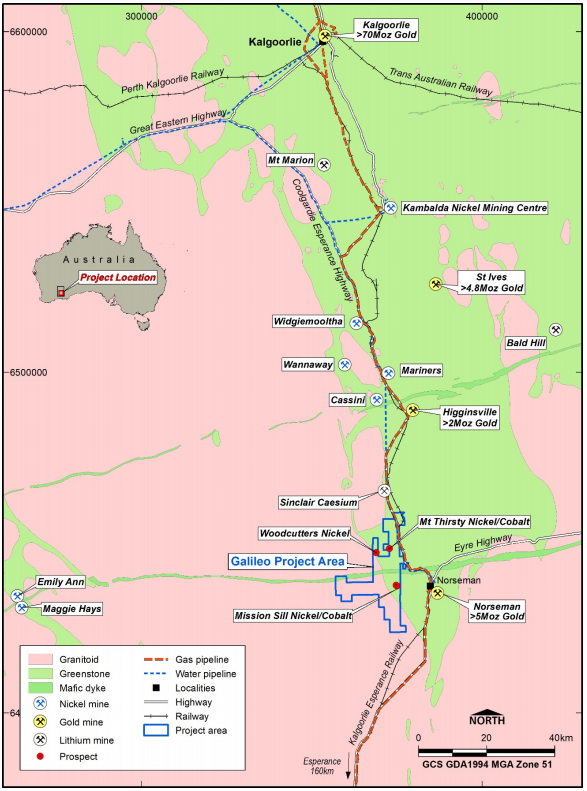 Galileo has recently collected 1726 all samples, targeting areas with strong potential for nickel. Laboratory assays are pending for the samples with fully interpreted results expected to be available in mid-January.

Drilling programs at Norseman are scheduled for Q2 2021 in what is a highly prospective and established nickel field.

Galileo is set to enter 2021 well-funded with a full program of discovery focussed exploration ready to go.