GAL has been conducting target generation work at its Norseman Project, where it has identified the palladium from an existing drill hole database.

Importantly, high palladium assay results have been identified in RC drilling beneath and adjacent to existing cobalt resources at Norseman.

Commenting on the new palladium targets at Norseman, Galileo Managing Director Brad Underwood said, “Our ongoing review of the Norseman Project has started to deliver results with the recognition of the outstanding prospectivity for palladium in the region.

“The existing drill results demonstrate the quality of the project and have provided the basis for a new understanding of the mineralising processes.

“This has led to the development of robust drill targets with the potential for a significant palladium discovery.

“We will be aggressively pursuing this exceptional opportunity in conjunction with our search for nickel sulphide deposits at the Fraser Range which includes our upcoming diamond drilling at the Delta Blues prospect.”

Palladium price rises on the back of

Palladium has been the subject of a substantial price increase and is now considered to be a ‘green’ metal, critical for pollution control.

This shiny white metal has become a critical component in catalytic converters. These are the part of a car's exhaust system that controls emissions and are found mainly in petrol and hybrid vehicles.

Eighty per cent of palladium is used in catalytic converters, which convert toxic gases, such as carbon monoxide, and nitrogen dioxide, into less harmful nitrogen, carbon dioxide, and water vapour.

As more and more clean energy cars are being built, the need for palladium has increased along with its price. 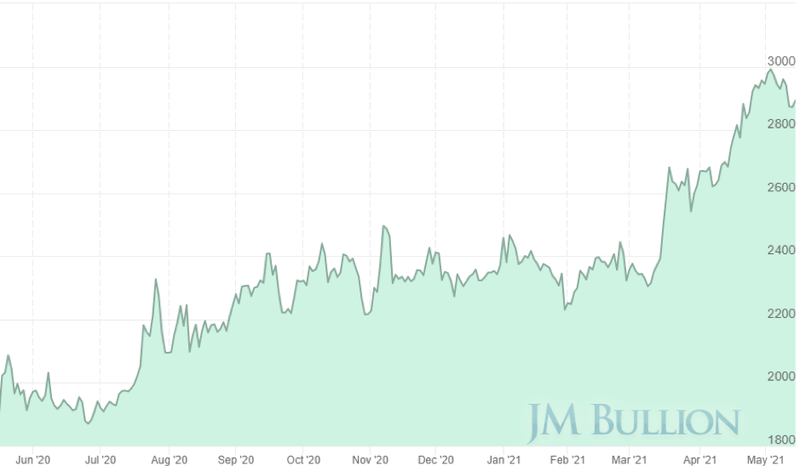 Drilling completed in 2016 by Galileo beneath the cobalt-nickel laterite resource at Mt Thirsty intersected a previously unrecognised zone of sulphide containing highly anomalous levels of palladium, platinum, copper and nickel as illustrated below. 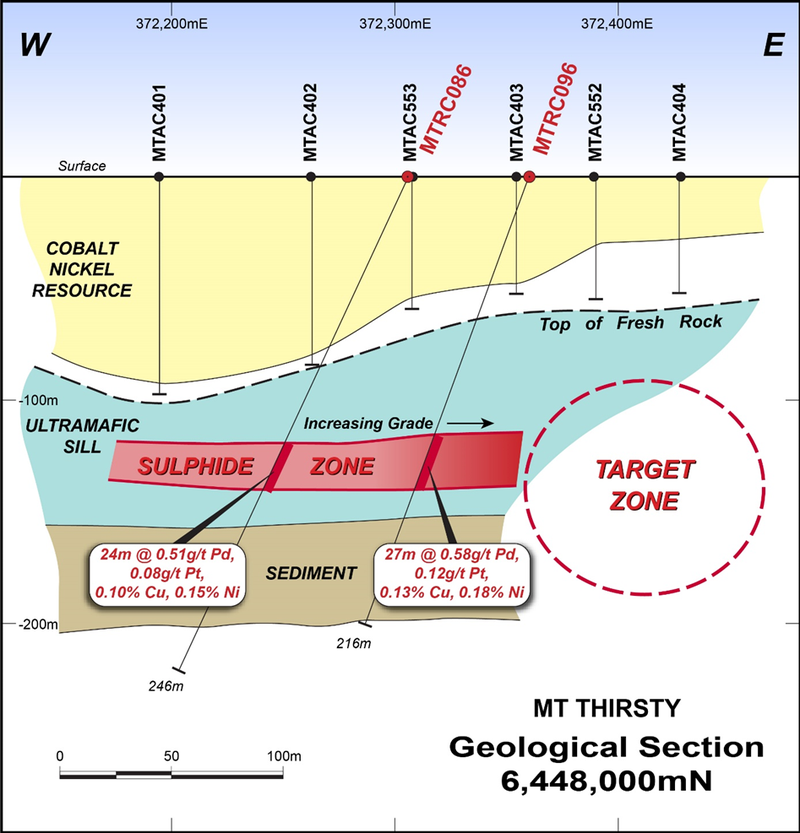 From a geological perspective, the sulphide zone occurs within an ultramafic rock unit interpreted to be an apophysis from the Mt Thirsty sill which is visible as a pronounced high in the magnetic map to the east.

The stratigraphy at the drill hole location is flat and the sharp magnetic contact is believed to represent the position at which the sill crosscuts stratigraphy.

This contact between the intruding sill and the flat lying stratigraphy is the prospective target zone with potential for higher grade mineralisation.

The grade within the sulphide zone increases towards the east as illustrated above (supporting the thesis that more mineralisation occurs within the target zone.

As indicated below, the prospective contact zone is easily traced to the north over five kilometres of strike and represents a substantial target. There is no record of any historic exploration for palladium/platinum along this basal contact position. 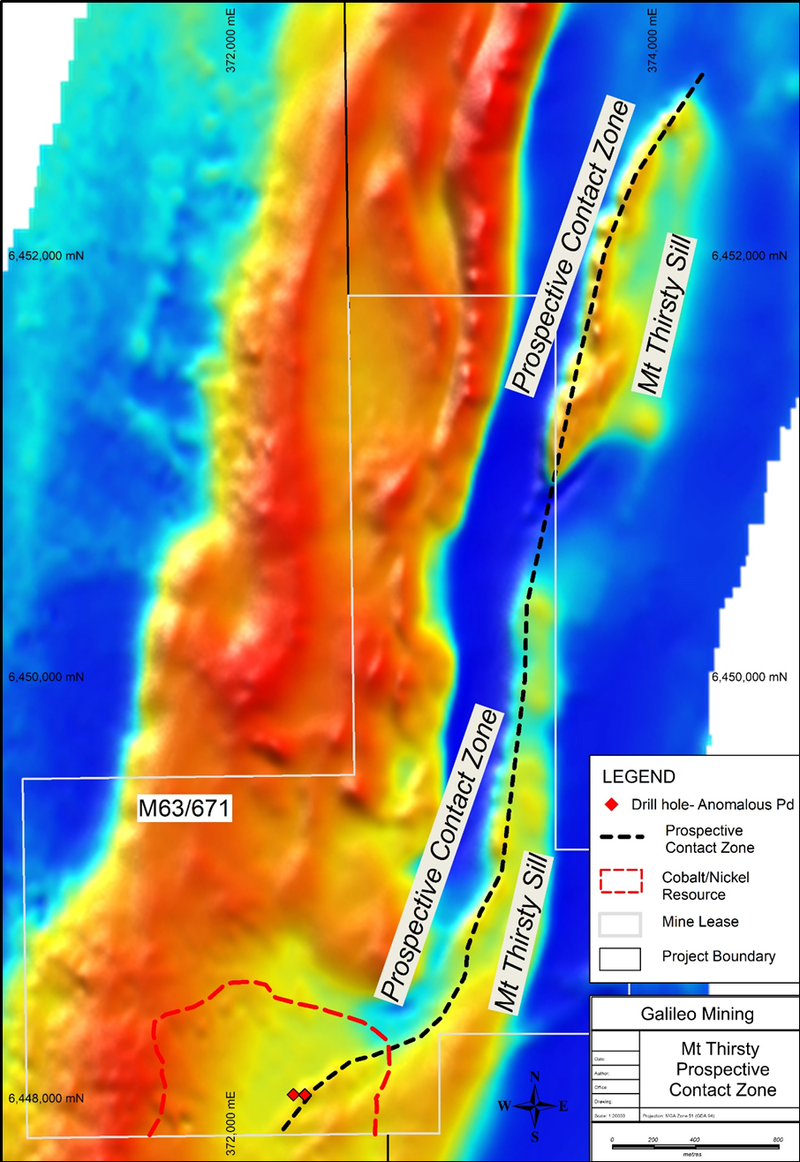 Drilling at the Mission Sill prospect in the year 2000 by Anaconda Nickel was designed to investigate the development of nickel laterite resources in the area.

Seven drill holes in the original program intercepted anomalous palladium and platinum within the near surface saprolite overlying the ultramafic component of the Mission Sill.

Later drilling by Australian Gold Resources (AGR) focused on the platinum potential in fresh rock in the ultramafic unit.

In subsequent drilling, Galileo also concentrated on platinum intercepts within the ultramafic as well as drilling out the cobalt-nickel laterite resource to JORC compliant resource standards.

The potential for palladium at the Mission Sill has now been recognised after a review of the data showed the existence of significant thicknesses of disseminated sulphide mineralisation (up to 5% in patches) at the contact between the ultramafic and mafic units of the Mission Sill.

Comprehensive drilling that has been undertaken is shown below and management indicated that there is a considerable possibility of higher-grade mineralisation along this contact position, especially where the geometry and relative exhumation of the sill changes along strike. 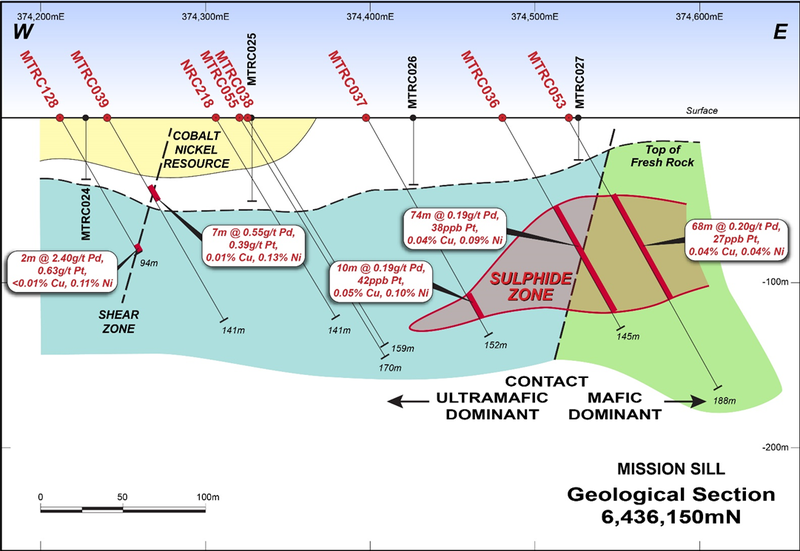 It is worth noting that intersection MTRC128 was accompanied by a rhodium grade of 0.18g/t - this is extremely significant as we will highlight later, particularly given that the rhodium price has even outperformed the palladium price over the last 12 months.

The prospective contact zone continues over 10 kilometres to the north, with additional prospectivity to the south on the southern flank of an offset ultramafic block.

This southern block also contains a cobalt-nickel laterite resource, and it was the subject of drilling by Galileo in 2018 to investigate the relationship between Platinum Group Metals (PGMs) and cobalt in the regolith.

The southern prospect contains the highest-grade palladium intercepted in weathered rock and the highest grades of rhodium.

The contact zone between ultramafic and mafic units has not yet been drilled at this location and is a priority target.

The location of these soil anomalies along with the broader 10 kilometres of prospective contact zone are illustrated below. 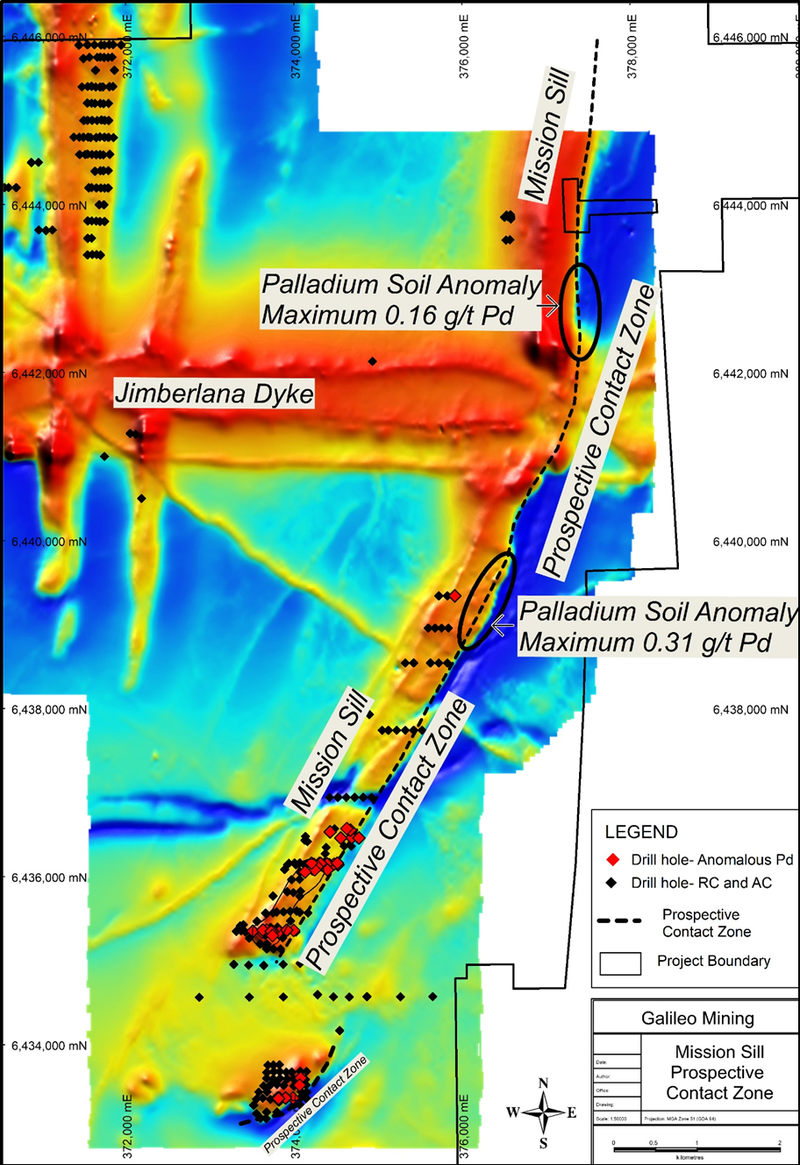 Occurrences of high-grade palladium up to 4.3 g/t have also been observed within fresh rock of the ultramafic unit at Mission Sill.

This intersection was accompanied by a rhodium grade of 0.18g/t and demonstrates the fertility of the host rock units.

However, the main focus for upcoming exploration is currently on the ultramafic/mafic contact zones where sulphides occur in association with palladium.

This is a similar position to where mineralisation occurs at other known deposits such as the Lac des Isles mine in Canada and the Munni Munni deposit in Western Australia.

As we mentioned previously, palladium has performed strongly over the last 12 months, but the surge in the rhodium price increase has been outstanding as indicated below, increasing from US$7250 per ounce to US$28,400 per ounce, a gain of nearly 300%.