It is here where Sirius Resources’ discovered the Nova nickel deposit in 2012 – a 14.4Mt at 2.3% nickel, 0.9% copper resource. That discovery led to Independence Group’s (ASX: IGO) acquisition of Sirius and the Nova Nickel-Copper Project in a $1.8 billion takeover deal.

In 2018, Silver Knight discovered its famed nickel-copper deposit, which belongs to the privately-owned Creasy Group.

In 2019, GAL’s Fraser Range neighbour, Legend Mining Ltd (ASX: LEG) unearthed a massive nickel sulphide-copper discovery at its Rockford Project’s Mawson Prospect. There was much talk of it being the “next Nova discovery”. 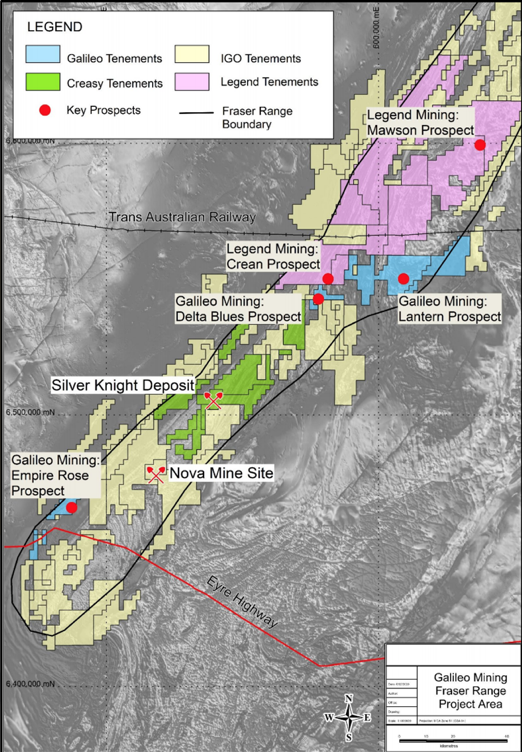 You can see the proximity of each of these projects to GAL in the map above, however also of note is that famed prospector, Mark Creasy, has been integral to each of these discoveries and is a major shareholder of Galileo which he also founded.

While the last hole drilled was a disappointment, it was one of many in a planned drilling program.

This most recent hole was completed to check for mineralisation beneath RC drill hole LARC012 and to establish a platform for down hole EM surveying.

So far it is pointing to positive results. GAL will glean valuable information from detailed structural and lithological logging of all drill core. This will assist with the understanding of the occurrence and nature of the mineralisation and benefit future drill targeting at the Lantern Prospects and within Galileo tenements over the surrounding area.

Downhole EM surveying at the Lantern South and Lantern East prospects will be completed to look for off- hole conductive targets that could represent significant accumulations of massive sulphides.

Disseminated Sulphide in LADD003 at 170m (pyrrhotite with minor pentlandite/chalcopyrite).

Over at the Delta Blues prospect, infill EM surveying has resulted in updated models for two targets at DB1 and DB2.

DB1 displays a particularly strong conductivity of 11,000 Siemens and DB2 also has a high modelled conductivity of 3,300 Siemens. While conductive targets can have multiple sources, it is encouraging that weathered sulphides have been recorded in aircore drilling less than 400 metres away from DB1. 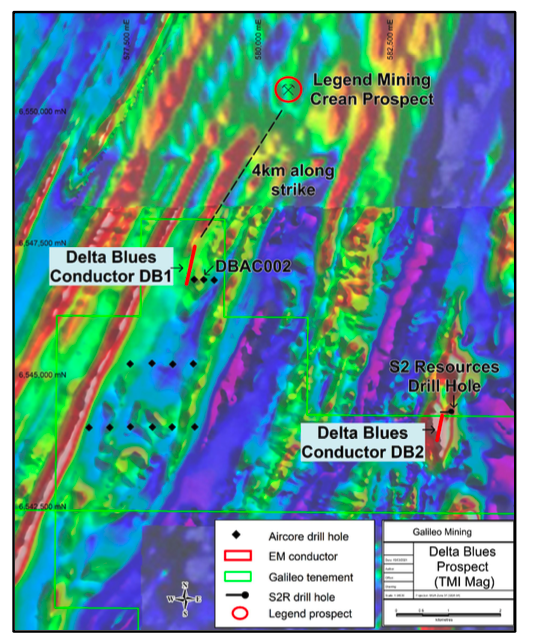 “We have completed our first diamond drilling program of the year at Lantern East and Lantern South, and continue to build up new targets for drill testing at our highly prospective Fraser Range Project,” Galileo Managing Director Brad Underwood said.

“The drilling results show that we have sulphides occurring in the right geological environment on our tenements. This means that we have the correct components required to form a mineral deposit and we will continue to aggressively explore for economic mineralisation.

“We have developed good quality nickel targets from our initial work over the previous two years on this greenfields project. Our drilling programs in 2021 are designed to test these targets with the aim of making new discoveries.”