Galileo Mining Ltd (ASX:GAL) informed the market on Wednesday that aircore drilling is scheduled to commence next week at the Lantern South Prospect in Western Australia’s Fraser Range Nickel Belt following receipt of Mines Department approvals for follow up drilling around the nickel-copper sulphide intersection.

A 4000 metre aircore program is planned along strike of the sulphide mineralisation in LARC003 on the margin of a large intrusion with similar geology to the Nova ore body.

As illustrated below, over two kilometres of untested strike length occurs at the Lantern Prospect with a large magnetic feature interpreted to represent the contact between the prospective intrusions and their host rocks. 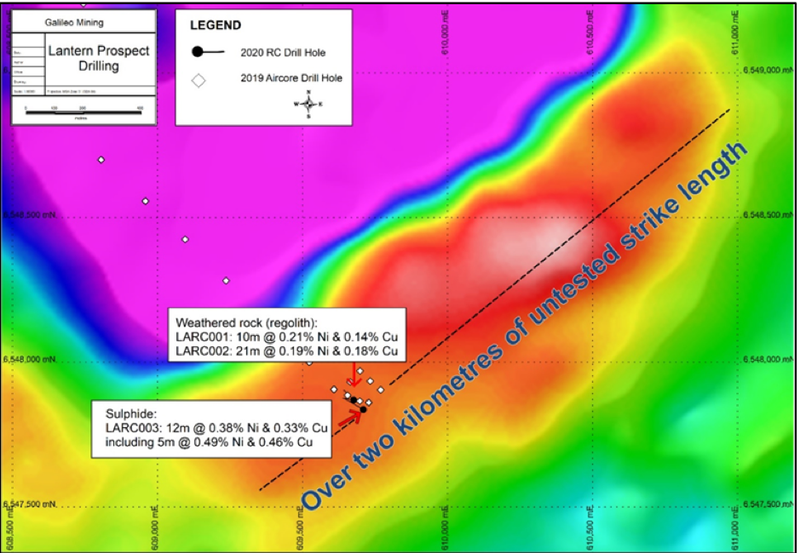 Commenting on the upcoming program Galileo Managing Director Brad Underwood said, “This next round of aircore drilling will be an important step in the follow-up exploration of the sulphides already discovered at the Lantern Prospect.

‘’With over two kilometres of untested strike length we are aiming to identify mineralisation similar to Nova-style nickel deposits.

‘’Our petrography results are again telling us we have the right rock types to host a nickel deposit and, with Legend Mining recently having made a discovery along strike at the Mawson Prospect, this is a very exciting time to be exploring in the Fraser Range.’’

Indeed, the Legend Mining (ASX:LEG) story has just got bigger and better with the group having delivered outstanding exploration results from the Mawson project in late March.

Diamond drilling delineated five intervals of significant nickel-copper sulphide mineralisation totalling 41.5 metres, prompting management to identify that particular drill hole as the most significant and exciting discovery in the Fraser range since Nova.

One of Australia’s most successful miners in terms of delivering large discoveries is Mark Creasy, and he has a particularly strong position in the project through his 26.8% shareholding in Legend Mining.

Similarly, he is at forefront of Galileo Mining’s foray into that region.

Creasy founded the group and he is the major shareholder with a 31% stake.

As you can see below, little separates the two projects in terms of location and just as he has done with Nova to the south and Mawson to the north, Creasy will be looking to hit the jackpot with Galileo’s Lantern project. 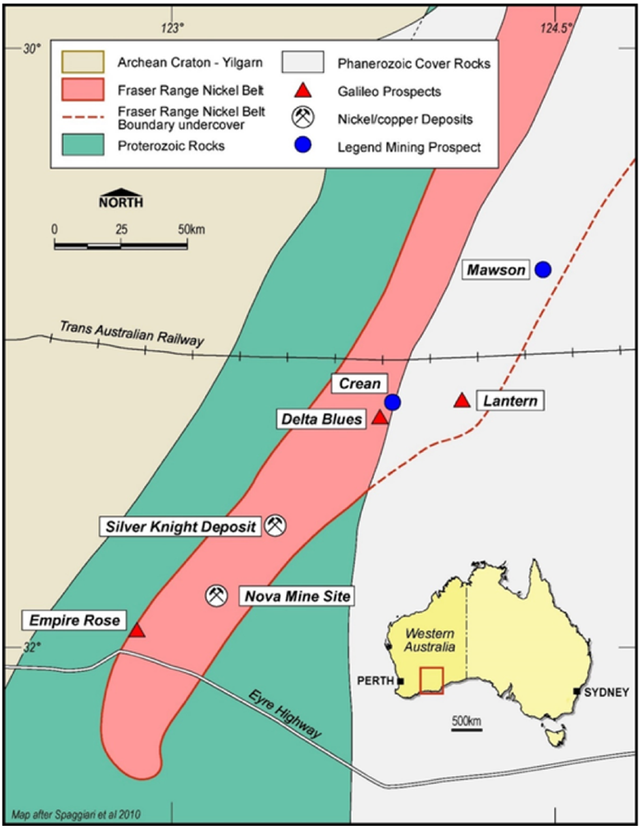 Two priority targets have been developed in the Lantern area and have been renamed Lantern North and Lantern South.

Both targets occur on the margin of a large gabbronorite intrusion measuring 2 kilometres by 2.3 kilometres on surface, similar to the dimensions of the Nova sill complex which measures 2.4 kilometres by 1.2 kilometres. 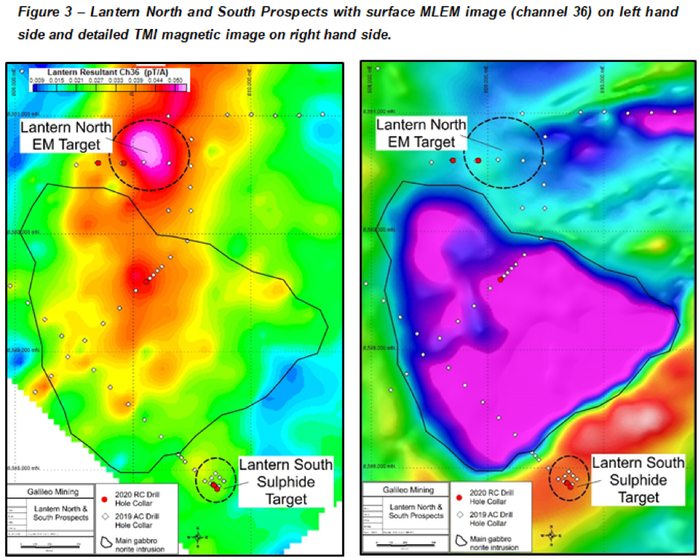 A first-pass aircore drilling program at the Lantern South Prospect in 2019 identified a nickel and copper geochemical anomaly.

RC drilling beneath this anomaly in March 2020 showed that it was caused by disseminated nickel-copper sulphide mineralisation.

Galileo now plans to investigate the two kilometres of strike around the sulphide intersection with additional aircore drilling for the purpose of identifying geochemical responses which, if found, are likely to be related to further sulphide mineralisation.

The approved 4000 metre aircore drilling program has been designed around and along strike of LARC003 (see Lantern Prospect Drilling map) which intersected the disseminated sulphides.

A magnetic anomaly in the area is interpreted to represent the contact between prospective intrusive rocks and their host rocks.