The results represent maiden confirmation of a section of primary massive sulphide with high levels of nickel, copper and cobalt.

Achieving nickel/copper levels in sulphide is very rare and has been known to lead to major discoveries in the Fraser Range including Sirius Resources' Nova discovery and Legend Mining (ASX: LEG)'s Mawson discovery. Sirius was acquired by Independence Group (ASX: IGO) in 2015, after moving penny stock status to being valued at $4.38 per share, or $1.8 billion. In December 2019, the Mark Creasy backed LEG made a ‘Nova-like’ nickel-copper discovery and went on a massive +109 per cent run as it confirmed it was onto something big at the Mawson prospect.

However, today’s news is much more significant and provides the company with a step-change in mineralisation understanding.

In managing director Brad Underwood’s words, ‘’For the first time we have identified a small section of primary massive sulphide with high levels of nickel, copper and cobalt.

‘’This means we have identified a mineralised system that can produce high-grade nickel and copper.

‘’Our job now is to focus on those areas that have the potential to hold large accumulations of economic sulphides.’’ 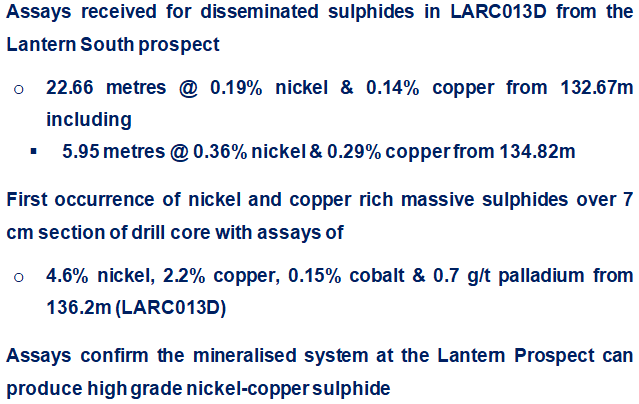 These comments are very reminiscent of those made by Creasy to LEG's managing director Mark Wilson when the group received its first sniff of success which eventually led to the Mawson discovery, just to the north of Lantern.

The company was at an earlier stage of much shallower aircore drilling and received results that weren’t quite as stunning or definitive, but promising for early-stage drilling, prompting Creasy to say to Wilson, ‘’You’ve found the haystack - now go find the needle.’’

And that he did, resulting in a ten-fold share price increase over the next couple of years as what appeared to be ‘highly promising’ became a major discovery.

While at a more advanced stage with arguably more certainty, Galileo is at a similar inflection point as it sets its sights on being the next company to claim a game-changing discovery in the Fraser range region.

The timing couldn’t be better with copper at a long-term high of more than US$3.00 per pound and nickel just last week pushing above US$7.20 per pound for the first time in nearly 12 months 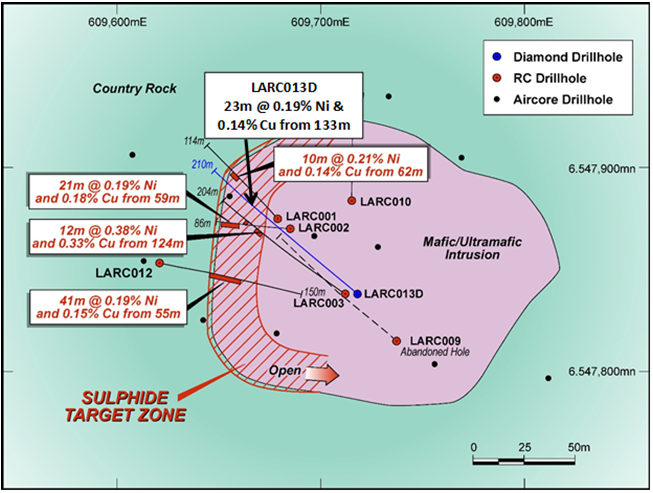 A 23-metre section of heavily disseminated, blebby and banded nickel-copper sulphides in ultramafic host rock was intercepted in the diamond drill hole.

Of great importance though was the intersection of a 7 centimetre band of primary, massive sulphide shown below as this section assayed 4.6% nickel, 2.2% copper and 0.15% cobalt, demonstrating the ability of the mineralising system at the Lantern Prospect to create high-grade nickel and copper sulphides. 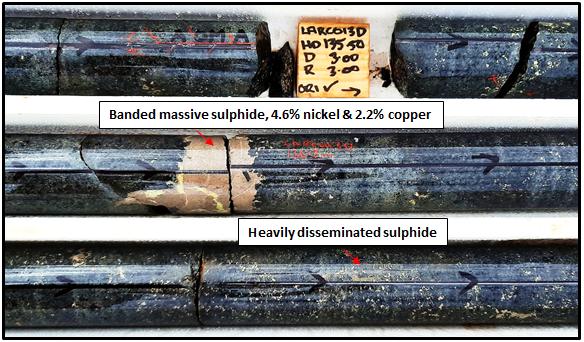 Only a limited amount of drilling has been undertaken at the Lantern prospects with Galileo being the first company to explore the area for basement mineralisation.

No previous nickel exploration has occurred on Galileo’s northern Fraser Range tenure which provides the company with a first-mover advantage on a virgin greenfields property in a new nickel belt.

RC drilling and diamond drill core logging suggests that the best potential for further mineralisation at Lantern South is towards the south of the intrusion where the projected sulphide zone wraps around the intrusion.

This area can be seen on the above map, situated in the south-east corner (sulphide target zone).

Additional RC drilling has been planned beneath and to the south of LARC012 to expand the footprint of mineralisation and to identify those areas with the greatest capacity for higher grade mineralisation.

Ultra-high speed micro XRF scans of the massive sulphide and disseminated sulphide sections were completed and this analysis has yielded valuable information on the nature of the mineralisation including style, texture and mineralogy.

A Bruker M4 Tornado was used to generate images of the drill core which indicated that the sulphide mineralisation is primary in nature and has not been remobilised.

The occurrence of high-grade nickel-copper primary massive sulphide within Galileo’s tenements at the Fraser Range is a noteworthy step to say the least in the exploration process and demonstrates the potential within the area.

Nickel-copper sulphide mineralisation of this type is very rare within the Fraser Range and with few other known locations including the Nova mine site, the Silver Knight deposit, and the Mawson Prospect.