By way of background, GLN is exploring for lithium brines within South America’s Lithium Triangle on the Hombre Muerto salar in Argentina. Hombre Muerto is proven to host the highest grade and lowest impurity levels within Argentina and is home to Livent Corporation’s El Fenix operation and Galaxy Resources and POSCO’s Sal de Vida projects.

GLN's primary target is the adjoining Candelas channel target, a ~15km long by 3‐5km wide valley filled channel which has the potential to host a substantial volume of brine.

Field activities have already begun in preparation for drilling at Candelas. 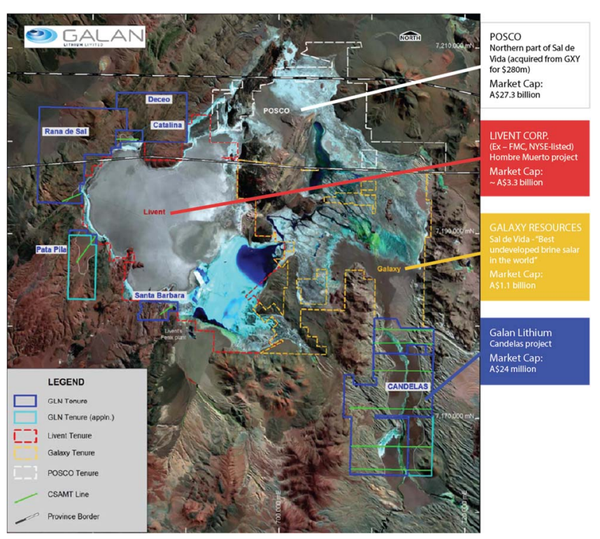 GLN will now undertake the process of awarding a number of contracts to local bodies to perform drilling, camp establishment, OH&S and technical assistance. The company has indicated it remains committed to sourcing and contracting locals of the Catamarca Province for its operations.

Initial drill holes will test the previously generated geophysical model and provide a detailed data analysis to over 400 metres deep on the stratigraphy within the Candelas channel.

The maiden drill program will comprise of five holes, which will be drilled over ~12-15km along the extent of the Candelas channel.

GLN managing director Juan Pablo Vargas de la Vega, commented on today's update: “This is a significant step forward for Galan in Argentina. Obtaining the drilling permits for our maiden campaign is a reflection of the company’s teamwork and experience in Argentina and Australia.

“The company is fully committed to swiftly unlocking the significant lithium potential at Candelas and we are now focused on finalising all the required activities needed to prepare for drilling which will start early in the New Year.”