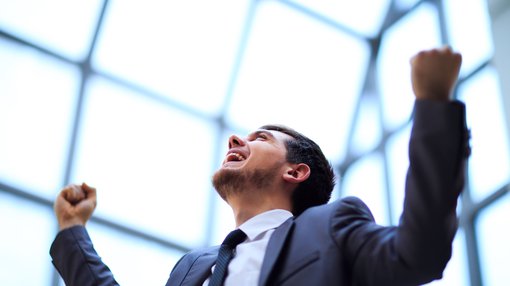 Galan Lithium Ltd (ASX:GLN) released outstanding drilling results from its Candelas Lithium Brine Project in South America on Wednesday, triggering a sharp and sustained surge in the company’s share price which saw it trade as high as 41.5 cents on Thursday morning.

While this represented an increase of approximately 15% since the news was announced, the recent share price strength has been part of a broader rally that commenced two months ago.

Defying some negative sentiment towards the lithium space, Galan’s shares have more than doubled during this period, no doubt attributable in part to the company having snared a prime piece of territory in the world renowned ‘lithium triangle’.

Importantly, drilling at the site which is immediately to the south-east of the Hombre Muerto salar in Argentina is only at the very early stages.

Consequently, there is the potential for further positive newsflow as the company targets highly prospective areas within the ‘lithium triangle’. 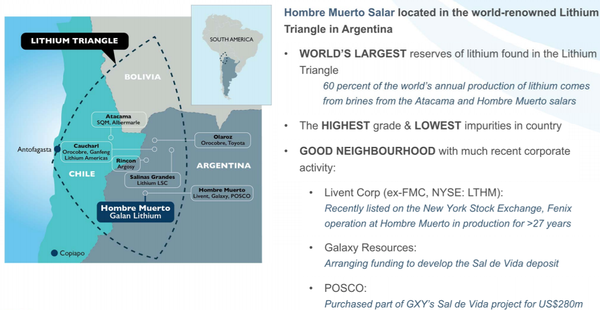 Brines were encountered for 166 metres from approximately 235 metres to the end of the drillhole.

The impurity levels of less than three relative to the Mg/lithium ratio are comparable with high-quality brines currently being mined at Salar del Hombre Muerto.

More detailed information of the results is shown in the following table.

This region is home to Livent Corporation’s El Fenix operation and Galaxy Resources and POSCO’s Sal de Vida projects with the area known for its high grade, low impurity mineralisation. 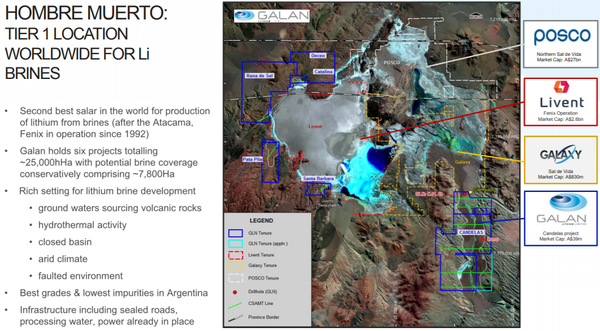 As such, management has been hoping to identify similar quality lithium bearing brines in a geological setting consistent with the Hombre Muerto salar.

This has been achieved with the highly successful maiden drillhole (C-01-19) having been completed at a depth of 401 metres.

The drillhole encountered a substantial intercept of brine from depths of approximately 235 metres to the end of the hole within coarse clastic sediments to 311 metres and then fractured basement lithologies to 401 metres.

“We have encountered exceptionally good grades with low impurities which are comparable to the rest of Hombre Muerto Basin where Livent, POSCO and Galaxy have their operations.

"We believe we have a potential world class lithium project on our hands which we are keen to further demonstrate in our ongoing drilling.” 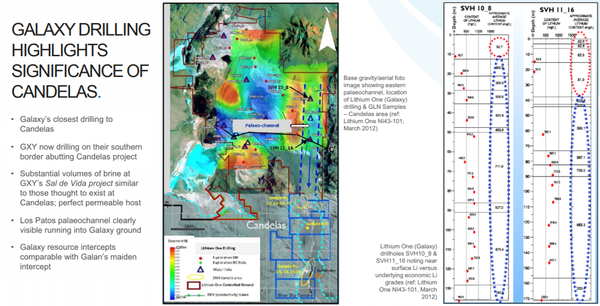 Flow rates were observed to be very good throughout the intercept, however these diminished near the end of the hole.

Detailed flow rate testwork is planned for a later date and the drill rig will now be moved to the second site located approximately 9.5 kilometres to the south.

Galan aims to fast track the exploration work at Candelas with the goal of targeting a resource as soon as practicable.

This maiden drill programme is planned to comprise five holes drilled along a 15 kilometre extension of the Candelas channel.

Promising signs for Galan at Candelas