The Conference, held in Fremantle, has earned a reputation as the major Australian forum for the junior resources sector, with mineral exploration companies and emerging new miners attracting an ever-growing group of brokers, fund managers and investors

to hear their presentations.

Galileo will highlight its investment opportunity, including its strong cash position of ~$6.9M (as at 20 December 2020), its high value targets on the Fraser Range nickel belt, as well as the strength of the team driving its Fraser Range JV and Norseman Projects.

There is a lot to like about Galileo. It is up 140% since March last year, however 2021 could prove to be a breakout year as it ramps up operations at the prospects it believes will be the the cornerstone for a long-term nickel operation.

GAL has a number of high value nickel targets in the Fraser Range province of WA.

This is where Sirius Resources made a $1.8 billion nickel discovery in 2012, led by mining entrepreneur Mark Creasy, who is the founder of GAL and holds a 26% shareholding.

Sirius was the first major discovery in the Fraser Range, and those working on the region believe it could be the first of several to come.

Compared to more mature nickel belts in the world, the Fraser Range has only two deposits with over 150km strike length, and total known resources of 18 Mt.

The Thompson Belt in Canada hosts more than 10 deposits and total known resources of over 146 Mt occur over a similar strike length to the Fraser Range.

You can see the differences below:

Galileo has high value targets in the Fraser Range.

Creasey, the man behind Sirius’ Nova discovery retained large swathes of what he thinks is the very best Fraser Range ground to serve up the next major nickel discovery.

The targets are within the Fraser Range JV Project (67% GAL, 33% Creasey JV Group) and the Norseman Project. The Fraser Range Project holds the Lantern Prospect along strike from Legend Mining’s Mawson Prospect and the Delta Blues and Green Moon Prospects, where GAL is currently developing targets. The Delta Blues Prospect is along strike from Legend Mining’s Crean and Worsley Prospects.

The Norseman Project hosts a high grade cobalt laterite resource of 25Mt JORC with 26,600t of contained cobalt & 122,500t of contained nickel. This project exposes GAL to an improving cobalt price over US$45,000/tonne. 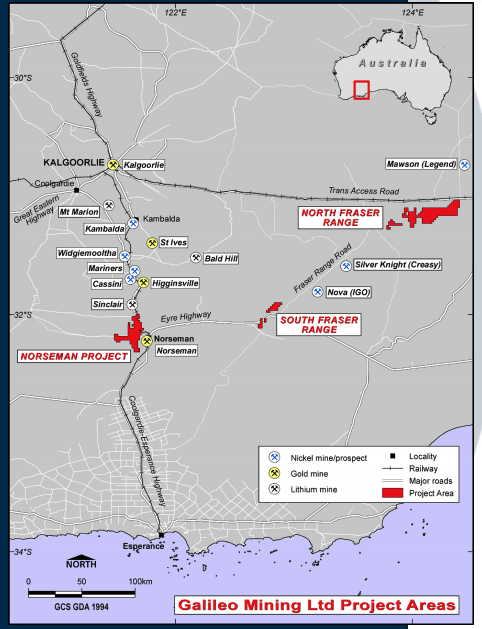 Both these projects are part of GAL’s strategic commodity and district focus and there are several active exploration zones in play.

As Finfeed previously reported, three large and strong conductors have been modelled from the EM data at shallow depths between 95 and 170 metres below surface. Infill EM surveying of the newly identified targets is planned to be undertaken in conjunction with ongoing regional surveying at the Delta Blues Prospect.

Infill surveying is expected to be completed this quarter with drill planning to commence upon receipt and interpretation of the supplementary data.

Read: Galileo identifies another prospect in the Fraser Range

The highly promising Lantern Prospect will be the focus of near-term drilling, with GAL also potentially looking at another site in Delta Blues just to the west of Lantern. 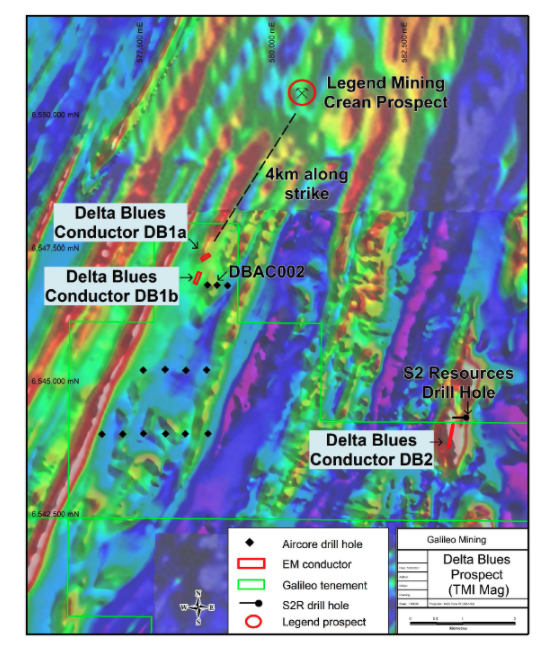 The close proximity of Delta Blues to Lantern, as well as other major deposits being developed by IGO (Nova) and Legend Mining (Mawson) can be seen below: 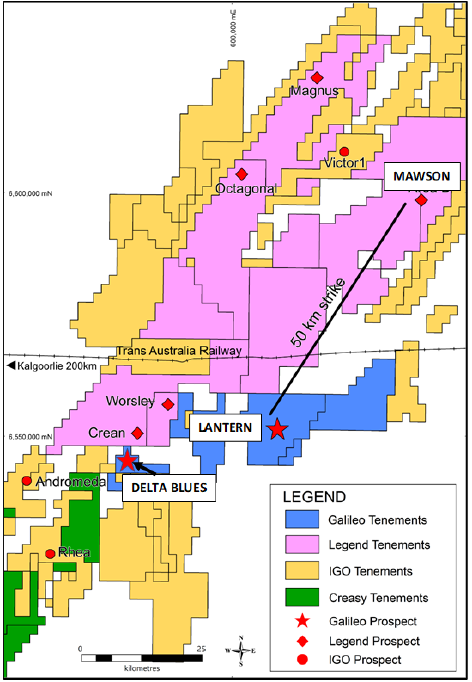 Given its proximity to NOVA and Legend’s major projects, GAL stands as one of the best emerging nearology plays in the Fraser Range nickel province. 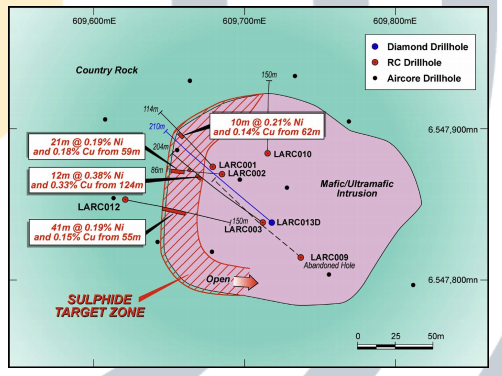 Limited drilling has been undertaken so far, however there is the potential for additional mineralisation, with the prospect open to the south and at depth.

Diamond drilling is scheduled to commence next week.

As for Lantern East, which is 1.6km along strike from Lantern South, magnetic interpretation indicates large gabbronorite intrusion which has been confirmed by aircore drilling. The initial EM target has been generated by large scale Moving Loop EM and follow up Fixed Loop EM.

108m of disseminated pyrrhotite sulphide has been seen in the only diamond drill hole so far completed (LARC008D), with the source of conductive anomaly adjacent to sulphides in LARC007 and LARC008D yet to be identified. This suggests potential for additional sulphide mineralisation.

Diamond drilling of updated EM models is also scheduled to begin next week.

The Norseman-Wiluna greenstone belt is a particularly prospective part of the world, having produced most of Western Australia’s nickel over the past 50 years, and there is believed to be plenty more to still be discovered.

The project is located in a premier location, at the southern end of the prolific Norseman-Wiluna greenstone belt. It is 10km from the town of Norseman and the historic 5 Million oz Norseman gold mine, while there are numerous nickel, gold, and lithium mines in the region.

Recent soil sampling programs are currently being integrated with other data sets to develop focus areas and targets are anticipated for drilling mid-2021.

GAL’s Managing Director Brad Underwood is a highly experienced geologist, with a track record of working alongside Mark Creasy, including on the Silver Knight nickel discovery in the Fraser Range - a privately held deposit with a 4.2 Mt resource just 50km along strike from GAL’s ground.

By applying methodical exploration processes across the assets, and an intimate knowledge of Fraser Range geology, GAL is able to conduct regular, extensive drilling campaigns every year, and place the company with the best possible chance of making a discovery.

Drilling at its Lantern Prospects next week, will continue GAL’s strong start to the year, with campaigns planned through to the June quarter’s drilling at Norseman.

Given its location, its assets and the experience of its management team, the company looks to be highly leveraged to discovery success.