These newly identified intrusions have the potential to host magmatic nickel mineralisation under shallow cover rock ranging from 17 to 92 metres below surface.

The company is planning a high-powered ground electro-magnetic (EM) survey to cover these intrusions with the intention of defining zones of potential nickel mineralisation.

The search space around the Lantern intrusion has now increased substantially to an area of 10km by 8km.

Commenting on the new targets Galileo Managing Director Brad Underwood said: “Our recent $5 million placement has allowed us to expand the amount of exploration we are undertaking in the Fraser Range.

“We have now substantially increased the search space around our Lantern Prospect and have the funds to effectively explore the entire area over the next six to twelve months. Our Fraser Range ground has never before been explored for nickel and the significant chance of a high value discovery makes this is an exciting time to be investing in the area.”

The funds have enabled the company to accelerate its exploration plans, doubling its current drilling program from 4,000m to 8,000m at the Lantern Prospect. 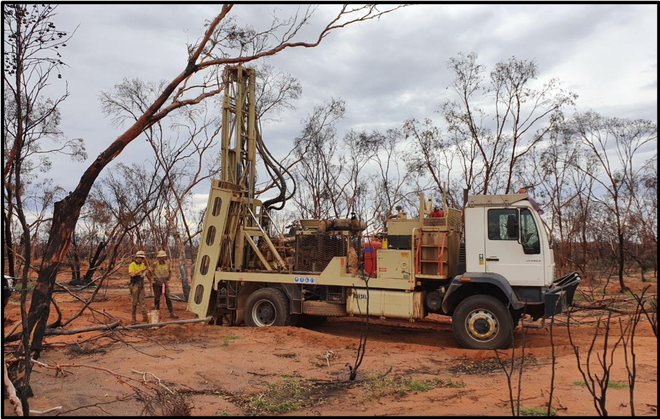 For the drill holes completed at the newly named Green Moon, Backwood and Think Big prospects, the cover rock varied between 17 and 92 metres. Beneath the cover rock the basement is uniformly Proterozoic in age with mafic-ultramafic rock units intruding into a predominantly mafic granulite host rock.

Samples of fresh rock (or near to fresh) from the Proterozoic basement were sent for petrographical analysis where the samples were sliced, polished and described under the microscope.

Minerals occurring within the samples and their relationship to each other were then observed to determine their provenance and prospectivity for nickel sulphide mineralisation.

Drill holes at the Think Big, Backwood and Green Moon Prospect were found to have intersected mafic or ultramafic rocks with the shape of the intrusions interpreted as shown below. 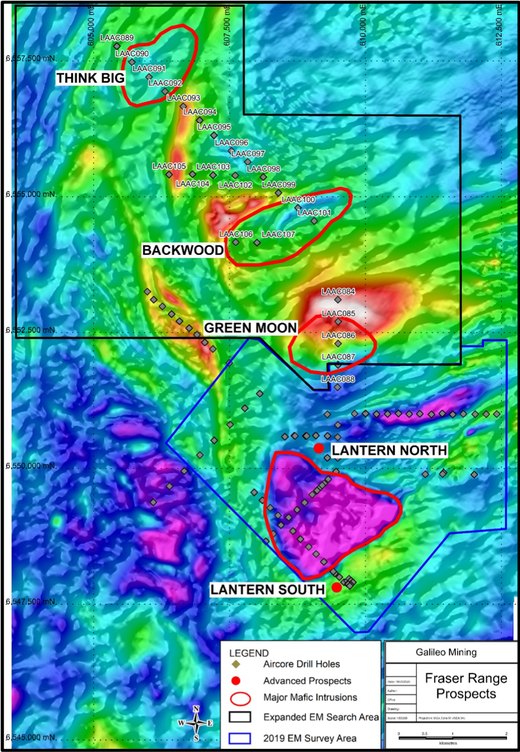 Mafic and ultramafic intrusive rocks are critical in exploration for the type of deposits described as “magmatic nickel sulphides” which occur at the Fraser Range.

The best-known example of magmatic nickel sulphide in the Fraser Range is IGO’s currently operating Nova Nickel Mine. At this location nickel mineralisation is intimately associated with mafic and ultramafic intrusions.

Galileo is following a similar exploration methodology with drilling used to demonstrate the occurrence of nickel prospective rocks prior to EM surveying. EM surveying at Galileo’s new prospects aims to directly detect zones of sulphide mineralisation.

The Magnetic Background Image above shows the expanded EM search area over the new prospects at Think Big, Backwood and Green Moon.

Galileo also report that aircore drilling is progressing well at the Lantern South prospect with over 5,500 metres completed of a planned 8,000 metre program.

The drilling at Lantern South is following up on initial RC drilling results of 12 metres @ 0.38% nickel and 0.33% copper in LARC003. The occurrence of mineralisation at Lantern South shows the potential of the rocks in the area to host nickel-copper sulphides. Lantern North and South Prospects with surface MLEM image (channel 36) on left hand side and detailed TMI magnetic image on right hand side.

The above images show the response from ground moving loop EM surveying over the 2km by 2.3km Lantern intrusion (left) with the image on the right clearly depicting the magnetic response.

The best targets identified to date are on the margins of the intrusion, particularly at Lantern South, where ultramafic cumulate rocks containing sulphides have been drilled.

The western and eastern flanks of the intrusion have yet to be drill tested and represent compelling targets based on available results. A first pass line of aircore drilling on the western flank of the large intrusion is included in the current aircore program.