Former Macquarie and HSBC resources analyst, Simon Francis, has identified American Pacific Borate and Lithium (ASX:ABR) as a potential ten-bagger on the back of its impressive definitive feasibility study (DFS) relating to the Fort Cady (US) project.

The project boasts a post-tax NPV10 (net present value at a 10% discount rate) of approximately US$1.1 billion.

In January 2019, ABR released a low-capex ‘enhanced’ version of the DFS that splits Phase 1 into two parts, and is now considered ‘base case’.

The DFS is built around the production of sulphate of potassium (SOP) and commercial scale boric acid.

The second stage of development (Phase 1B) should see full production from the 82,000 tonnes per annum Phase 1 boric acid plant.

One of the key benefits of adopting a phased approach is access to early-stage revenues that will assist in funding latter stage development.

Taking this approach will also make it much easier for the company to achieve more modest debt financing, and in the case of raising capital through the issue of shares, the earnings per share dilution will be minimised.

As indicated below, the demand outlook for borates indicates a substantial uptick around the time that Fort Cady comes into production, a level that is expected to continue to grow out to 2050 and beyond. 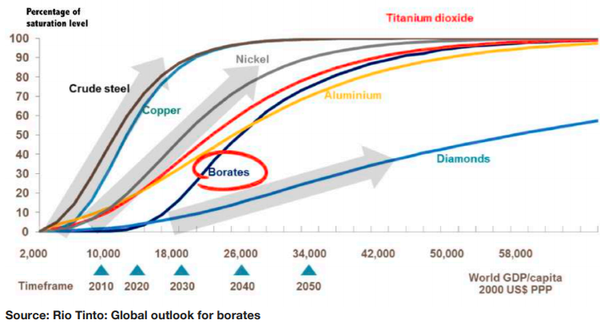 Putting this in enterprise value (EV) terms, Francis crunched the numbers on a mix of financing scenarios, projecting that ABR could attract an EV in a range between US$325 million and US$542 million within 12 months.

The following is a valuation based on the January 2019 DFS base case. 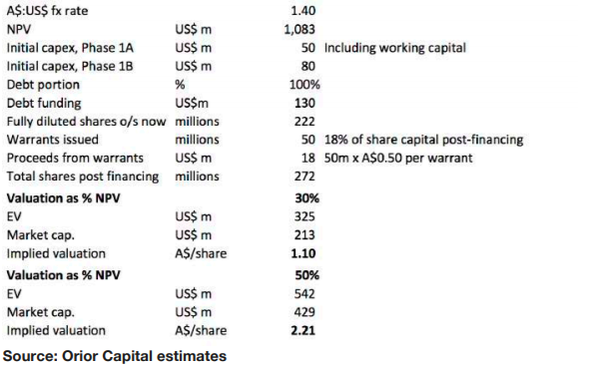 The release of a comprehensive report by Francis has evoked significant interest in ABR with the company trading as high as 18 cents on Tuesday morning, up 16% on yesterday’s closing price.

While being able to boast a US$1 billion project is headline-grabbing in its own right, arguably one of ABR’s most compelling investment metrics is its relatively near-term production outlook.

In many cases, large-scale projects involve long lead times, but ABR expects first production from Phase 1A to occur in the December quarter of 2020.

Based on the DFS, phases 1B, 2 and 3 are expected to start two, four and six years after 1A.

Also working in ABR’s favour is the fact that few new projects are in the pipeline, and the borates market is essentially a duopoly with Eti Maden and Rio Tinto controlling 80% of global demand.

Boron and borates are used in many modern applications from abrasives to water treatment, and from soap to nuclear power plants, as well as being a product of need for emerging new age technologies such as devices requiring lithium ion batteries and hydrogen fuel cells.

The global market for boric acid (H3BO3) reached 3.9 billion tonnes in 2017, with the market expected to continue growing at approximately 4% per annum. 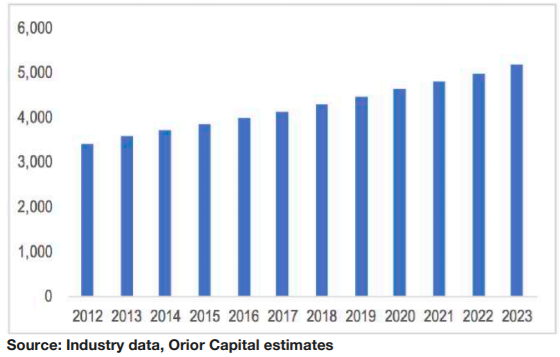 Borates demand is being driven by the ‘big picture’ trends of urbanisation, energy efficiency, and food security.

To put the value of the borates market into perspective, Francis said that it is about the same size as the US$3 billion lithium market.

The prospect of early production and easier financing at potentially less onerous rates is definitely an attraction, but it also pays to look behind the scenes to get a full appreciation of what Fort Cady has to offer in terms of potential development and predictability of outcomes.

Understanding Fort Cady’s past provides an insight to what may lie ahead for ABR.

The Fort Cady project is a past-producing asset, with US$60 million invested in extensive historical development.

The deposit was first discovered in 1964 and limited scale solution mining was undertaken in 1981, and some 450 tonnes of boric acid were produced from pilot scale operations in 1987-1988.

The project was fully approved for commercial scale operations in 1994.

This included a second pilot plant from 1996 to 2001 that used sulphuric acid as the leachate and produced some 2,300 tonnes of a synthetic colemanite product called ‘CadyCal’.

Francis explains that colemanite is a calcium-based borate that does not contain sodium, an important property because in applications such as E-glass, the most common form of glass fibre, and some types of borosilicate glass, such as those used in TFT-LCDs, low- or no-sodium borates are used.

Colemanite resources are rare and vital, and currently Turkish state-owned entity Eti Maden has a virtual monopoly in mining colemanite on a commercial scale.

Fort Cady hosts the only other major, commercially viable colemanite deposit in the west, potentially providing a valuable alternative source of supply.

On this note, Francis said, “That two of China’s largest and most established state-owned enterprises have entered into these agreements is a testament to the strategic value of the Fort Cady project.”

He also highlighted the potential for securing offtake financing with one of the Chinese partners.

However, given that there is also strong demand in the US and Europe, there is the potential for partnering with a major glass or glass fibre manufacturer.

Fort Cady hosting a strategically important mineral with extremely low capital expenditure costs, and it is the most advanced borates project in the market.

Given the current share price only implies 2% of the net present value of the project, Francis believes ABR offers compelling investment metrics.