When a company’s share price doubles and then halves in the space of four months, the share price which should truly reflect fair value tends to be lose all of its relevance.

All sorts of factors outside the value of the company’s assets, its operational achievements and its prospect for further success can accelerate a sell-off.

Many traders these days use charting tools and algorithms that generate buy and sell signals based purely on factors such as movements in the share price and trading volumes.

While there are a myriad of systems used by retail and sophisticated investors, the problem for companies at the mercy of frenzied sellers is that for the best part they deliver the same signals.

Consequently, a 20% fall in a company’s share price can take it to a trigger point for extensive selling, and as stop loss alerts promote a ‘sell at all costs’ mentality, any sense of valuation goes out the door.

Though this is extremely frustrating for companies, it can represent a buying opportunity.

That said, there is the challenge of assessing fair value, and that is where it pays to return to fundamental analysis, very much the domain of brokers.

As we referred to earlier, the following chart demonstrates the short and sharp uptick in share price followed by a complete reversal in the space of two months. 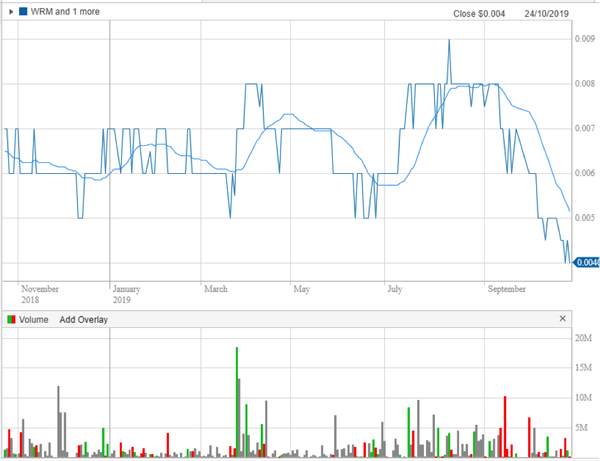 Note the high volume buying in March which saw the company’s shares increase 60% on the back of financial and operational support for the group’s Red Mountain Project.

This was a show of confidence from one of Australia’s most successful miners in terms of its ability to transition an unproven piece of ground to a multi-million-dollar production project.

The company that came in to back White Rock was the $970 million Sandfire Resources (ASX:SFR), and its decision was shaped by the WRM’s significant exploration success in 2018, a factor that appears to have been lost on the broader market this year.

What the brokers are saying

Breakaway Research senior analyst Mike Harrowell recently ran the ruler across White Rock, and his base case valuation of 2.5 cents per share implies upside of 525% to this morning’s opening price.

His valuation takes into account the group’s recent rights issue which he sees as a ‘watershed moment for the company’.

Unfortunately, it would appear that some sections of the market viewed this as a negative development as it coincided with a sharp sell-off in the group’s shares.

While there is the issue of earnings per share dilution when new shares are issued, at this stage in the company’s progress from explorer to developer to producer, it is the big picture that counts.

On this note, Harrowell said, ‘’If supported by the market, White Rock will have the funds to progress the DFS (definitive feasibility study) and EIS (environmental impact study) of its 100% owned Mt Carrington Gold Silver Project, while Sandfire funds the exploration of White Rock’s Red Mountain zinc and precious metals project in Alaska.’’

With significant focus on Red Mountain it could be argued that White Rock’s Mt Carrington gold-silver project in New South Wales has been forgotten.

However, ignore this at your peril as the relatively advanced project has an established resource of 341,000 announced gold and 23.2 million ounce silver.

Harrowell values this asset at $47.3 million with $8 million of capital expenditure required after potential funding from Cartesian, a major shareholder (4.7%).

Mt Carrington is shovel ready with a PFS already completed on the existing mining lease and $20 million of infrastructure already in place.

The initial mine life is between four and five years plus a possible 2 to 3 years for silver.

The implied financials point to a discounted net present value of about $72 million based on the current Australian dollar gold price, with anticipated free cash generation of $95 million and a payback period of 11 months.

Importantly, this could have a marked impact on White Rock’s ability to fast track the Red Mountain Project, to a significant extent derisking a potential development on the score of funding.

Based on a 100% rights take up in terms of this month’s entitlement offer prospectus, Harrowell values the Mount Carrington asset alone at 1.7 cents per share, implying upside of approximately four-fold to the company’s current share price.

Cash of $5.4 million and other assets account for the remaining 0.8 cents of his valuation.

While 2.5 cents is a long way from where the company is trading at the moment, it should be remembered that these numbers are for the best part built around hard and fast financial metrics such as the validated size of resource and how this relates to production, capital expenditure, production costs and commodity prices.

Looking at it from another perspective, with cash of $0.002 cents per share, based on the current share price investors are getting a relatively high value project in Mt Carrington, as well as the Red Mountain Project for $0.002 cents.