HDY received the second field trip update report from the SRK Consulting and Condor Prospecting teams, which focuses on the north-east part of the tenure. The report provides incremental evidence there is significant exploration upside at the mine. As such, HDY has decided to proceed with exercising the option to acquire NVM.

Notably, an old open pit, surface historical workings and mineralised veins, were discovered — none of which have been previously identified. Evidence of a mineralised vein outcropping was found 100m before and 250m after the second open pit (65m long, 2.5m wide, 3m deep) that aligns with the main open pit south-west of the historic processing plant.

Collectively, these observations confirm the mineralised vein running through tenure is at least 50% larger than the 0.9-1 kilometres originally envisaged.

Significantly, other than the known open pits and small historic workings, much of the mineralised vein appears untouched and exposed at surface

Mineralisation observed in the north-east section — hematite, pyrite, copper and vanadate minerals — was consistent with the geology in the main open pit south-west of the processing plant.

The clear visible extension of the mineralised vein at surface to the north-east across tenure up to 1.5 kilometres long highlighted the degree of exploration upside across NVM. These new discoveries have been measured and evaluated, with the thickest observations outlined the updated tenure map below. 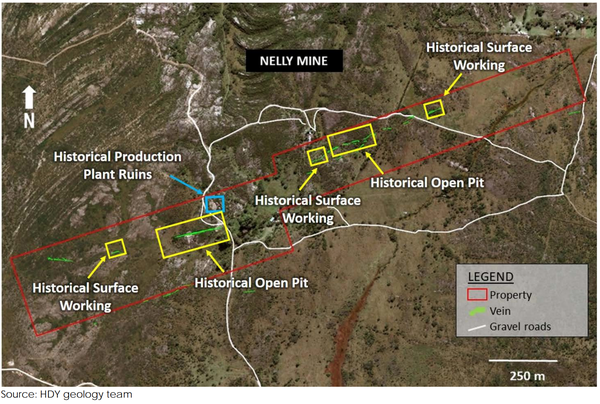 Highlights from the second day

Around 400m north-east from historic processing plant ruins there is a mineralised vein outcropping adjacent to a small legacy working area 2m by 2m and 1.5m deep. The vein’s general mineralisation trend is a south-west to north-east strike, with outcropping in portions over 6-10m distance. Notably, numerous mineralised clasts are surrounding the vein and working area.

A further 100m along from the small historic working area, in the same north-east direction, is the newly discovered open pit, which is in the same orientation as the pit in the south-west section of the tenure. This new pit strikes south-west to north-east and is 65m long, 2.5m wide and 3m deep.

Interestingly, a portion of the vein remains untouched while the mineralisation is identical to other historic working areas. In addition, there is another stockpile which brings the total across the tenure to ten in total.

The type of mineralisation observed in the north-west open pit is hematite, pyrite, copper minerals, green and yellow vanadate and black minerals.

A further 250m to the north-east of the open pit another mineralised vein outcropping – over a 5m distance – was observed. Adjacent to the outcrop was a surface workings area 4m by 5m and 1.5m deep, with a small residual rock pile. Visual observations of the rocks within the pile showed hematite and veining which confirm the extension of mineralisation into this area. Specifically, the veining and minerals can be seen on within the outcrop.

The fact the north-east vein and historic surface workings are an aligned extension from the main open pit south-west of processing plant ruins (implying at least a 1.5km mineralised vein system), illustrates the huge exploration potential still apparent within the NVN tenure.

The image below is the open pit north-east of the historic processing plant. On the left side it shows part of the vein left untouched, while the host rock is on the right side. This open pit has the same orientation as the main pit located in the south west section.

This is a significant discovery as further work must be carried out to determine the design of the mineralisation in place and vein dimensions. This includes detailed surface mapping and an inaugural drilling program.

Final stages of due diligence underway: option to acquire Nelly Vanadium Mine

Although SRK’s final site visit report remains outstanding, the Board is satisfied due diligence is complete and have decided to exercise the option to acquire NVM

As such, HDY should soon be in a position to advise the vendors of Nelly Vanadium Pty Ltd that it is exercising the option to acquire NVM with immediate effect.

The other key factor swaying the HDY’s decision is the favourable outlook for vanadium demand and the opportunity for new supply chains from Argentina and Australia to be evolved. In particular, Nelly Vanadium Mine may meet this objective, given it can be re-opened relatively quickly and the legacy stockpiles potentially monetised as a direct shipping ore vanadium product.

HDY Executive Chairman, Terence Clee commented: “The new discoveries in the north-east part of the tenure which confirm the likelihood of an extended mineralised vein that is largely untapped is exciting news. Taking into account the geology team’s findings and prevailing global demand outlook for vanadium, the Board has decided to proceed with exercising the option to acquire Nelly Vanadium Mine.”