However, there have also been important macro developments that have come into play in recent weeks that arguably place even greater emphasis on upcoming events.

In recent weeks, the company traded as high as .009 cents, representing a gain of 80% in less than a month.

This has been under particularly strong volumes, and if the company goes on to surpass the psychological 1 cent per share mark, technical investors could well be attracted to the stock.

Leveraged to gold and silver

White Rock’s VMS Red Mountain Project has an Inferred Mineral Resource of 9.1 million tonnes at 12.9% zinc equivalent of which silver and gold account for a significant proportion of mineralisation.

The group’s other key asset is the Mt Carrington project in New South Wales which could be brought into production at relatively short notice.

It is a precious metal asset with a resource of 341,000 ounces of gold and 23.2 million ounces of silver with potential for resource expansion through exploration.

Consequently, as well as offering gold exposure, the group is strongly leveraged to the burgeoning silver price which is represented by the black line below, illustrating how it has even outperformed gold (green line) during the recent rally. 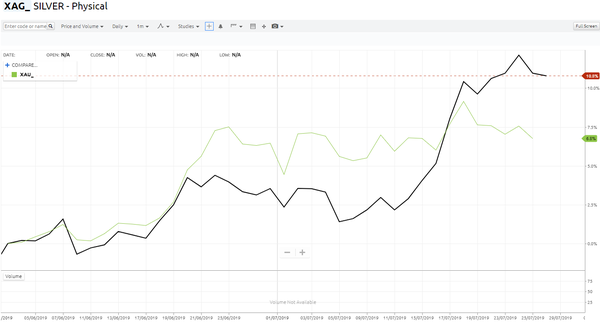 However, gold’s performance can’t be understated with the precious metal having gained US$150 per ounce in just over two months, and what investors need to understand is that they get two bites of the cherry with White Rock.

Gold and silver credits (and copper and lead) have the potential to substantially drive down the costs of production at what is shaping up as a large/low-cost zinc project at Red Mountain.

Because activity around the Red Mountain Project is so intense and the current exploration campaign could increase the size of the deposit to what would be a game changing level for White Rock, the Mt Carrington project tends to be overlooked.

However, the advanced gold-silver epithermal project is supported by an impressive prefeasibility study (PFS) conducted in 2017 based on a maiden ore reserve of 3.5 million tonnes at 1.4 g/t gold for 159,000 ounces of gold within a resource of 341,000 ounces of gold and 23 million ounces of silver.

During the quarter, strong Australian gold prices have encouraged the company to continue to explore avenues to advance the Mt Carrington Project with interested parties and several corporate advisory groups.

With the current Australian dollar gold price in excess of $2,000 per ounce there is the potential for Mt Carrington to generate a significant return on investment with an NPV8 at 2 times capital expenditure, $80 million in free cash flow generation, an internal rate of return (IRR) of 70% and a capital payback of just 13 months.

The financial model applied in the PFS assumed a long-term consensus gold price of $1700 per ounce in Australian dollar terms.