Despite extreme volatility in equities markets, gold remains on the radar of many investors as it continues to trade above US$1700 per ounce.

The company’s shares hit a high of 5.5 cents in morning trading, representing an increase of 15% on Friday’s close of 4.8 cents.

It is important to note though that Exore has been a building story with its shares doubling over the last month as impressive drilling results have come to hand.

These included the discovery of a new zone of mineralisation which is yet to be taken into account in terms of its potential contribution to the mineral resource.

The maiden resource of just over 6.6 million tonnes at 2.5 grams per tonne for 530,000 ounces provides a particularly strong platform for a company that still has substantial scope for exploration upside.

One of the impressive features of today’s release was the extremely modest costs of discovery of US$8.00 per ounce.

Exore is financially robust with approximately $13 million in cash as at 31 March, 2020, providing the group with sufficient funds to continue the active exploration program that management has flagged.

As indicated below, the former accounts for a large proportion of the resource, but it is worth noting the higher grade mineralisation at Veronique, and it is also important to take into account that there has only been nominal drilling conducted at the deposit where 90% of the estimated resource is in the top 100 metres.

Given the Veronique deposit remains open in all directions with just one zone being the subject of less than 3000 metres of reverse circulation drilling, the scope for expansion appears promising.

Managing Director Justin Tremain provided some insight into the results, as well as pointing to the significant opportunities for the group to grow the resource in saying, ‘’The release of Exore’s maiden Mineral Resource Estimate is based on the company’s exploration efforts over little more than a year since acquiring the project and at a time of near record high gold prices.

‘’We view the maiden Mineral Resource Estimate of well in excess of half a million ounces of gold at 2.5g/t as an interim resource with scope for growth with additional drilling.

‘’The Antoinette deposit remains open in all directions, along strike and down dip, with the Mineral Resource Estimate covering just 1,000 metres of several kilometres of strike potential.

‘’The Veronique deposit also remains open in all directions with the Mineral Resource Estimate considering just the one zone of mineralisation which has been subject to less than 3,000 metres of reverse circulation drilling, with several additional zones remaining undrilled.

‘’Notwithstanding the challenges posed by restrictions imposed by the COVID-19, Exore continues to undertake field exploration programs, including drilling.

‘’The company is in an excellent financial position with just under $13 million of cash.”

As we mentioned, both deposits remain open along strike and at depth, and importantly management has already identified several undrilled exploration targets within five kilometres of both deposits.

Recent drilling along strike to the south of Antoinette returned encouraging results which are not included in the current Mineral Resource Estimate.

Interestingly, this was a step out hole along strike which is arguably even more important strategically as it will assist management in developing and directing its exploration program.

Close to large long-life projects, including 4.2 million ounce Tongon mine

The project area is positioned on the prolific Syama gold belt which extends across southern Mali into northern Cote d’Ivoire.

Interestingly, in the face of COVID-19 Barrick Gold’s shares have soared 80% since mid-March. 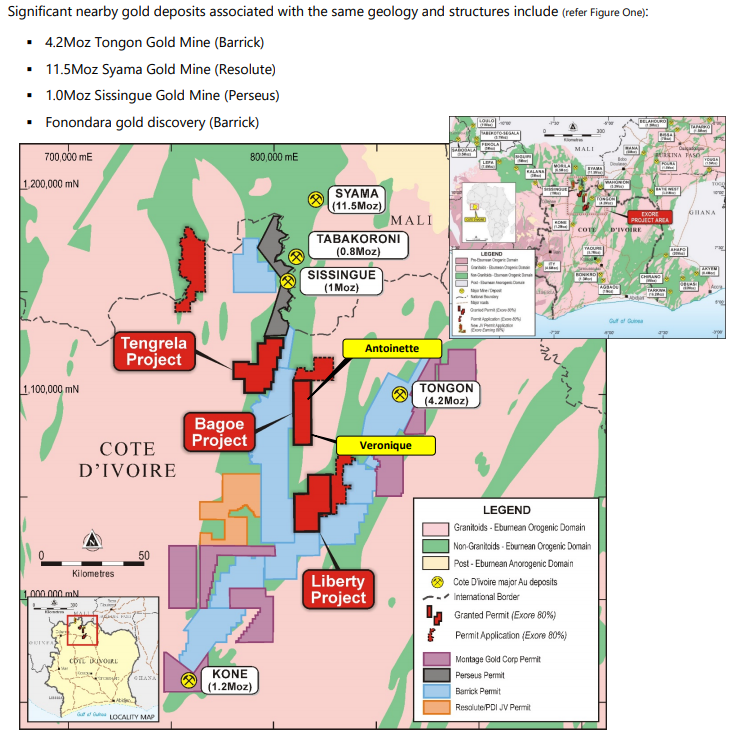 The proposed development scenario for the deposit is an open cut (pit) mine.

No additional mining dilution has been applied to the reported estimate.

Metallurgical test work has been undertaken on oxide and transitional material at Antoinette Central and Antoinette South which returned promising gold extraction rates of 93.7% to 97.1% through cyanide leaching.

Further metallurgical test work is planned on primary mineralisation at Antoinette Central, however, preliminary test work indicates more than 90% of the gold may be recovered to a high-grade concentrate from sulphide flotation.

Metallurgical test work was carried out on primary mineralisation at Antoinette West.

Cyanide leach tests were carried out on a composite sample of primary mineralisation at Veronique from a diamond core hole.