Electra JV “obviously in the right place” after sampling

The head of the Lithium Australia (ASX:LIT) Alix Resources (CN:AIX) joint venture says it is “obviously in the right location” after latest round of drilling at its Electra lithium project in Mexico.

Joint venture partner LIT told the Australian market late last week that sampling at the Senora Project in Mexico came back with lithium values of up to 246 parts per million lithium.

It said that this confirmed a target sedimentary assemblage with the potential of having lithium-bearing, clay-rich horizons.

The Buenavista deposit is within the Sonora Porject, a joint venture between Bacanora and REM which was at the centre of a lithium hydroxide supply deal inked with auto giant Tesla late last year. 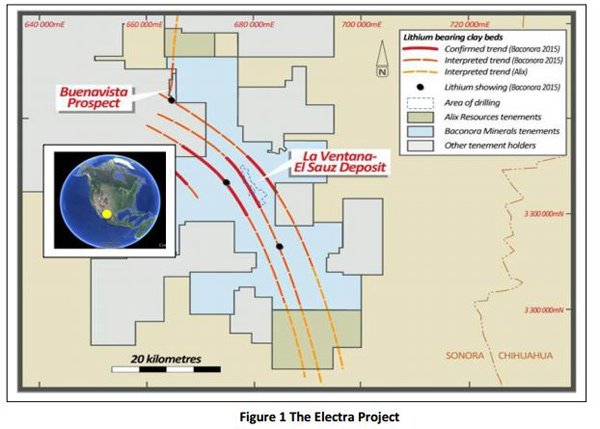 The Electra lithium project in Mexico

The LIT/AIX joint venture gathered 42 samples from claystones, sandstone and siltstones from its target sedimentary sequence – which bore an average lithium value of 167ppm.

Both parties will now get to work on another round of sampling at the project, followed by a series of shallow drill holes as part of a drilling campaign.

These drill holes are not guaranteed to hit lithium mineralisation.

England, however, said the first round of sampling had a huge validating effect.

“We are obviously in the right location and the mineralisation to date found on the property is very promising to our exploration team,” he said.

Back in May LIT confirmed that it had taken the first 25% interest as part of an overall program which could earn LIT a 65% stake in the project.

LIT will be hoping to apply its ‘Sileach’ processing process to the project – proving that the process is good for processing clays as well as hard rock sources.