With due diligence now complete, ASX junior Delecta (ASX:DLC) has exercised the option to acquire the Highline cobalt and copper mine.

This acquisition is a key component of DLC's strategy to diversify its operations and capitalise on the accelerating demand for battery minerals.

DLC reported today that underground sampling of the Highline mine has confirmed the high-grade nature of the previously exploited mineralisation. Results have indicated the presence of high-grade cobalt and copper mineralisation, including:

Furthermore, stream sediment sampling results from the mine have included:

As mentioned, with the due diligence process now complete, DLC has exercised its option to purchase, and has advised its next steps in exploration will include detailed geological mapping of identified mineralised zones to identify drill targets.

DLC managing director, Malcolm Day, commented on the milestone news: “I am very pleased with the results of the exploration program and excited to complete the acquisition of the Highline Project. The results have confirmed the high-grade nature of the project and significantly increased its potential.

“The company believes that the Highline Cobalt-Copper project represents a relatively low risk opportunity in an area of known mineralisation. The Highline acquisition is part of Delecta’s diversification strategy aimed at capitalising on the demand for battery minerals such as cobalt, lithium and vanadium,” he said.

The Highline project in more detail 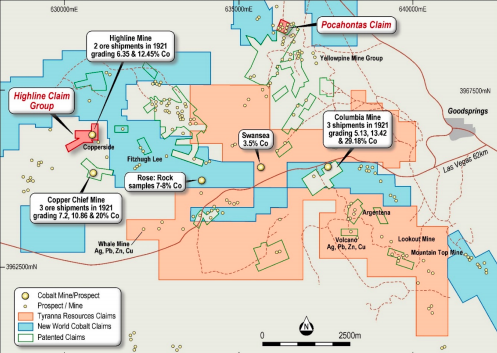 DLC completed an exploration program at Highline only recently, which also involved underground mapping of the mine and stream sediment sampling of drainages.

A total of six rock-chip samples were taken from the workings, with the sample demonstrating similar results to those completed by the vendor and reported in a previous announcement.

What’s next for Highline?

DLC has big plans for the Highline project, with a detailed exploration program consisting of geological mapping and sampling over the areas defined by the stream sediment geochemistry in the western claim.

Further, exploration of the Highline mine area is planned to determine the mineralisation controls and its extent. Each will lead DLC’s process of identifying drill targets.