Gold-copper explorer, Los Cerros Ltd (ASX:LCL) today advised that it has commenced drilling at the Chuscal gold target at its Quinchia Gold Project in Colombia with a second service provider rig.

The company also notes that its Atlas Copco C5C diamond drill rig has arrived at the port of Buenaventura, a port on the Colombian Pacific coast 320km south of Quinchia.

The rig has yet to clear customs but is planned to be drill-ready in late October, at which point the company expects to have three diamond rigs active across its Quinchia Gold Project, promising a highly active and sustained period of drilling ahead.

This near surface, vein-hosted mineralisation could offer a potential source of top-up feed to enhance the Miraflores Project feasibility economics with the proposed plant location less than 2km north.

Armed with further vectoring information from this shallow drilling, a program of deeper holes will then resume the search for causative porphyry(ies), the source of the extensive porphyry associated gold encountered over an expansive area of Chuscal.

The first hole of the Chuscal drill program (CHDDH005 - green circle on below map) will test the strike extent of high grade mineralisation encountered in previous drilling associated with the Guyacanes-Montana vein set. 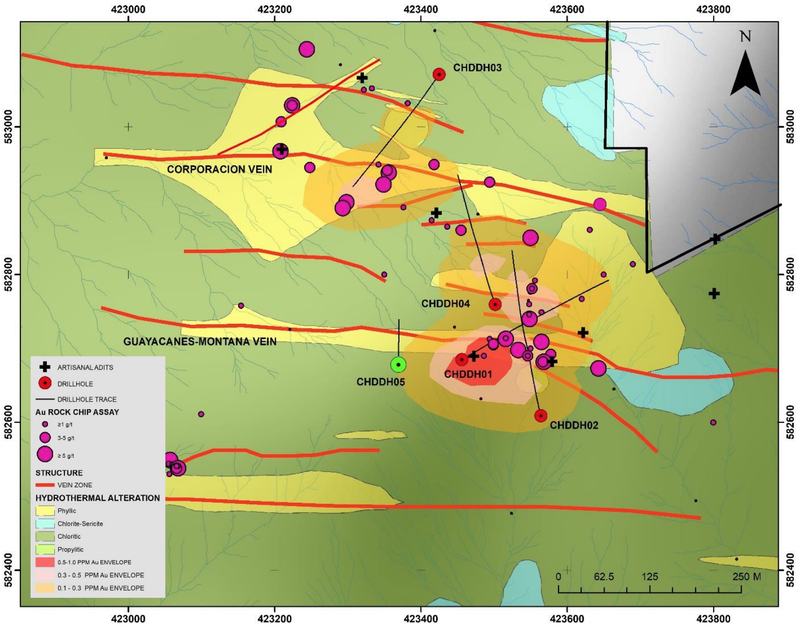 Los Cerros completed its maiden drilling program at Chuscal in January 2020. A four hole ~1,900m program demonstrated that porphyry-associated gold is more widespread than previously assumed, as evidenced by the very long drill core intercepts over an extensive area including:

Los Cerros’ Quinchia Gold Project hosts four discoveries, Miraflores, Tesorito, Dosquebradas, and Chuscal and has a total JORC Resource of 1.3Moz gold, including a JORC Reserve of 457,000oz for the Miraflores deposit.

The Chuscal target is within close proximity to the Tesorito near surface porphyry target, just 1.5km to the south.

Los Cerros is currently into the third hole (TSDH010) of the expanded program at Tesorito. The Tesorito drill rig has now returned to the southern anomaly as planned, to follow up the very broad intersections previously established.

This was most recently confirmed by drill hole TS-DH08 reported on 10 September 2020, which intersected 230m @ 1.0g/t Au from surface, including several higher grade intercepts.

These results from Tesorito hole TS-DH08, the first hole of the company’s current expanded drilling program, sent stock up 120% on the day on the announcement.

Assay results from the second diamond hole of the current drilling programme (TS-DH09) at Tesorito remain pending and are expected within the first two weeks of October.

The current (third) hole, TS-DH10, is designed to test the eastern and north eastern extent of mineralisation and target the porphyry core below the intersection recorded in TSDH08 and to the east. 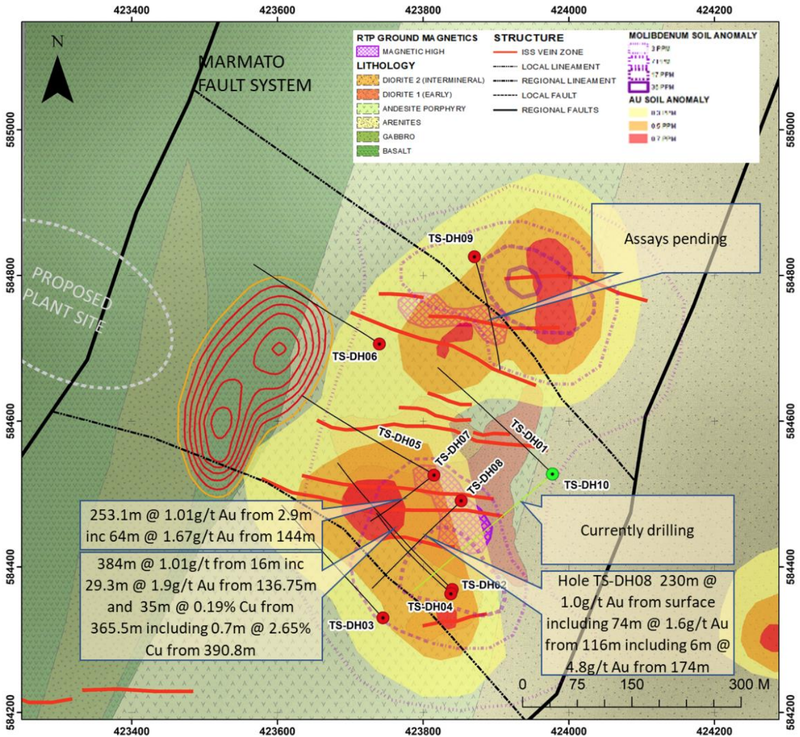